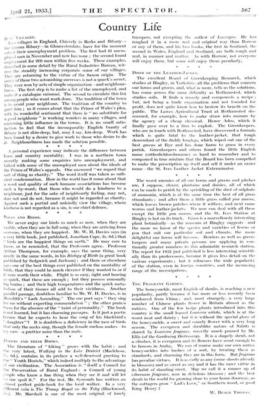 lji -v VILLAGES. 1.,%(• villages in England, Chievely in Berks and Bibury- the famous Bibury—in Gloucestershire, have for the moment soh-ed their unemployment problem. The first had 41 unem- ployed men in November and now has none ; the second found employment for 200 men within five weeks. These examples, described in some detail by the Rural Industries Bureau, wit- ness the steadily increasing corporate sense of our villages. They are returning to the virtue of the Saxon origin. The secret of these two astonishing successes is not a quack's secret. They were won by acts of simple organization—and neighbour- liness. The first step is to make a list of the unemployed, and make it a catalogue raisonne. The second to circulate this list among people who want work done. The tradition of the town is to avoid your neighbour. The tradition of the country to greet him ; so it comes about that the Prince of Wales's plea, with its wonderful sentiment that there is " no substitute for a good neighbour " is working wonders in many villages, and exercising little influence in the towns. It. is no small satis- faction to feel that the incomparably. English beauty of Bibury is not skin-deep, but, may,I say, kin-deep. Work has been found by a desire to give work to those who desire to do it. Neighbourliness has made the solution possible.