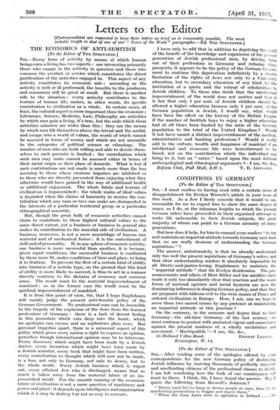 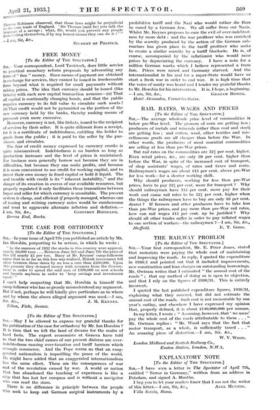 Snt,—After reading some of the apOlogies offered by your correspondents for the new German policy of destroying Jewish influence by starving thousands of perfectly innocent and unoffending citizens of the professional classes to death, I am left wondering how the bulk of our countrymen will react to them. I think, Sir, I have found the answer. May I quote the following from Boswell's Johnson ?

" Better [said he] to hang or drown people at once, than by an unrelenting persecution to beggar and starve them." " When the Corn Laws were in agitation in Ireland . . • Sir

Thomas Robinson observed, that those laws might be prejudicial to the corn trade of England. ' Sir Thomas [said he] you talk the language of a Savage ; what, Sir, would you prevent any people from feeding themselves, if by any honest means they can do it ? ' "