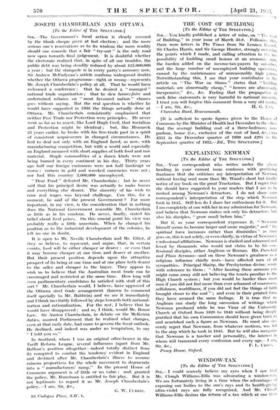 [To the Editor of THE SPECTATOR.] SIR,—Your correspondent who writes under the above heading in your current issue confesses with gratifying frankness that she criticizes my interpretation of Newman without having read more than Mr. Wand's short but kindly notice of my book on the great Tractarian. But I regret that she should have suggested to your readers that I am to be ranked among Newman's detractors. I do not share your correspondent's interpretation of the step which Newman took in 1845. Still less do I share her enthusiasm for it. But I am completely at one with her in my admiration for Newman, and believe that Newman makes not only his detractors, but also his disciples, " grow small before him."

But it as your correspondent expresses it, " Newman himself seems to become larger and more majestic," and his spiritual force increases rather than diminishes" as time goes on, this is not solely, or even chiefly, in virtue of Newman's Confessional affiliations. Newman is studied and esteemed and loved by thousands who would not claim to be his con- fessional disciples, either Anglican or Roman. His Parochial and Plain Sermons—and on these Newman's greatness as a religious influence chiefly rests—have affected men of all sympathies. Principal Shairp, the Presbyterian divine, wrote with reference to them : " After hearing these sermons you might conic away still not believing the tenets peculiar to the High Church system ; but you would be harder than most men if you did not feel more than ever ashamed of coarseness, selfishness, worldliness, if you did not feel the things of faith brought closer to the soul " ; and even in their printed form they have aroused the same feelings. It is true that no Anglican can study the long succession of writings which Newman produced while he was Vicar of the University Church at Oxford from 1828 to 1843 without being deeply gratified that 'his own Communion should have given birth to and nourished such a figure as Newman. He must also sin- cerely regret that Newman, from whatever motives, was led to the step which he took in 1845. But he will also recognize that Newman is a teacher and personality, the interest in whom will transcend every confession and every age.—I ain,