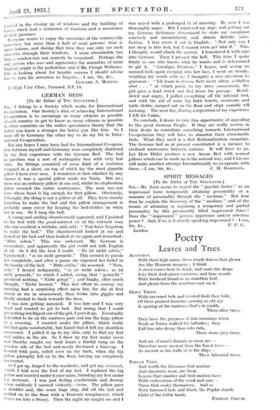 GERMAN BEDS [To the Editor of THE SPECTATOR.] SIR,—I belong

But any hopes I may have had for International Co-opera- tion between myself and Germany were completely shattered by my first experience with the German Bed. The bed in question was a sort of rectangular box with very low sides. Its fittings consisted of some kind of a mattress wrapped in a sheet, on top of which lay the most gigantic pillow I have ever seen. I wondered at first whether by any chance it was a special pillow made for Nazis. But no ; there was an ordinary pillow at one end, whilst its elephantine fellow covered the entire contrivance. The man was not born whose head is big enough for that pillow. Obviously, I thought, the thing is not a pillow at all. They have merely forgotten to make the bed and this pillow arrangement is probably some cover for keeping the bed-clothes in when not in use. So I rang the bell.

A young and smiling chambermaid appeared, and I pointed to the bed with the good-natured air of the tolerant man who can overlook a mistake, and said : " You have forgotten to make the bed." The chambermaid looked at me and looked at the bed and then looked at Inc again and remarked : Bitte schofi." This was awkward. My German is elementary, and apparently the girl could not talk English at all. So I did the best I could. " Es ist nicht schiin," I protested ; " es ist nicht gemacht." This seemed to puzzle her completely, and after a pause she repeated her belief in the beauty of the bed. " Bitte schlin," she asserted. " Nein, nein," I denied indignantly, " es ist nicht schiin ; es ist nicht gemacht," to which I added, seeing that " gemacht " produced nothing, " Nicht gelegt " ; and finally, after much thought, " Nicht besetzt." This last effort to convey my meaning had a surprising effect upon her, for she at first stared at me in amazement, then broke into giggles and finally started to back towards the door.

I was now getting annoyed. It was late and I was very tired and wanted to get to bed. But seeing that I could get nothing intelligent out of the girl, I gave it up. Eventually I decided to lie on the mattress part and use the huge pillow as a covering. I crawled under the pillow, which really did feel quite comfortable, but found that it left my shoulders uncovered: • I pulled it up to my chin, only to find my feet and ankles in the air. So I drew up my feet under cover and thereby caught my bent knees a fearful bang on the wooden side of the bed and nearly fractured a kneecap. I howled with pain, rolled over on my back, when the big pillow promptly fell on to the floor, leaving me completely uncovered.

So I got up, limped to the wardrobe, and got my overcoat, which I laid over the foot of my bed. I replaced the big pillow and crawled under it once more, thrusting my feet under thy overcoat. .I was just feeling comfortable. and drowsy when suddenly I sneezed violently—twice. The pillow gave a shudder and, like some huge slug, slid off the bed and settled on to the floor with a Teutonic complacency which drove me into a frenzy. Then the night air caught me and I was seized with a prolonged fit of sneezing. By now I was thoroughly angry. But I mastered my rage, and getting out my German dictionary determined to state my complaint concisely and unmistakably and obtain definite satis- faction. I first wrote it out in English : " Not only can I not sleep in this bed, but I cannot even get into it." This, I thought, would clinch the matter. I translated it with care into German. Then I pressed the bell. This time I spoke firmly as one who knows what he wants and is determined to get it. " Gniidiges Fraulein," I began, and seeing an amused look again creeping into her face, I went on sternly. weighing my words with (so I thought) a nice attention to grammar : " Ich kann in d:esem Bett nicht allein sehlaffen ober . . . " at which point, to my utter amazement, the girl gave a loud shriek and fled down the passage. Bewil- dered and angry, I pulled everything off the infernal bed, and with the aid of some big bath towels, overcoats and table cloths, camped out on the floor and slept soundly till morning. The next day, fearing a repetition of my experience I left for Calais.

To conclude, I desire to take this opportunity of appealing to the great German People. If they are really serious in their desire to contribute something towards International Co-operation they will have to abandon their abominable beds. What they need is a Bed Rationalization campaign. The German bed as at present constituted is a menace to civilized intercourse between nations. It will have to go. Let Herr Hitler produce a new Aryan Bed with normal pillows which can be made up in the normal way, and I for one will make another attempt Internationally to co-operate with