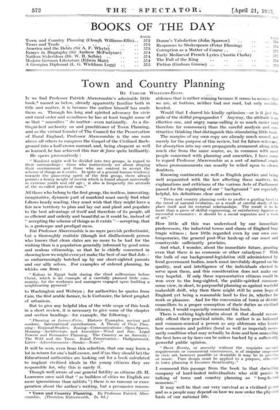 IF we find Professor Patrick Abercrombie's admirable little book,* named as below, already apparently familiar both in title and matter, it is because the author himself has made them so. Through his long and. spirited advocacy for civic and rural order and seemliness he has at least taught some of us that amenities " do matter—even nationally. As a dis- tinguished authority on and practitioner of Town Planning, and as the virtual founder of The Council for the' Preservation of Rural England; Professor Abercrombie is the one man above all others to compress the Gospel of the Civilized Back- ground into a half-crown manual, and, being eloquent as well as learned, he has achieved this tour de force quite brilliantly.

" Mankind might well be divided into two groups. in regard to their surroundings : .those who instinctively set about shaping their environment . and those who are content to accept the scheme of things as it exists. In spite of a general human tendency towards the pioneering spirit of the first group, there always persists a heaNy weight of inertia which is found almost universally in extreme youth and old age ; it also is frequently the attitude of the so-called practical man."

All those who belong to the first group, the restless, innovating, imaginative, dynamic part of mankind must surely find what follows heady reading, they must wish that they might have a fair new territory to plan and lay out and plant and populate to the hest advantage of itself and therefore of its people, all as efficient and orderly and beautiful as it could be, instead of " accepting the scheme of things as it exists "—accepting, that is, a grotesque and prodigal mess.

But Professor Abercrombie is no mere peevish perfectionist, but a thoroughly realistic (though not disillusioned) person who knows that clean slates are no more to be had for the wishing than is a population generally informed by good sense and zealous citizenship, so that he is chiefly concerned in showing how we might even yet make the best of our Bad Job= so embarrassingly botched up by our short:sighted parent's and our silly selves. For examples of ordered planning, he whisks one from : •

" Kahun in Egypt built during the third millennium before Christ, which is an _example of a carefully planned little com- munity, for the workmen and managers engaged upon building a neighbouring pyramid "

to Washingto- n and Welwyn ; for authorities he quotes from Cain, the first arable farmer, to he CorbUsier, the latest prophet of urbanism.

But to give any helpful idea of the wide scope of this book in a short review, it is necessary to give some of the chapter and section headings—for example, the following :

It will be seen, even from this selection, that one may learn a lot in return for one's half-crown, and if (as they should be) the Educational authorities are looking out for a book calculated to implant civilized ideals in the young citizens they are responsible for, why this is surely it.

Though well aware of our general futility as citizens (D. H. Lawrence once said that " as builders of cities we English are more ignominious than rabbits'') there is no rancour or exas- peration about the author's-writing, but a persuasive reason- * Town and Country Planning. By Professor Patriek crombie. (Thornton Butterworth. 2s. 6d.) ableness that is rather winning because it seems to assume that we are, at bottom, neither bad nor mad, but only _muddle-

Would that I shared his kindly optimism—or is it just the guile of the skilful propagandist ? Anyway, the attitude is an effective one, and angry name-calling is so much easier (and therefore far commoner) than the careful analysis and con- structive thinking that distinguish this stimulating little book.

The margins-of my own copy are already, much scored, not merely for the purpose of this review, but for future reference, for absorption into my own propaganda armament along with much else front the same source, as, in common with most people concerned with planning and amenities, I have conic to regard Professor Abercrombie as a sort of .national oracle whose pronouncements. can usually be relied upon to silence doubters.

Knowing continental, an well as English practice and being well acquainted with the law affecting these matters, his explanations and criticisms of the various Acts of Parliament passed for the regulating. of our " background " are especially helpful, his definitions clear and succinct.

" Town and country planning seeks to proffer a guiding hand to the trend of natural evolution, as a result of careful study of the place itself and its external relationshijas. The result is to be more than a piece of skilful engineering, or satisfactory, hygiene or successful economics : it should be a social organism and a work of art."

How little all this was understood by our immediate predecessors, the industrial towns and slums of England bear tragic witness ; how little •Tegarded even by our own con- temporaries, the general post-War hash-up of our coast and countryside sufficiently proclaim.

And what, I wonder, about the immediate future, granting even that there is no economic or other cataclysm ? With the bulk of our background-legislation still administered .by local government bodies, much must inevitably depend on the quality, zeal and intelligence of the individuals elected to serve upon them, and this consideration does not make one very hopeful. If only these representative citizens could be won over to the long-sighted, . the public-spirited. common- sense view, in short, to purposeful planning as againSt wasteful makeshift drift, why, then,' there might, still be some hope of England yet being a, reasonable land to live.,in, whether for work or pleasure. And for. he conversion of town or district councillors to a proper conception of their duties as civilized citizens, I would especially commend this book. There is nothing high-falutin about it that should reason- ably offend their practical minds, the author is as balanced and common-sensical a person. 45 any alderman who knows how economics and politics (local as well as imperial):ncees- sarily condition what may actually be done and hownnavailing the best laws or by-laws canbe unless backed by a sufficiently powerful public opinion.,..

" Sheer Beauty, or amenity without the - requisite, sanitary requirements or commercial convenience, is of -singular.emptineso in civic art, hewever possible or desirable' it may be in painting or music. Pure design must be applied to a purpose; otherwise in town planning it becomes theatricality."

I commend this passnge from the book to that dwindling company of hard-boiled individualists who still persist in talking of town' and country planning as " long-haired nonsense."