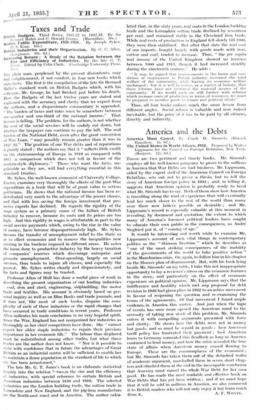 British Industries and their Organization. By O. C. Allen. (Longman. 10s. 6d.) Increasing Return :. A Study of the Relation between the Size and Efficiency of Industries. By. the late G. T. Jones. Edited by Colin Clark. (Cambridge University Press. 1

THE plain man, perplexed by the present discontents, may hind enlightenment, if not comfort, in four new books which state facts. The first-is the compilation of the late Sir Bernard 31allet's standard work on British Budgets which, with his

colleague, Mr. George; he had finished just before his death. Here the Budgets of the last twelve years are stated and explained with the' accuracy and clarity that we expect from the authors, and a dispassionate commentary is appended. " The burden of taxes and rates must be somewhere between one-quarter and - one-third. of the national income." That income is falling. The problem, for the authors, is not whether the cost of the social services will be unduly cut down, but whether the taxpayer can continue to pay the bill. The real burden of the 'National Debt, even after the great conversion of War Loan, " nlaY Possibly remain greater than it was in 1921-22." The' position of our War debts *and of reparations -

is plainly- stated ; -'the authors say that it " reflects little credit on the statesnianShip of Europe in 1919 as compared with

1815—a coMparison which doeS not tell in favour of the modern-style diplomacy." Those who 'want the facts, un- palatable as• they are, will find everything' essential in this standard treatise.

expenditure in a book that will be of great value to serious politicians. He Shows that the national income has been re- distributed very much to the advantage of the poorer classes, and that with less saving the foreign investment that pro- motes experts has' declined. He regards the rigidity of tIM wage system as a primary cause of the failure of British industry to recover, because its costs and its prices are too high. And this rigidity in wages is attributable in part to the social service payments which, owing to the rise in the value

favours the transfer of unemployment relief to the State so as to effect economies and to remove the inequalities now existing in the burdens imposed in different areas. He notes the harm done to productive industry by the heavy taxation of companies' reserves which discourage enterprise and promote unemployment. Over-spending, largely on social services, thus tends to injure all classes, and especially the poorest. Mr. Sykes writes clearly and dispassionately, and his facts and figures may be trusted. •

L—coal, iron and steel, engineering, shipbuilding. the motor 'trade arid•teXtileS. His account is obviously based on per-

sonal inquiryas well as on Blue Books and trade journals, and

it does not;" ike most of such books, disguise the com- plexity of each' Of these industries or the rapid changes that- have occurred in 'trade cOnclitions'in recent years. Professor Allen indicates his main conelnsions in no very hopeful spirit. Since the War, England has not reorganized her industries as thoroughly as her chief conipetitori have done. She " cannot

expect her Older staple' industries to regain their previous importance in her economic life." The labour thus displaced

must be redistributed among other trades, but what• those trades are the author does not know. " Nor is it possible to state with confidence that in future the advantages of Great Britain as an industrial centre will be sufficient to enable her to maintain a dense population at the standard of life to which she has been accustomed."

The late -Mr: G. T. Jones's book is an elaborate statistical inquiry into the relation 1—tween the size and the efficiency - of industries, with special reference to certain. British and American industries between 1850 and 1910. The selected. industries ere the London building trade, the cotton trade in Lancashire and- New England, and the pig-iron manufacture on the North-east coast and in America. The author calcu-

lated that, in the sixty years, real costs in the London building trade and the Lancashire cotton trade declined by seventeen per cent, and remained stable in the Cleveland iron trade, While real costs of production in England fell slowly till 1900, they were then stabilized. But after that date the real cost of our imports, bought largely with goods made with iron, cotton and coal, tended to increase. Thus, " the per capita real income of the United Kingdom showed no increase between 1900 and 1913, though it had increased steadily during the nineteenth century." He adds : .

" It may be argued that improvements in the hours and con- ditions of employment in British industry increased the total welfare of the community, while leaving its economic welfare unchanged; but it is well to realize, as a matter of history, that the.so reforms have not increased the material income of the community. If we would push on still further with reforms which increase costs of production in terms of resources, we must be prepared to sacrifice goods to leisure and political ideals."

Thus, all four books enforce much the same lesson from different angles. Social reform is valuable and now indeed inevitable, _but the. price of it has to be paid by all citizens, directly and indirectly,