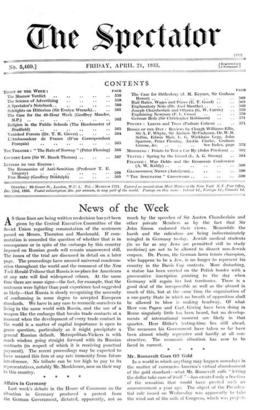 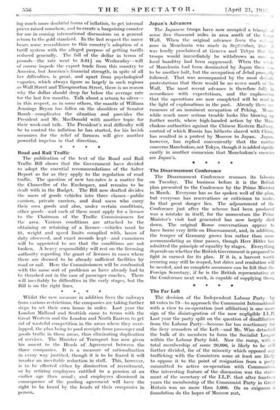 Mr. Roosevelt Goes Off Gold In a world in which

anything may happen nowadays in the matter of currencies America's virtual abandonment of the gold standard—what Mr. Roosevelt calls " letting the dollar take care of itself "—has created only a fraction , of the sensation that would have greeted such an announcement a year ago. The object of the Presiden- tial rule issued on Wednesday was apparently to take the wind out of the sails of Congress, which was project- ing much more doubtful forms of inflation, to get internal prices raised somehow, and to create-a bargaining-counter for use in coming international discussions on a general return to the gold standard. In the last respect the move bears some resemblance to this- country's adoption of a tariff system with the alleged purpose of getting tariffs reduced generally. The fall of the dollar in terms of pounds—the rate went to 3.611 on Wednesday—will of course impede the export trade from this country to America, but America's financial strength, in spite of all her difficulties, is great, and apart from psychological vagaries, which always figure so largely in such regions as Wall Street and Throgmorton Street, there is no reason why the dollar should drop far below the average rate for the last few months. Talk about a return to silver— in this respect, as in some others, the mantle of William Jennings Bryan has fallen on the shoulders of Senator Borah7-complicates the situation and provides the President and Mr. MacDonald with another topic for their week-end talk. The President's real difficulty will be to control the inflation he has started, for his lavish measures for the relief of farmers will give another powerful impetus in that direction.