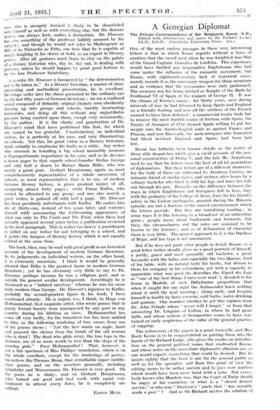 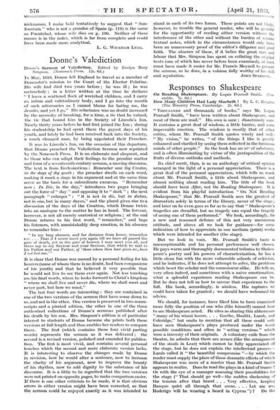 The Private Correspondence of Sir Benjamin Keene, LB., Edited with introduction and notes by Sir Richard Lodge, LL.D., Litt.D. (Cambridge University Press. 25s.) ONE of the most curious passages in these very interesting letters is that in which Keene reports without a trace of emotion that the sword used when he was knighted was that of the Grand Captain, Gonsalvo de Cordoba. This experience would have thrilled any imaginative Englishman who had

come under the influence of the romantic movement, but Keene, with eighteenth-century lack of historical sense, merely records it as the customary weapon for these occasions and as evidence that the ceremonies were duly performed. The occasion was his being dubbed as Knight of the Bath by Ferdinand VI of Spain at the request of George II. It Was the climax of Keene's career ; for thirty years, save during intervals of war, he had laboured to keep Spain and England on a friendly footing,.and now all the artifices of the French seemed to have been defeated ; a commercial treaty bade fair to remove the most fruitful source .of friction with Spain, the Treaty of Aranjuez of 1752 showed Spain willing to put her weight into the Austro-English scale as against France and Prussia, and now Ensenada, the arch-intriguer who fomented bad blood between England and . Spain, had been laid low.

Keene has hitherto been known chiefly as the writer of those able despatches which give a vivid account of the per- sonal eccentricities of Philip V, and the late Mr. Armstrong used to say that his letters were the best of alt his generation of diplomatists. But these letters are of a different character, for the bulk of them arc addressed to Abraham Castres, an intimate friend of similar tastes, and written after. hours by a solitary bachelor who liked to fold his legs and have his talk out through his pen. Remarks on the difference between the ways in which Englishmen and foreigners fall -in- love, fury with the pedantry of the College of Arms, fears for his friend's safety in the Lisbon earthquake, anguish during the Minorca episode, are but a fraction of the varied entertainment which the letters provide. But they are tantalizing reading ; in some ways it is like-listening to a broadcast of an unfamiliar game ; people move about backwards and forwards, but they, the circumstances and the rules are assumed to be known to the listener ; and so of delineation of character there is very little. The nearest approach to it is the Duchess of Bejar, and her type is not uncommon. . .

But if he does not paint other people in detail, Keene, as a good letter writer should, gives us a good. portrait of himself, a portly, grave and most agreeable old bachelor, a great favourite with the ladies and especially the two Queens, fond of his table, with no natural taste for books, but driven to them for company in his solitariness, yet with a capacity to appreciate what was good (he describes the Esprit des Linz as "one of the best things I have ever read"), devoted to his house in Madrid, of such Babylonian proportions that when it caught fire one night the Ambassador knew nothing about it until the next morning ; rising early, and keeping himself in health by horse exercise, cold baths, water drinking and quinine. One wonders whether he got this regimen from Dr. John Pringle whom never will I forget," or from that interesting Dr. Linguier of Lisbon, in whom he had great faith, and whose system of therapeutics scents to have con- tained an early scepticism of the value of the general practice of cupping.

The rediscovery of the papers is a great trourailk, and Mrs. Ruck Keene is to be congratulated on putting them into the hands of Sir Richard Lodge, who gives the reader an introduc- tion on the general political issues that confronted Keene, and whose notes on the immediate diplomatic allusions are, as one would expect, everything that could be desired. But he insists rightly that the book is one for the general public as well as for the specialist, and from this point of view the editing seems to be rather uneven and to pass over matters which would have been more lueid with a note. Not every- body knows who Mandrin was, that the Court orturin should. be angry at his execution, or what is a " eharol dessert service," or who Was " Dunkam's " uncle that " was recently made a peer " ? And as Sir Richard invites the solution of

nicknames, I make bold tentatively to suggest that " Sun- fountain ". who is not a grandee of Spain (p. 119) is the same as Fuentelsol, whose wife dies on p. 190. Neither of these names is in the index, which is far from complete and could have been made more analytical.