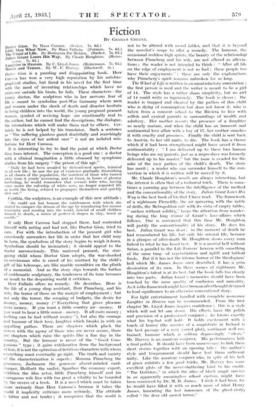 Doctor Gion is a puzzling and disappointing book. Herr Carossa has won a very high reputation by his autobio- graphical studies, but faced in his novel for the first time with the need of inventing relationships which have no existence outside his brain, he fails. These characters—the young doctor, the sculptress who in her nervous fear of life is meant to symbolize post-War Germany where men and women under the shock of death and disaster hesitate to bring children into the world, the young pregnant peasant woman, symbol of reviving hope—are emotionally real to the author, but he cannot find the descriptions, the dialogue, the intonations which will make them real to others. Cer- tainly he is not helped by his translator. Such a sentence as " The suffering giantess gazed doubtfully and searchingly into the eyes of her ardent suer" is not an isolated mis- fortune for Herr Carossa.

It is interesting to try to find the point at which Doctor Gion loses interest. The conception is a good one : a doctor with a clinical imagination a little obsessed by symptoms

studies from his surgery " the prison of this age."

" Daily he had been assailed by dishearien. ed spirits, inimical to all now life ; he saw the joy of existence gradually diminishing in all classes of the population, the numbers of those who turned away from it yearly increasing, and at times, in hours of gloomy foreboding, ho would remember that oceanic tribe who, having come under the rulership of white men, no longer regarded life as worth the living, refused to propagate themselves and quickly died out."

Cynthia, the sculptress, is an example of this new attitude :

" He could not but honour the ruthlessness with which she wished to conquer the demon of the age by repudiating her inmost femininity and sending into the world, instead of small children dooned to death, a series of perfected shapes in clay, wood or marble."

If only Herr Carossa had stopped there, had contented himself with noting and had not, like Doctor Gion, tried to cure. For with the introduction of the peasant girl who consciously surrenders her life in order that her child may be born, the symbolism of the story begins to weigh it down. Symbolism should be insinuated ; it should appeal to the reader unconsciously. This maternal peasant, the star- gazing child whom Doctor Gion adopts, the war-shocked ex-serviceman who is cured of his mistrust by the child's gift of his telescope, are like marble moralities on the plinth of a memorial. And as the story slips towards the bathos of emblematic sculptuary, the tenderness of its tone becomes an insult to the despairing world it criticizes.

Herr Fallada offers no remedy. He describes. Here is the life of a young shop assistant, Herr Pinneberg, and his wife, the terror of those on the margin of employment ; but not only the terror, the scraping of budgets, the desire for money, money, money (" Everything that gives pleasure costs money. If you want a little country air—money. If you want to hear a little,music—money. It all costs money.; nothing can be had without money "), but also the courage and humour of their love, laughter which breaks in with an appalling pathos. There are chapters which pluck the nerves with the agony of those who are never secure, there arc chapters which raise the spirits like a fine day in the country. But the humour is never of the " Good Com- panions " type ; it gains exhilaration from the background of fear, it is not the optimism of fictitious characters with whom everything must eventually go right. The truth and variety of the characterization is superb : Mamma Pinneberg the procuress, Jachmann the generous absent-minded card- sharper, Heilbutt the nudist, Spanfuss the economy expert, Sehliiten the film actor, little Pinneberg himself and his courageous wife live with too great a vitality to be bounded by the covers of a book. It is a novel which must be taken more seriously than Herr Carossa's because it takes the world it implicitly criticizes more seriously. The attitude is bitter and not tender ; it recognizes that the world is

not to be altered with moral fables, and that it is beyond the novelist's scope to offer a remedy. The humour, the occasional reckless high spirits, the beauty of the relationship between Pinneberg and his wife, are not offered as allevia- tions ; the reader is not intended to think : " After all life on the edge of employment is not so bad ; these people too have their enjoyments ; these are only the explanations why Pinneberg's spirit remains unbroken for so long.

The Wheel of Life is written in an unsatisfactory convention ; the first person is used and the writer is meant to be a girl

of 14. The style has a rather sham simplicity, but no girl of 14 could write so ingeniously. The book is clever ; the reader is trapped and cheated by the pathos of this child who is dying of consumption but does not know it, who is taken from a convent school to the Riviera to live with selfish and cynical parents in surroundings of wealth and adultery. Her mother resents the presence of a daughter so nearly mature, and when the child has an innocent and sentimental love affair wills a boy of 17, her mother smashes it with cruelty and grossness. Finally the child is sent back to Austria, to her old aunts, to die. The book has a theme which if it had been strengthened might have saved it from sentimentality : " I am delivered up to these two human beings who arc my parents, just as a negro slave was formerly delivered up to his master," but the issue is evaded for the sake of the easy pathos of the child's death. The story has merit ; a reader who can surrender himself to the con- vention in which it is written will be moved by it.

Mr. Claude Houghton's novels are always interesting, but the interest is often that of a technical trick. There is some- times a yawning gap between the intelligence of the method and the conventionality of the story. Julian Grant Loses his Way is the best book of his that I have read. The framework of a nightmare Piccadilly, the air quivering with the rattle of drills, the Metropolitan eat's' with its vista of empty tables, " surface without solidity;," keeps the attention from wander- ing during the long resume of Grant's love-affairs which follows. One is convinced that this time Mr. lb:Rigida) will justify the conventionality of his story. He. does his best. Julian Grant was dead ; in the moment of death he had remembered his life, but only his sensual life; because in a glimpse of after-deaths Mr. Houghton shows everyman linked to what he has loved best. It is a mental hell without Satan, a parallel to the Life Forcers' heaven with something of the same tang—of vegetarianism and uplift and tabloid foods. But if it has not the intense horror of the theologians' hell which Mr. James Joyce once described, it has a grim dessication of its own. In these scenes of nightmare Mr. Houghton's talent is at its best, but the book falls too clearly into two parts. Julian Grand's memories should have been touched by the sante quality of Confusion and unreality. As it is the framework might have been an afterthought designed to lend significance to an otherwise conventional story.

For light entertainment handled with complete assurance Laughter in I leaven can be recommended. - From the first chapter Mr. Lloyd Jones inspires confidence ; tisk is- a style which will not let one down. His effects have the polish and precision of a professional conjurer ; he knows exactly what his top-hat will hold. It holds excitement. wills it toilet]: of horror (the murder of a magistrate in Ireland is the best passage of a very varied plot), 'sentiment well re4- trained, ' humour which is seldom depressingly ." clean." Mr. Harvey is an amateur conjurer. His iwrformanees lack a final polish. It should have been unnecessary to link these short stories together with an opening tale ; the author's style and temperament should have lent them sufficient unity. Like the amateur conjurer who, in spite of his lack of grace exhibits a few good tricks, Mr. Harvey has some excellent plots of the nerve-shattering kind to his credit. " The Dabblers," in which the rites of black magic survive in an apparently meaningless school custom, might have been conceived by Dr. M. R. James. I wish it had been, for he would have filled it with so much more of what Henry James, lamenting the lost innocence of the ghost-story, called-" the dear old sacred terror."