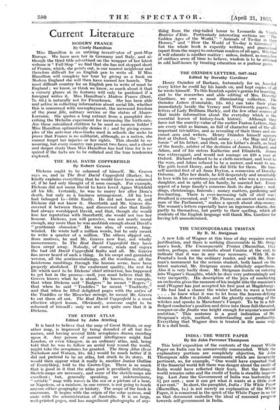 Miss Hamilton is an untiring investi7ator of post-War Europe. We have seen her in Germany and Italy, and al- though the third title advertised on the wrapper of her latest volume is " Full Stop " we find that she has not stopped short of France, which, she points out, is our nearest neighbour and therefore difficult for an English pen to write of. If Miss Hamilton will complete her tour by giving us a- book on Modern England she will then have earned her laurels. The most difficult country for an English pen to write of must be England ; we know, or think we know, so much about it that a cursory glance at its features will only be pardoned if a foreigner writes it. Miss Hamilton's Modern France (Dent, 7s. 6d.) is naturally not for Frenchmen. She has been able and active in collecting information about social life, whether this is concerned with unemployment, the increased freedom- of the jeune fine, military service or the status of Alsace- Lorraine. She quotes a long extract from a pamphlet des- cribing the Michelin experiment for increasing the birth-rate. Are these subsidized children to be used as cannon fodder ? Miss Hamilton optimistically denies it ; and by giving exam- ples of the anti-war class-books used in schools she seeks to prove that France is no militarist, although, -as a nation, she cannot forget her injuries or her rights. This should be re- assuring, but every country can present two faces, and a closer and deeper study than Miss Hamilton has had time for is re- quired if the facts are to be collated and the true tendencies explored.