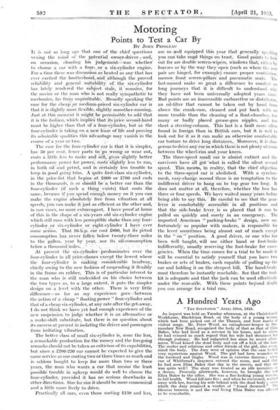 Points to Test a Car By

The case for the four-cylinder car is that it is simpler, has 50 per cent. fewer parts to go wrong or wear out, costs a little leSs to make and Sell:gives- slightly better performance power for power, eostiailightlY less to run, M both oil and Petrol, and is -Certainly less trouble to keep in good going trim. A quite first-class six7cylMder, in the priCe-list that begins at £600 or £700 and ends in the thousands,. is such shOuld be a. better car than the four-cylinder (if such a thing exists) . that costs the same, because if you_spend enough money on it you can make the engine absolutely- free from vibration at all speeds, you can make it_ justas efficient as the other and, in rare eases, no more extravagant. I have proof at home of this in the shape of a six-years old six-cylinder engine which still runs with less perceptible shake than any four; cylinder or six-eylinder. or: eightcylinder I have.. ever come across. - That 16-1i.p: car cost 28b0,- but-its -Petrol consuinption_ has never fallen below twentythree Miles to the„ gallon, year by year, nor its.. oil-consumption below a thousand At present the six-Cylinder: predominates over the four-cylinder in all price7classes except the lowest where the four-cylinder is making considerable headway, chiefly owing to the new fashion of suspending it flexibly. in the frame on rubber. This is of particular interest to the man who is. still undecided on his choice between the two types as, 'to a large extent, it puts the simpler design on a level with the other, There is very little difference-7-so far as my experience goes—between the action of a cheap " floating power " four-cylinder and that of a cheap six-cylinder, at any rate after the get-away. I do not think we have yet had enough experience of the new suspension to judge 'whether it is an alternative or a make-shift substitute, but there is no question about its success at present in isolating the driver and passengers from irritating vibration. .

The better class of small six-cylinder is, none the lesS, a remarkable production for the money and the foregoing remarks should not be taken as criticism of its capabilities, but since a £200-250 car cannot be expected to give the same service as one costing two or three times as much and is seldom bought to keep for more than two or three years, the man Who wants :a. car. that means the least possible" trouble in upkeep would do well to choose the four-cylinder, provided it has no serious drawbacks in other directions. Size for size it should be more economical and a little more lively to drive.

Practically all cars, even those costing £150 and less, are go equipped this year that' generally speaking you can take infOt things on trust: Good points to look out for are double screen-wipers, windows that, either by louvres or by the way they open (such as where the rear pair are hinged, for example) ensure proper ventilation, narrow front screen-pillars. and pneumatic seats. The last-named Make so great a difference to comfort on long journeys that it is difficult to understand why they have not been universally adopted years since. Bad points are an inaccessible carburettor 'or.distributor, an oil-filter that cannot be taken out by. hand from above the crank-case, cleaned and put back with no more trouble than the cleaning of a float-chamber, too many or badly placed grease-gun nipples, and too short a steering-column. This last is a fault more often found in foreign than in British cars, but it is well to look out .for- it as it can ma'Ve. an otherwise comfortable car torture to drive long distanceS,.;. Moreover, it is dan- gerous to'driVe any car in which there is not plenty of room between the Wheel;rim and your knees.

The three-speed small ear is aka-0st extinct and the survivors have all got -'what is called the silent second speed. This_ means, M. reality; that the chief objection to the three-speed car is -:abolished.-- With a synchro- mesh; easy-change second there is no temptation to the indifferent driver to-hang leaf to top gear too long. It does- not matter at 'all, therefo re, whether the box has three or four speeds. We have waited many'years before being able to say-:thiS.: Be careful to see that the gear- ' leirer is comfortahlY accessible- in all positions and that the side-brake_ lever is so placed that it can be pulled on quickly and . surely in an emergency. The imported --American 4-` parking-brake " design, now an- ' fortunately so popular with makers, is responsible for the lever- sometimes being almost out of reach except in the "'on" position. A good driver, or one who has been Well -taught, will use either hand or foot-brake indifferently, usually reserving the foot-brake for emer- i gencies. When the time comes for a trial to be made it will be essential to satisfy yourself that you have two brakes or sets of brakes; each capable of pulling up the car and holding it on the steepest hill. The hand-brake must therefore be instantly reachable. See that the tool- kit is adequate and that the jack can-be used effectively under the rear-agle. With these points beyond doubt you can arrange for a trial rtin: