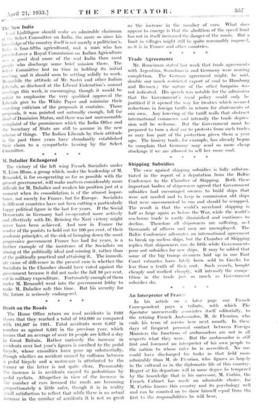 An Interpreter of France In his article on a later

page our French Correspondent pays at tribute, with which Thr Spectator unreservedly associates itself editorially, to the retiring French Ambassador, M. de Fleuriau, who ends his term of service here next month. In these days of frequent personal contact between Foreign Ministers the functions of ambassadors are not in all respects what they were. But the ambassador is still first and foremost an interpreter of his own people to the nation to whose ruler he is accredited. No one could have discharged his tasks in that field more admirably than M. de Fleuriau, who figures as largely in the cultural as in the diplomatic life of this country. Regret at his departure will in some degree be tempered by the knowledge that in his successor, M. Corbin, the French Cabinet has made an admirable choice, for M. Corbin knows this country and its psychology well and can be counted on to show himself equal from the first to the responsibilities he will bear.