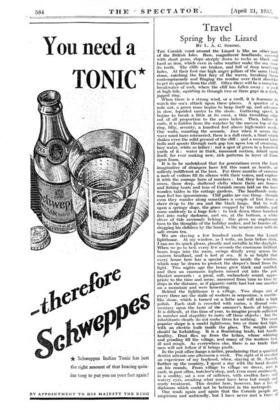 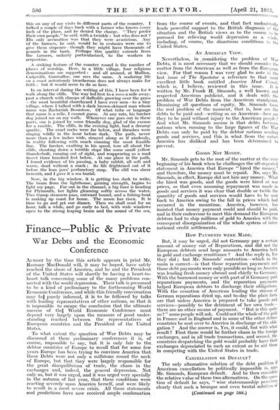 Spring by the Lizard

Tim Cornish coast around the Lizard is like no other part of the British Isles. Bare, magnificent headlands, covered with short grass, slope steeply down to rocks as black and hard as iron, which even in calm weather make the sea show its teeth. The cliffs are broken, and full of deep terrifying holes. At their foot rise high angry pillars of the same black stone, catching the first fury of the waves, breaking them contemptuously and flinging the residue over their shoulder to get its quietus from the cliff. Often there will be a complete breakwater of rock, where the cliff has fallen away : a pool at high tide, squirting in through two or three gaps in a dark, jagged ring.

When there is a strong wind, or a swell, it is fearsome to watch the sea's attack- upon these-places. A quarter of a mile out, a green mass begins to heap itself up, and advance in slow, lopsided canter to the shore. Gathering speed, it begins to break a little at its crest, a thin trembling edge out of all proportion to the acres below. Then, before it curls, it is hidden from the watcher by the uneven top of the ring, fifty, seventy, a hundred feet above' high-water mark. One waits, counting the seconds; Just when it seems the wave must have miscarried, there is a dull crash, a thud which shakes even the solid ground of the cliff : and a moment later boils and spouts through each gap ton upon ton of creaming, lacy water, white as lather : not a spot of green in a hundred yards of it : water in thick, incessant motion, inlaid upon itself, for ever making new, rich patterns in layer of foam upon foam. It is to be understood that for generationS even the least imaginative of strangers have felt this coast as hostile, or sullenly indifferent at the best. For three months of summer a mob of visitors fill its silence with their voices, and explore it with the courage born of numbers : but they keep to the coves, those deep, sheltered clefts where there are houses and fishing boats and teas of Cornish cream laid- on the bare wooden tables in the cottage gardens. The headlands make man feel too ignominious. Cliff paths are one, thing—though even they wander along sometimes a couple of feet from a sheer drop to the sea and the black fangs. But to walk upon a springy slope, the grass cropped by the rabbits, and conic suddenly to a huge hole : to look down three hundred feet into rocky darkness, and see, at the bottom, a white sliver of tide enviously licking : this gives 'an unpleasant turn to the thoughts-of the holiday maker, and he hurries off, dragging his children by the hand, to the nearest cove with its safe cream tea.

We are staying a few hundred yards from the Lizard lighthouse. At my window, as I write, an hoUr b-efore dusk, I can see its quick gleam, ghostly and metallic-in the daylight. When we go to bed, every few seconds the enormous brilliant beam leaps into the room, swings dizzily away across- the eastern headland, and is lost at sea. It is so bright that every house here has a special curtain inside the window, which may be drawn to protect the sleeper's head from the light. Two nights ago the beam grew thick and muffled, and then an enormous foghorn mooed out into the pale blanket seawards : a great, soft, melancholy sound, appro- priate to the time and scene, answered from time to time by ships in the distance, -as if gigantic cattle had lost one another on a mountain and were lamenting. Behind the lighthouse is a village. Two shops out of every- three are the stalls of--workers in serpentine, a marble- like stone, which is turned on a lathe and will take a high polish. Each stall is crowded with curios, a dismal com- mentary upon the taste of the summer's horde of trippers. It is difficult, at this time of year, to imagine people sufficient in number and stupidity to carry off these objects : but the inhabitants clearly do not make them for nothing. The most popular shape is a model lighthouse, two or three feet high, with an electric bulb inside the glass. The weight alone should be forbidding,. It is a flourishing trade, but hardly healthy. Dust flies up from the lathes, whose whirring and grinding fill the village, and many of the workers look ill and cough. As everywhere else, there is no trade that men will not follow if It brings profit. In the pOdt office hangs RAO rice, proclaiming that a qualified dentist attends one afternoon a week. The sight of it recalled an experience of my boyhood, when, staying at St. Austell, further up the country,- I'Spent a day with the local dentist on his rounds. From village to village we drove, and in each, in post office, butcher's shop, and, even more ominously, in a smithy, sat a row of sufferers, with swollen faces and watery eyes, awaiting what must have been but rough and ready treatment. This dentist here, however, has a list of diplomas which could not be bettered in the metropolis.

One reads again and again that the Cornish people are suspicious and unfriendly, but I have never met a trace of this on any of my visits in different parts of the country. I talked a couple of days back with a farmer who knows every inch of the place, and he denied the charge. " They prefer their own people," he said, with a twinkle : but who does not ? His only accusation was that they were avaricious. Any Of the farmers, he said, would be in ecstasies were one to give them sixpence—though they might have thousands of pounds in the bank. Perhaps this quality extends from the farmers, unfairly particularized, to the workers in serpentine.

A striking feature of the country round is the number of places of worship. Here, in a little village, four religious denominations are supported : and all around, at Mullion, Cadgwith, Gunwalloe, one sees the same. A seafaring life on a coast notoriously treacherous does not always make for faith : but it would seem to do so here.

In an interval during the writing of this, I have been for a walk along the cliffs. The way led first to a cove a mile away, past a church with clumps of daffodils growing over the grass —the most beautiful churchyard I have ever seen—to a tiny village, where I talked with a dark brown-skinned man whose name was Zachariah Bosustow. Of what tribe or language that name is a relic, I cannot guess. At any rate, his lurcher dog joined me on my walk. Whenever one goes out in these parts, one is joined by some friendly dog, glad of the excuse for a ramble. The cliffs, in the evening light, had a dreamy quality. The cruel rocks were far below, and thrushes were singing wildly in the hour before dark.- The path, never More than a few inches wide, strayed along as if aimlessly, in reality following with much cunning the most feasible line. The lurcher, exulting in his speed, tore all about the cliffs, shooting down a terrible slope like some small yellow thunderbolt, running out of sight, and reappearing as a mad insect three hundred feet below. At one place in the path, I found evidence of his passing, a baby rabbit, all soft and warm, dead without a mark ; its life frightened out of it before the lean jaws' perfunctory snap. - The cliff was sheer beneath, and I gave it a sea burial.

Now, in the big window, it is getting too dark to write. The beam from the lighthouse, gaining strength, begins to light my page. Far out in the channel, a big liner is heading for Plymouth, her lights gleaming softly across the water. Two tramp steamers pass, outward bound, and a fishing-boat is making up coast for home. The moon has risen. It is time to ..go and get our dinner. Then we shall read for an hour, talk a while, and go early to bed, with wide windows open to the strong leaping beam and the sound of the sea,