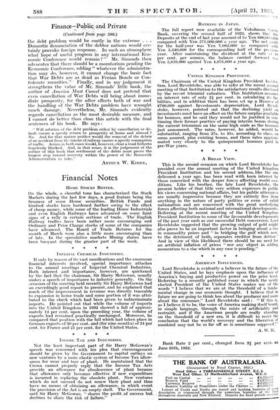 This is the second occasion on which Lord Revelstoke has presided over the annual meeting of the United Kingdom Provident Institution and his second address, like the one delivered a year ago, has been read with keen interest by those concerned with the deeper forces affecting world con- ditions. Like his brother, the late Lord Revelstoke, the present holder of that title very seldom expresses in public his views concerning national affairs, but his public utterances are usually impressive because they are entirely free from anything in the nature of party politics or even of rabid nationalism and are concerned with the great underlying forces affecting both national and international developments. Referring at the recent meeting of the United Kingdom Provident Institution to some of the favourable developments of the past year such as our successful Debt conversion, Lord Revelstoke suggested that the growing output of gold might also prove to be an important factor in bringing about a rise in commodity prices and " in bridging the gulf which now, to the detriment of both, separates creditor from debtor." And in view of this likelihood there should be no need for an artificial inflation of prices " nor any object in adding momentum to a rise which in any case is pending."