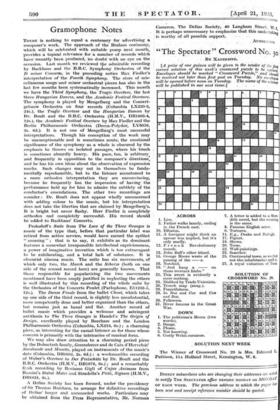 THERE is nothing to equal a centenary • for advertising is composer's work._ The approach of the Brithnis ceremony, which will be celebrated with suitable pomp next month, provides a topical relevance for a number of records :which have-recently- been produced, •no doubt-with an eye on the occasion. Last month we reviewed the admirable recording by Backhaus and the B.B.C. Symphony ,Orchestra of the D minor Concerto, in the preceding notice Max Fiedler's interpretation of the Fourth Symphony. The store of mis- cellaneous- songs-and minor orchestral pieces .has also in the last few months been systematically increased. This month we have the Third Symphony, the Tragic Overture, the last three Hungarian Dances, and the Acadernie Festival Overture. The symphony is played by Mengelberg and the Coneert- gebuow Orchestra on four records (Columbia LX220-3, 24s.), the Tradic Overture and the Hungarian Dances by Dr.- Boult and-the B.B.C. -Orchestra (H.M.V., DB1803-4, 128.), the Academic Festival Overture by Max Fiedler and the Berlin Philharmonic Orchestra (Decca-Polkdoi, LY6058; 3s. 6d.). It is not one of Mengelberg's most successful interpretations. Though his conception of the work may be unexceptionable and is sometimes acute, the emotional significance of the symphony as a whole is obscured by the emphasis he throws on isolated passages, where his tduch is sometimes absurdly heavy. His pace, too, is 'arbitrary, and frequently in opposition to the- composer's directions, and he has his own ideas about the observation of expression marks. Such changes may not in themselves be funda- mentally reprehensible, but to the listener accustomed to a more orthodox interpretation they are unconvincing, because he frequently has the impression of having - the .performance held _ up for him to admire the subtlety of the conductor's emendations. The other two recordings are sounder : Dr. Bonk does not appear wholly unconcerned with adding colour to the music, but his interpretation does not take the liberties that are claimed by Mengelberg's. It is bright but never flashy. Herr Fiedler is completely orthodox and completely successful. His record should be added to Backhaus' Concerto.

Prokofieff's Suite from The Love of the Three Oranges is music of the type that, before that particular label was retired from active service; would have earned the epithet " amusing " ; that is to say, it exhibits- as -its dominant- features a somewhat irresponsible intellectual capriciousness, a power of imaginative invention which is too extravagant to be exhilarating, and a total lack of substance. It is obscurist cinema music. The suite has six movements, of which only two, the March and the Scherzo (both on one side of the second record here) aro:generally known. That those responsible for popularizing the two movements mentioned have been amply justified in neglecting the others is well illustrated by this recording of the whole suite by the Orchestra of the Concerts Poulet (Parlophone, E11233-5, 12s.). The Haase Finale from the ballet Chout, which takes up one side of the third record, is slightly less unsubstantial, more competently done and better organized than the others, but remains just as banal and flat. Another record of ballet music which provides a welcome and astringent antithesis to The Three Oranges is Handel's The Origin of Design, excellently played by Beecham and the London Philharmonic Orchestra (Columbia, LX224, 6s.) ; a charming piece, as interesting for the casual listener as .for -those whose concern is primarily with the intricacies of musical form.

We may also draw attention to a charming period piece by the Dolmetsch family, Greenske-ves and de Caix d'Hervelois' Sarabande and Musette, played on instruments of the music's date (Columbia, DB1062, 2s. 6d.) : a workmanlike recording of Weber's Overture to Der Freischfaz by Dr. Boult and the B.B.C. Orchestra (H.M.V., DB1678, Os.) ; and a remarkably fresh recording by Beniamo Gigli of Cujus Animam from Rossini's Stabat Mater and Stradella's Pieta, Signore (H.M.V., DB1831, 6s.).

A Delius Society has been formed, under the presidency of Sir Thomas Beecham, to arrange for definitive recordings of Delius' longer and unrecorded works. Particulars may be obtained from the Treas. Representative, Mr. Norman Cameron, The Delius Society, 40 Langham Street, vv.1. It is perhaps unnecessary to emphasize that this undertaking is worthy of all possible support.