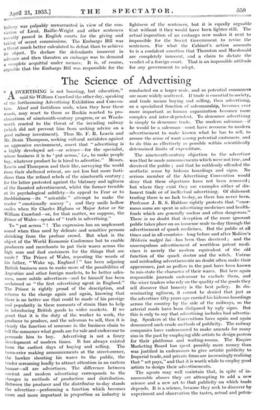 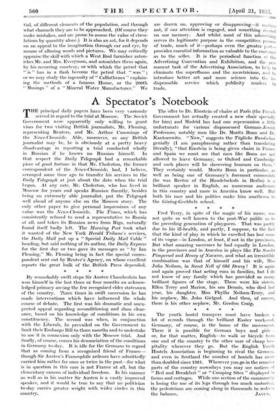 The Science of Advertising

ADVERTISING is not boosting, but education," said Sir William Crawford the other day, speaking of the forthcoming Advertising- Exhibition and Conven- tion. Aloof and fastidious souls, when they hear these words, may react to them as Ruskin reacted to pro- clamations of nineteenth-century progress, or as Words- worth reacted to the threat of the invading railway (which did not prevent him from seeking advice on a good railway investment). Thus Mr. F. R. Leavis and Mr. Denis Thompson, seeking cultural antidotes against an aggressive environment, assert that " advertising is a highly developed art—or science—for the specialist, .whose business it is to put across,' i.e., to make people buy, whatever product he is hired to advertise." Messrs. Leavis and Thompson and their like, surveying the world from their sheltered retreat, are not less but more fasti- dious than the refined rebels of the nineteenth century ; for the latter protested against the blatancy and ugliness of the flaunted advertisement, whilst the former tremble at its psychological subtlety—its appeal to Fear or to Snobbishness—its " scientific " attempt to make the reader " emotionally uneasy " ; and they smile hollow smiles when Sir Charles -Higham or Major Astor or Sir William Crawford—or, for that matter, we suppose, the Prince of Wales—speaks of " truth in advertising."

To " put across " ! The expression has an unpleasant sound when thus used by delicate and sensitive persons shrinking from the profane crowd. But what is the object of the World Economic Conference but to enable producers and merchants to put their wares across the high seas and find customers for the things that arc made ? The Prince of Wales, repeating the words of his father, " Wake up, England ! " has been adjuring British business men to make more of the possibilities of Argentine and other foreign markets, to be better sales- men, more subtle advertisers—and he himself has been acclaimed as " the first advertising' agent in England." The Prince is rightly proud of the description, and returns to the charge again and again, knowing that there is no better use that could be made of his prestige and popularity in these moments of strain than to help in introducing British goods to wider markets. If we grant that it is the duty of the worker to work, the producer to produce, and the salesman to sell, then it is clearly the function of someone in the business chain to tell the consumer what goods are for sale and endeavour to persuade him to buy. Advertising is not a fancy development of modern times. It has always existed from the earliest days of buying and selling. The town-crier making announcements at the street-corner, the hawker shouting his wares to the public, the trader screaming loudly to attract attention in an eastern bazaar—all are advertisers. The difference between ancient and modern advertising corresponds to the changes in- methods of production and distribution. Between the producer and the distributor to-day stands the advertiser—performing a function which becomes More and more important in proportion as industry is conducted on a larger scale, and as potential consumers are more widely scattered. If trade is essential to society, and trade. means buying and selling, then advertising, -as a specialized function of salesmanship, becomes ever more important as human organization becomes more complex and inter-dependent. To denounce advertising is simply to denounce trade. The modern salesman—if he would be a salesman—must have recourse to modern -advertisement to make known what he has to sell, to arouse the sense of want among-potential customers, and -to do this as effectively as possible within scientifically -determined limits of expenditure.

The nineteenth-century objection to the advertiser was that he made announcements which were not true, and -deceived the public ; and that he ruthlessly offended the aesthetic sense by hideous hoardings and signs. No serious member of the Advertising Convention would deny that these objections have not been removed ; but where they exist they are examples either of dis- honest trade or of ineffectual advertising. Of dishonest trading there is no lack to-day, as there has never been.

There is no doubt that deception of the more ignorant -public takes place on an immense scale to-day through the .advertisement of quack medicines. But the public at all times and in all countries—long before and after Moliere's Medecin malgre lui—has been • thus deceived ; and the unscrupulous advertisement of worthless patent medi- cines is merely the modern equivalent of the old function of the quack doctor and the witch. Untrue and misleading advertisements no doubt often make their appearance, just as pedlars in the past have been known to mis-state the character of their wares. But here again responsible journals endeavour to exclude them, and the wiser traders who rely on the quality of the goods they sell discover that honesty is the best policy. In dis- seminating ugliness, it cannot be denied that just as the advertiser fifty years ago carried his hideous hoardings across the country by the side of the railways, so the arterial roads have been disfigured by ugly signs. But this is only to say that advertising includes bad advertis- ing. Speakers at the Conventions have again and again denounced such crude methods of publicity. The railway companies have endeavoured to make amends for many sins in the past by employing able artists to design posters for their platforms and waiting-rooms. The Empire Marketing Board has spent possibly more money than was justified in endeavours to give artistic publicity to Imperial trade, and private firms are increasingly realizing that" art pays," and that it is worth while to employ good artists to design their advertisements.

The agents may well maintain that, in spite of in- -numerable abuses they are attempting to add a new science and a new art to that publicity on which trade depends. It is a science, because they seek to discover by experiment and observation the tastes, actual and poten- tial, of different elements of the population, and through what channels they are to be approached. (Of course they make mistakes, and are prone to assess the value of circu- lations by quantity alone.) It is also an art, for it dependS on an appeal to the imagination through ear and eye, by means of alluring words and pictures,- We may critically appraise the skill with which a West End furnisher asten‘ ishes Mr. and Mrs. Everyman, and astonishes them again, by his recurring courtesy,. or with which the petrol that " is " has in a flash become the petrol that " was " ; or we may study the ingenuity of " Callisthenes " explain- ing the methods of a famous House, or the 200th ." Musings " of a Mineral Water :Manufacturer." We are drawn -on, approving or disapproving7---it matters not, if our attention is engaged, and something riveted on our memory. And whilst most of this advertising serves its legitimate purpose in the competitive process of trade, much of it—perhaps even the greater part— provides essential information as valuable to the customer as to the seller. It is the periodical - function of the Advertising Convention and Exhibition, and- the per- manent task of the Advertising Association, to- help to eliminate the superfluous and the meretricious, and to introduce better art and more science into the in- dispensable service which publicity renders to trade.