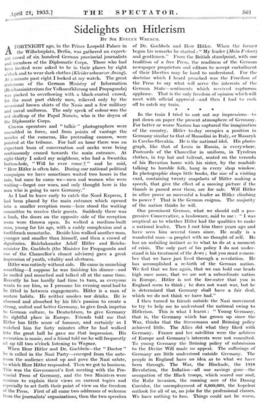 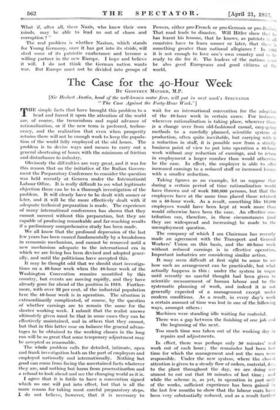 BY SIR EVELYN WRENCIL A. FORTNIGHT ago, in the Prince Leopold Palace in the Wilhelmplatz, Berlin, was gathered an expect- ant crowd of six hundred German provincial journalists and members of the Diplomatic Corps. Those who had been invited were asked to be in their places by eight o'clock and to wear dark clothes (Kleider schwarzer Anzug). At a minute past eight I looked at my watch. The great stateroom of the German Ministry of Information (Reichsministerium fur Volksaufklarung and Propaganda) was packed to overflowing with a black-coated crowd, for the most part elderly men, relieved_ only by the occasional brown shirts of the Nazis and a few military and naval. uniforms. The only speck of colour was the red skullcap of the Papal Nuncio, who is the doyen of the Diplomatic Corps.

Cinema operators and " talkie " photographers were assembled in force, and from points of vantage the nozzles of the cameras, like protruding cannon, were pointed at the tribune. For half an hour there was an expectant buzz of conversation and necks were being continuously craned towards the main entrance. At eight-thirty I asked my neighbour, who had a Swastika button-hole, " Will he ever come " and he said, " Herr Hitler is often late. During our national political campaigns we have sometimes waited two hours in the rain, but once he came we—men and women who were waiting—forgot our woes, and only thought here is the man who is going to save Germany."

As I had to leave early to catch the Nord Express, I had been placed by the main entrance which opened into a smaller reception room—here stood the waiting committee to receive their guests. Suddenly there was a hush, the doors on the opposite side of the reception room were thrown open. In walked a medium-built man, young for his age, with a ruddy complexion and a toothbrush moustache. Beside him walked another man, younger and smaller than himself, and then a crowd of dignitaries. Reichskanzler Adolf Hitler and Reichs- minister Dr. Goebbels (the Minister for Propaganda and one of the Chancellor's closest advisers) gave a great impression of youth, vitality and alertness. Hitler was entirely without side. He came in munching something—I suppose he was finishing his dinner—and lie smiled and munched and talked all at the same time. Recently he has hardly had time to turn, as everyone wants to see him, so I presume his evening meal had to be fitted in- between engagements. Hitler is a man of austere habits. He neither smokes nor drinks. He is obsessed and absorbed by his life's passion to create a strong, united and better Germany, to give fresh impetus to German culture,' to Deutschtum, to give Germany its rightful place in Europe. Friends told me that Hitler has little sense 'of humour, and certainly as I watched him for forty minutes after he had walked into the great hall he gave me that impression. His recreation is music, and a friend told me he will frequently sit up till two o'clock listening to Wagner.

When Herr Hitler and Dr. Goebbels—the " Doctor " he is called in the Nazi Party—emerged from the ante- room the audience stood up and gave the Nazi salute, to which Herr Hitler responded. Then we got to business. This was the Government's first meeting with the Pro- vincial Press of Germany, and the two Ministers were anxious to explain their views on current topics and especially to set forth their point of view on the freedom of the Press. • 'First of all came two addresses of welcome from the journalists' organizations, then the two speeches of Dr. Goebbels and Herr Hitler. When the former began his remarks he started : " My leader (Mein F iihrer) and gentlemen." From the British standpoint, with our tradition of a free Press, the readiness of the German newspaper proprietors and editors to accept curtailment of their liberties may be hard to understand. For the doctrine which I heard preached was the Freedom of the Press to say what will serve the interests of the German State—sentiments which received rapturous applause. That is the only freedom of opinion which will meet, with official approval—and then I had to rush off to catch my train.

In the train I tried to sort out my impressions—to put down on paper the present atmosphere of Germany, For better or worse Nazism has captured the imagination of the country. Hitler to-day occupies a position in Germany similar to that of Mussolini in Italy, or Masaryk in Czecho-Slovakia. He is the national idol. His photo- graph, like that of Lenin in Russia, is everywhere. Postcards of the Chancellor in uniform, in Tyrolean clothes, in top hat and tailcoat, seated on the veranda of his Bavarian home with his sister, by the roadside talking to humble folk, hang in every shop window. In photographic shops little books, the size of a visiting card, containing twenty snapshots of Hitler making a speech, that give the effect of a moving picture if the thumb is passed over them, are for sale. Will Hitler in office .prove as successful a leader as Hitler climbing to power ? That is the German enigma. The majority of the nation thinks he will.

One prominent German, what we should call a pro- gressive Conservative, a landowner, said to me : " I was sceptical as to whether Hitler had the qualities to make a national leader. Then I met him three years ago and have seen him several times since. He really is a wonderful man—a prophet with no thought of self. He has an unfailing instinct as to what to do at a moment of crisis. The only part of his policy I do not under., stand is his treatment of the Jews ; but you must remem- ber that we have just lived through a revolution. He has accomplished a re-birth of the German nation. We feel that we live again, that we can hold our heads high once more, that we are not a subordinate nation in Europe. Hitler is not the fire-eater that you in England seem to think ; he does not want war, but he is determined that Germany shall have a fair deal, which we .do not think we have had."

I then turned to friends outside the Nazi movement to try to help me to understand the national swing to Hitlerism. This is what I learnt : " Young Germany, that is, the Germany which has grown up since the War, thinks that the Stresenuum and Bruning policy achieved little. The Allies did what they liked with Germany. France and her satellites were the arbiters of Europe and Germany's interests were not consulted. To young Germany the Bruning policy of submission to the Divine"Will made no appeal. The sufferings of Germany are little understood outside Germany. The people in England have no idea as to what we have been through. The War, the Blockade, the 1918 Revolution, the Inflation—all our savings gone—the occupation of the Black troops, which seared our soul, the Ruhr invasion, the running sore of the Danzig Corridor, the unemployment of 6,000,000, the hopeless outlook for all of us, no jobs for the professional classes; We have nothing to lose. Things could not be worse. What if, after all, these Nazis, who knew their 'own minds, may be able to lead us out of chaos and corruption ? "

The real problem is whether Nazism, which stands for Young Germany, once it has got into its stride, wilt shed some of its patriotic exuberance and become a willing partner in the new Europe. I hope and believe it will. I do not think the German nation wants war. But Europe must not be divided into groups of Powers, either pro-French or pro-German. or pro-Italian. That road leads to disaster. Will Hitler show that he has learnt his lessons, that he knows, as patriots in all countries have to learn sooner or later, that there is something greater than national allegiance ? In 1933 it is not enough to love one's own country and to he ready to die for it. The leaders of the nations must be also good Europeans and good citizens of the world.