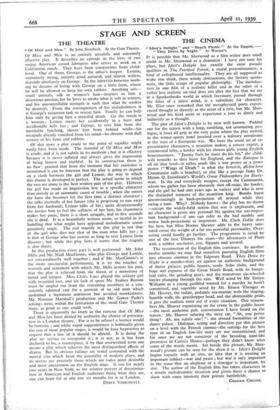 IT is possible that Mr. Sherwood as a film writer does small credit to Mr. Sherwood as a dramatist : I have not seen his plays, but Idiot's Delight has exactly the same pseudo qualities as The Petrified Forest, a moral pretentiousness, a kind of cellophaned intellectuality. They are all supposed to make one think, these windy abstractions, the literary quota- tions, the little scraps of popular philosophy. The intraduc- tion in one film of a realistic killer and in the other of a rather less realistic air-raid does not alter the fact that we are in a Sparkenbroke world in which literature, passed through the filter of a naïve mind, is a substitute for character. Mr. Eliot once remarked that the metaphysical poets experi- enced thought as directly as the scent of a rose, but Mr. Sher- wood and his kind seem to experience a rose as dimly and indirectly as a thought.

The plot of Idiot's Delight is by now well known. Padded out for the screen with a long, rambling, not unamusing pro- logue, it loses all grip at the very point where the play started, in the winter-sports hotel perched over a military aerodrome at the start of a European war. We have the usual set of re- presentative characters, a munition maker, a cancer expert, a sentimental lefty, a hoofer with his chorus girls, young English honeymooners. "Jimmy feels he must do his bit," the child- wife remarks as they leave for England, and the dialogue is all on that level—it eithei reads like a war poster or a peace poster (" Wings of Death" is what the feverish, all-for-love Communist calls a bomber), or else like a passage from Dr. Hiram Q. Entwhistle's World's Great Philosophers for Every- man. In the end everybody escapes, except the Communist, whom we gather has been obscurely shot off-stage, the hoofer, and the girl he had met years ago in variety and who is now the discarded mistress of the munition king. Bombs burst unconvincingly in back-projection all around while they swing a tune. Why? Nobody knows : the play has no theme —except the widely-held notion that war is unpleasant, and no character is given any personal life against the too-impor- tant background—if one can refer to the bad models and worse back-projections as important. Mr. Clark Gable does his best, but Miss Norma Shearer adds to the heavy satu- rated ennui the weight of a far too powerful personality. Over- acting could hardly go further. The programme is saved by one of the best Disneys for years—the adventures of Pluto with a rubber sea-horse, coy, flippant and aerated.

The resurrection of the English film continues. In another twelve months we may find ourselves pursuing English films

into obscure cinemas in the Edgware Road. They Drive by Night is a murder-story set against an authentic background of dance palaces, public houses, seedy Soho clubs, and the

huge wet expanse of the Great North Road, with its bunga- loid cafés, the grinding gears, and the monstrous six-wheeled lorries plunging through the rain. Well acted by Mr. Emlyn Williams as a young gaolbird wanted for a murder he hasn't committed, and superbly acted by Mr. Ernest Thesiger as Mr. Hoover, the sedate, pedantic sex-maniac with the sloping, humble walk, thc grasshopper head, and the abominable pride, it gets the realistic twist out of every situation. One remem- bers Mr. Hoover expatiating on the crime in the public house —the most authentic pub. conversation I have heard on the screen : Mr. Hoover saluting the stray cat, " Ah, you pretty thing! Ah, my subtle one! ": the absurd formalities of the dance palace. Dialogue, acting and direction put this picture on a level with the French cinema—the settings for the first time in an English low-life story are not romanticised, and for once we are not conscious of the brooding aunt-like presences in Carlis:e House—perhaps they didn't know what some of the words meant. Set beside this picture, Mr. Sher-

wood's picture can be seen for the sham it is. Idiot's Delight

begins vaguely with an idea, an idea that it is treating an important subject—war and peace ; but war is only important in the sense that an elephant or a dowager is important, by size. The author of the English film has taken characters in a simple melodramatic situation and given, them a chance to show with some intensity their private battlefields.