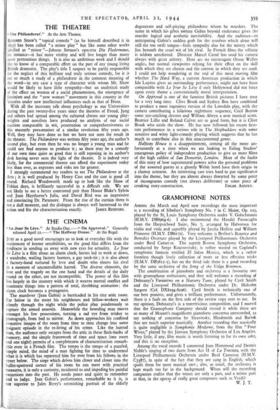 THE CINEMA " Le Jour Se Leve." At Studio One.

" On Approval." Generally released April 22.—" The Halfway House." At the Regal.

Jusr as a good novel encourages us to look at everyday life with the excitement of keener sensibilities, so the good film differs from the mediocre in sending us away with new eyes for actuality. Le Jour Se Leve is a film about an alarm clock, horses led to work at dawn, a wardrobe, wailing factory hooters, a gay neck-tie ; it is also about a factory-hand tortured by love and doubt who shoots his rival in a moment of uncontrollable hatred. The diverse elements, the love and the tragedy on the one hand and the details of the daily round on the other, are not incompatible. The power of this film lies largely in the mastery with which it weaves mental conflict and inanimate things into a pattern of total, throbbing animation: the alarm clock becomes a protagonist.

The murderer (Jean Gabin) is barricaded in his tiny attic room. Far below in the street his neighbours and fellow-workers wait silently through the night while the police plan ponderously to capture the armed assassin. Meanwhile the brooding man moves amongst his few possessions, turning a sad eye from trinket to photograph, from bed to mirror. As dawn approaches his confined evocative images of the room from time to time change into some poignant episode in the re-living of his crime. Like the hunted man, the audience only escapes from the attic in these flash-backs of memory, and the simple framework of time and space (one room and one night) permits of a completeness of characterisation remark- able even in a. French film. The tempo is the tempo of a puzzled, simple mind, the mind of a man fighting for time to understand what it is which has separated him for ever from his fellows in the street below. The siege which drives him closer and closer into the bullet-spattered corner of his room he can meet with practical measures, it is only a curiosity, incidental to and impeding his painful excursions into the past. He needs peace and quiet to remember and to judge. Jean Gabin's performance, remarkable as it is, is not superior to Jules Berry's astonishing portrait of the elderly

degenerate and self-pitying philanderer Whom he murders. The scene in which his gibes torture Gabin beyond endurance gives the murder logical and aesthetic inevitability. And the audience—in anticipating Gabin's sudden grab for the revolver which alone will still the too swift tongue—feels sympathy also for the misery which lies beneath the cruel wit of his rival. In French films the villainy is seldom unrelieved. Director Marcel Came has used his camera always with great artistry. Here are no extravagant Orson Welles angles, but normal viewpoints relying for their effect on the skill with which they are chosen and the context in which they are used. 1 could not help wondering at the end of this most moving film whether The Hard Way, a current American production in which Ida Lupino gives an outstanding performance, might not have been comparable with Le Jour Se Leve if only Hollywood did not force upon every theme a conventionally moral interpretation.

On Approval is one of the funniest British pictures I have seen for a very long time. Clive Brook and Sydney Box have combined to produce a most ingenious version of the Lonsdalc play, with the camera contributing a hilarious nightmare sequence, Cecil Beaton some eye-catching dresses and William Alwyn a neat musical score. Beatrice Lillie and Roland Culver are in good form, but it is Clive Brook who steals the show. He has now followed his recent first- rate performance in a serious role in The Shipbuilders with some sensitive and witty light-comedy playing which suggests that he has much to contribute also in this unaccustomed genre.

Halfway House is a disappointment, coming all the more un- fortunately at a time when we are looking to Ealing Studios' courageous policy of independent production to give us more films of the high calibre of San Demetrio, London. Most of the faults of this story of how supernatural powers solve the personal problems of the assorted guests at a ghostly Welsh hotel have their origin in a clumsy scenario. An interesting cast tries hard to put significance into the theme, but they are almost always thwarted by some piece of incongruous comedy (not always deliberate) or some piece of