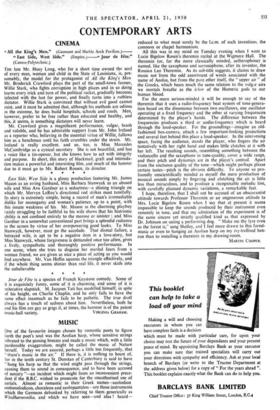 THE late Mr. Huey Long, who for a short time owned the soul of every man, woman and child in the State of Louisiana, is, pre- sumably, the model for the protagonist of All the King's Men Mr. Broderick Crawford plays the part of the small-town farmer, Willie Stark, who fights corruption in high places and in so doing learns every trick and turn of the political racket, gradually becomes infected with the lust for power, and finally turns into a ruthless dictator. Willie Stark Is convinced that without evil good cannot exist, and it must be admitted that, although his methods are odious in the extreme, he does build hospitals, schools and roads. Men, however, prefer to be free rather than educated and healthy, and this, it seems, is something dictators will never learn.

Mr. Crawford gives a magnificent performance, vulgar, brash and voluble, and he has admirable support from Mr. John Ireland as a reporter who, believing in the essential virtue of Willie, follows him as a henchman until his faith crumbles under the strain. Mr. Ireland is really excellent, and so, too, is Miss Mercedes McCambridge as a cynical secretary. She is not beautiful, and has a voice like a tin-opener, but she knows how to act with integrity and purpose. In short, this story of blackmail, graft and intimida- tion makes a powerful and interesting film, and much of the honour due to it must go to Mr. Robert Rossen, its director. * * * * East Side, West Side is a glossy production featuring Mr. James Mason as an erring husband, Miss Barbara Stanwyck as an abused wife and Miss Ava Gardner as a seductress—a shining triangle on which Mr. Mervyn LeRoy's directional rod strikes most tunefully. Its story is extremely simple, being a record of man's irremediable dislike for monogamy and woman's patience, up to a point, with this innate weakness of his. Mr. Mason as the charming playboy vainly struggling to be faithful to his wife shows that his histrionic ability is not confined entirely to the morose or sinister ; and Miss Gardner in a somewhat conventional part brings a splendid radiance to the screen by virtue of her overpowering good looks. To Miss Stanwyck, however, must go the accolade. That dismal failure, a betrayed wife, is apt to be a negative item in a love-story, but Miss Stanwyck, whose forgiveness is demanded once too often, gives a lively, sympathetic and thoroughly positive performance. In one scene, when she tries to disguise her marital fears from a woman friend, we are given as nice a piece of acting as you would find anywhere. Mr. Van Heflin squares the triangle effectively, and if the whole thing seems shinier than real life, it never skids• into the unbelievable.

* * * * Jour de Fite is a species of French Keystone comedy. Some of it is exquisitely funny, some of it is charming, and some of it is reiterative slapstick. M. Jacques Tati has modelled himself, in spite of his height, on Charlie Chaplin, and he only fails to have the same effect inasmuch as he fails to be pathetic. The true droll always has a touch of sadness about him. Nevertheless, both he and his film are gay as grigs if, at times, the humour is of the patent