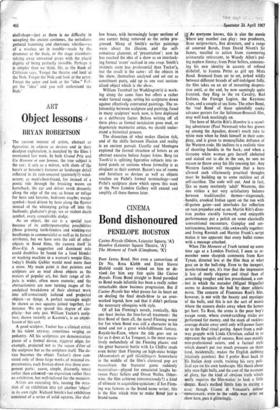 Poor James Bond. Not even a consortium of Dr No, Rosa Klebb and Ernst Stavro Blofeld could have wished on him or de- vised' for him any fate quite like Casino Royale. From Bond straight to Bond parodied to Bond made infantile has been a really rather remarkable show business progression. But if Casino Royale has what passes for its heart set on dealing the final death-blow to an over- worked legend, how sad that it didn't perform the necessary obsequies with style.

Of all Ian Fleming's novels, ironically, this one least invites the free-for-all treatment : the first Bond of them all, the novel Fleming wrote for fun when Bond was still a character in his mind and not a great wish-fulfilment fantasy. Royale-les-Eaux, where the tide goes out as far as it does at Le Touquet, is the most evoca- tively melancholy of the . Fleming places; and the great baccarat battle with Le Chiffre reads even better than Fleming on high-stake bridge (Moonraker) or golf (Goldfinger). Somewhere in the middle of the film's cluttered pop art mausoleum the baccarat game suddenly materialises—played for emaciated laughs be- tween Peter Sellers and Orson Welles. Other- wise, the film achieves (unconsciously?) a kind of ultimate in acquisitive cynicism: if Ian Flem- ing was famous as the brand name writer, this is the film which tries to mike-Bond just a brand name. a' As everyone knows, this is also the movie .fihere any number can play: two producers, three scriptwriters, five directors, and a range of assorted Bonds, from David Niven's Sir James, ' recalled to action from stammering aristocratic retirement, to Woody Allen's pul- ing nephew Jimmy; from Peter Sellers, announc- ing his new identity in accents of refined disbelief, to Joanna Pettet as girl spy Mata Bond. Bounced: from set to set, jerked wildly between different brands of self-indulgent folly, the film takes on an air of mounting despera- tion until, at the end, by now seemingly quite frenzied, they fling in the us Cavalry, Red Indians, the Foreign Legion, the Keystone Cops, and a couple of sea lions. The other Bond, the 'real Bond' of those splendidly cocky advance posters for the Saltzman-Broccoli film, may well look mockingly on.

The hero of Martin Ritt's Hombre is a scowl- ing adventurer (Paul Newman) who has grown up among the Apaches, doesn't much take to white men when he finds himself in their corn- eany, and is given to monosyllabic defiance of the Western code. He inclines to a realistic view of shooting bandits- in the back; and when a tiresome white woman gets herself abducted and staked out to. die in the sun, he sees no reason •to throw away his life rescuing her. Any Western fancier will recognise that a hero allowed such villainously practical thoughts must be building up to some reckless act of self-sacrifice. The code will out. And in fact,

Ike so many resolutely 'adult' Westerns, this • one strikes a not very satisfactory balance between traditionalist themes—stagecoach, bandits, crooked Indian agent on the run with All-gotten gains—and interludes for reflection on race prejudice and so on. Martin Ritt's direc- tion pushes sturdily forward, and enjoyable performances put a polish on some classically conventional encounters. Gunplay and sen- tentiousness, however, ride awkwardly together; and Irving Ravetch and Harriet Frank's script makes it too apparent that every bullet comes with a message attached.

When The Moment of Truth turned up some time ago at a London Festival, I seem to re- member some sharpish comments from Ken Tynan, directed less at the film than at what goes on in the bull-ring. Even to the inexpert, movie-trained eye, it's true that the impression is less of steely elegance and ritual than of something rougher and less preordained, a con- ,' test in which the matador (Miguel Miguelin) seems to dominate the bull by sheer athletic nerve. The concern of Francesco Rosi's film, however, is not with the beauty and mystique of the bulls, and this is not the sort of movie *here the camera ducks away when the horses get hurt. To Rosi, the arena is the poor boy's escape route, where crowd-catching tricks are .0erformed for money, and the stock of reckless courage drains away until only will-power faces up to the final ritual goring. Apart from a mid- way grapple with Linda Christian, called in to represent the spoils of success, Rosi uses mainly non-professional actors, and a factual style which doesn't put too much pressure on them (and, incidentally, makes the English dubbing relatively painless). But I prefer Rosi back in its Italian deep south, training his very poll- teal eye on his own landscape. His thesis about why men fight bulls, and the cost of the moment of glory, has the kind of obvious truth which *ally requires the film-maker to look a little deeper. Rosi's method limits him to stating a case; though Gianni di Venanzo's colour --camerawork, even in the oddly wan print on show here, puts it glitteringly.