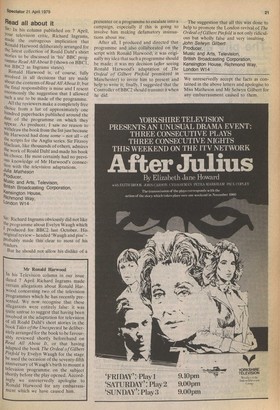 Read all about it

Sir: In his column published on 7 April, Your television critic, Richard Ingrams, made the outrageous implication that Ronald Harwood deliberately arranged for the latest collection of Roald Dahl's short stories to be discussed in 'his' BBC programme Read All About It (shown on BBC1 , riot BBC2 as Ingrams states). Ronald Harwood is, of course, fully Involved in all decisions that are made about the contents of Read All About It, but the final responsibility is mine and I resent enormously the suggestion that I allowed such a use to be made of the programme. All the reviewers make a completely free choice from a list of approximately one hundred paperbacks published around the date of the programme on which they aPPear. As producer, I saw no reason to Withdraw the book from the list just because Mr Harwood had done some — not all — of the scripts for the Anglia series. Sir Fitzroy Maclean, like thousands of others, admires the work of Roald Dahl and made his book his choice. He most certainly had no previ°.us knowledge of Mr Harwood's connection with the television adaptations. Julia Matheson Producer,

Sir: Richard Ingrams obviously did not like the programme about Evelyn Waugh which , produced for BBC2 last October. His original review — headed 'Waugh and piss' — Probably made this clear to most of his readers.

But he should not allow his dislike of a presenter or a programme to escalate into a campaign, especially if this is going to involve him making defamatory insinuations about me.

After all, I produced and directed that programme and also collaborated on the script with Ronald Harwood; it was originally my idea that such a programme should be made; it was my decision (after seeing Ronald Harwood's adaptation of The Ordeal of Gilbert Pinfold premiered in Manchester) to invite him to present and help to write it; finally, I suggested that the Controller of BBC2 should transmit it when he did. The suggestion that all this was done to help to promote the London revival of The Ordeal of Gilbert Pin fold is not only ridiculous but wholly false and very insulting. John Selwyn Gilbert Producer, Music an Arts, Television, British Broadcasting Corporation, Kensington House, Richmond Way, London W14 We unreservedly accept the facts as contained in the above letters and apologise to Miss Matheson and Mr Selwyn Gilbert for any embarrassment caused to them.