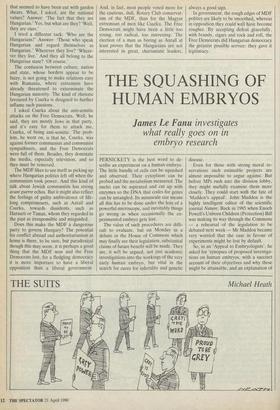 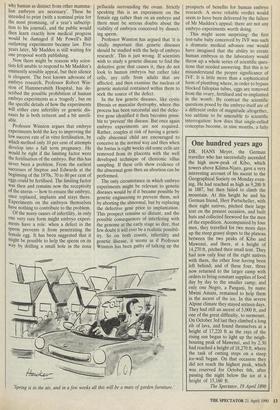 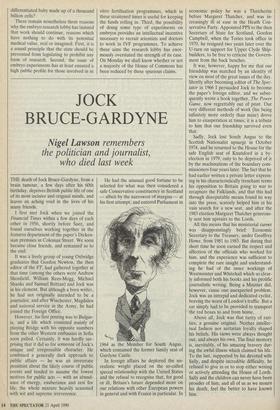 THE SQUASHING OF HUMAN EMBRYOS

what really goes on in embryo research

PERNICKETY is the best word to de- scribe an experiment on a human embryo. The little bundle of cells can be squashed and observed. Their cytoplasm can be probed and the metabolism measured. The nuclei can be aspirated and cut up with enzymes so the DNA that codes for genes can be untangled. Its minuscule size means all this has to be done under the lens of a powerful microscope, and inevitably things go wrong as when occasionally the ex- perimented embryo gets lost.

The value of such procedures are diffi- cult to evaluate, but on Monday in a debate in the House of Commons which may finally see their legislation, substantial claims of future benefit will be made. They are, it will be argued, not just academic investigations into the workings of the very early human embryo, but vital in the search for cures for infertility and genetic disease.

Even for those with strong moral re- servations such estimable projects are almost impossible to argue against. But before MPs rush into the division lobby, they might usefully examine them more closely. They could start with the fate of 'Maddox's appeal'. John Maddox is the highly intelligent editor of the scientific journal Nature. Back in 1985 when Enoch Powell's Unborn Children (Protection) Bill was making its way through the Commons — a rehearsal of the legislation to be debated next week — Mr Maddox became very worried that the case in favour of experiments might be lost by default.

So, in an 'Appeal to Embryologists', he asked for 'synopses of proposed investiga- tions on human embryos, with a succinct account of their objectives and why these might be attainable, and an explanation of why human as distinct from other mamma- lian embryos are necessary'. These he intended to print (with a nominal prize for the most promising, of a year's subscrip- tion to his journal), and the public would then learn exactly how medical progress would be damaged if Mr Powell's Bill outlawing experiments -became law. Five years later, Mr Maddox is still waiting for one proposal worth publishing.

Now there might be reasons why scien- tists felt unable to respond to Mr Maddox's eminently sensible appeal, but their silence is eloquent. The best known advocate of embryo research, Professor Robert Win- ston of Hammersmith Hospital, has de- scribed the possible prohibition of human embryo experiments as a 'tragedy', but on the specific details of how the experiments will either cure infertility or genetic dis- eases he is both reticent and a bit unreli- able.

Professor Winston argues that embryo experiments hold the key to improving the low success rate of in vitro fertilisation, by which method only 10 per cent of attempts develop into a full term pregnancy. He would be right if the limiting factor were the fertilisation of the embryo. But this has never been a problem. From the earliest successes of Steptoe and Edwards at the beginning of the 1970s, 70 to 80 per cent of eggs could be fertilised. The limiting factor was then and remains now the receptivity of the uterus — how to ensure the embryo, once replaced, implants and stays there. Experiments on the embryos themselves have nothing to contribute to the problem. Of the many causes of infertility, in only one very rare form might embryo experi- ments have a role: when a defect in the sperm prevents it from penetrating the female egg. It has been suggested that it Tight be possible to help the sperm on its way by drilling a small hole in the zona pellucida surrounding the ovum. Strictly speaking this is an experiment on the female egg rather than on an embryo and there must be serious doubts about the viability of embryos conceived by dissect- ing sperm.

Professor Winston has argued that 'it is vitally important that genetic diseases should be studied with the help of embryo research'. This is just wrong. If scientists wish to study a genetic disease to find the defective gene that causes it, they do not look to human embryos but rather take cells, any cells from adults that are affected, and then examine the nucleus of genetic material contained within them to seek the source of the defect.

In the few genetic diseases, like cystic fibrosis or muscular dystrophy, where this process has been successful and the defec- tive gene identified it then becomes possi- ble to 'prevent' the disease. But once again embryo experiments are not required. Rather, couples at risk of having a geneti- cally abnormal child are encouraged to conceive in the normal way and then when the foetus is eight weeks old some cells are removed from its placenta with the well developed technique of chorionic villus sampling. If these cells show evidence of the abnormal gene then an abortion can be performed. The only circumstance in which embryo experiments might be relevant to genetic diseases would be if it became possible by genetic engineering to prevent them, not by aborting the abnormal, but by replacing the defective gene prior to implantation. This prospect remains so distant, and the possible consequences of interfering with the genome at the early stage so dire, that few doubt it will ever be a realistic possibil- ity. So on both counts, infertility and genetic disease, it seems as if Professor Winston has been guilty of talking up the `Spring is in the air, and in a few weeks all this will be a mass of garden furniture.' prospects of benefits for human embryo research. A more reliable verdict would seem to have been delivered by the failure of Mr Maddox's appeal: there are not any embryo experiments worth doing.

This might seem surprising: the first test-tube baby conceived by IVF was such a dramatic medical advance one would have imagined that the ability to create human embryos in the laboratory would throw up a whole series of scientific ques- tions that needed answering. But this is to misunderstand the proper significance of IVF. It is little more than a sophisticated form of plumbing where, in order to bypass blocked fallopian tubes, eggs are removed from the ovary, fertilised and re-implanted in the womb. By contrast the scientific questions posed by the embryo itself are of a different order of magnitude altogether, too sublime to be amenable to scientific interrogation: how does that single-celled conceptus become, in nine months, a fully differentiated baby made up of a thousand billion cells?

There remain nonetheless three reasons why the embryo research lobby has insisted that work should continue, reasons which have nothing to do with its potential medical value, real or imagined. First, it is a sound principle that the state should be prevented from legislating to prohibit any form of research. Second, the issue of embryo experiments has at least ensured a high public profile for those involved in in vitro fertilisation programmes, which in these straitened times is useful for keeping the funds rolling in. Third, the possibility of doing some type of experiments on embryos provides an intellectual incentive necessary to recruit scientists and doctors to work in IVF programmes. To achieve these aims the research lobby has enor- mously overstated the strength of its case. On Monday we shall know whether or not a majority of the House of Commons has been reduced by these spurious claims.