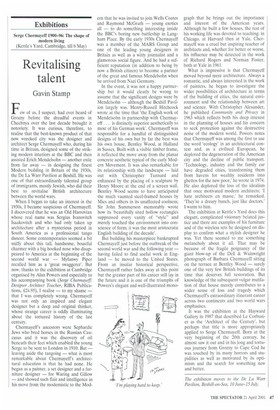 Serge Chermayeff 1900-96: The shape of modern living (Kettle's Yard, Cambridge. till 6 May)

Few of us, I suspect, had ever heard of Grozny before the dreadful events in Chechnya over the last decade brought it notoriety. It was curious, therefore, to realise that the best-known product of that now wrecked city was the designer and architect Serge Chermayeff who, during his time in Britain, designed some of the striking modern interiors at the BBC and then assisted Erich Mendelsohn — another exile from far away — in designing the finest Modern building in Britain of the 1930s, the De La Warr Pavilion at Bexhill. He was one of that extraordinarily talented group of immigrants, mostly Jewish, who did their best to revitalise British architecture between the world wars.

When I began to take an interest in the 1930s, I became suspicious of Chermayeff. I discovered that he was an Old Harrovian whose real name was Sergius Ivanovitch Isaakovitch and who had only taken up architecture after a mysterious period in South America as a professional tango dancer. Some contemporaries seemed a bit sniffy about this tall, handsome, boastful charmer with a big hooked nose who disappeared to America at the beginning of the second world war — Myfanwy Piper recalled him as a 'great swaggerer'. But now, thanks to the exhibition at Cambridge organised by Alan Powers and especially to his accompanying book (Serge Chermayeff: Designer Architect Teacher, RIBA Publications, f24.95), I realise — to my shame — that I was completely wrong. Chermayeff was not only an inspired and elegant designer but a deep and original thinker, whose strange career is oddly illuminating about the tortured history of the last century.

Chermayeffs ancestors were Sephardic Jews who bred horses in the Russian Caucasus and it was the discovery of oil beneath their feet which enabled the young Serge to be sent to London in 1910. But — leaving aside the tangoing — what is most remarkable about Chermayeffs architectural education is that he had none. He began as a painter, a set designer and a furniture designer — for Waring and Gillow — and showed such flair and intelligence in his move from the modernistic to the Mod

em that he was invited to join Wells Coates and Raymond McGrath — young exotics all — to do something interesting inside the BBC's boring new battleship in Langham Place. By the early 1930s Chermayeff was a member of the MARS Group and one of the leading young designers in Britain as well as a witty journalist and a glamorous social figure. And he had a sufficient reputation (in addition to being by now a British citizen) to become a partner of the great and famous Mendelsohn when he arrived from Nazi Germany.

In the event, it was not a happy partnership but it would clearly be wrong to assume that the significant designs were by Mendelsohn — although the Bexhill Pavilion largely was. Henry-Russell Hitchcock wrote at the time that 'the English work of Mendelsohn in partnership with Chermayeff. . . is distinctly superior aesthetically to most of his German work'. Chermayeff was responsible for a handful of distinguished designs of his own but by far the best was his own house. Bentley Wood, at Halland in Sussex. Built with a visible timber frame, it reflected the move away from the planar concrete aesthetic typical of the early Modern Movement. It was also remarkable for its relationship with the landscape — laid out with Christopher Tunnard and enhanced by the placing of a sculpture by Henry Moore at the end of a screen wall. Bentley Wood seems to have anticipated the much vaunted steel-framed houses by Mies and others in its unaffected coolness; Sir John Summerson memorably wrote how its 'beautifully sited hollow rectangles suppressed every vanity of "style" and merely touched the environment into conscience of form: it was the most aristocratic English building of the decade'.

But building his masterpiece bankrupted Chermayeff just before the outbreak of the second world war and the following year — having failed to find useful work in England — he moved to the United States. From an insular historical perspective, Chermayeff rather fades away at this point but the greater part of his career still lay in the future and it is one of the triumphs of Powers's elegant and well-illustrated mono graph that he brings out the importance and interest of the American years. Although he built a few houses, the rest of his working life was devoted to teaching: in Chicago, at Harvard then at Yale. Chermayeff was a cruel but inspiring teacher of architects and, whether for better or worse, his influence may be detected in the work of Richard Rogers and Norman Foster, both at Yale in 1961.

What is impressive is that Chermayeff moved beyond mere architecture. Always a romantic, and always interested in the work of painters, he began to investigate the wider possibilities of architecture in terms of the building of cities, the natural environment and the relationship between art and science. With Christopher Alexander, he published Community and Privacy in 1963 which reflects both his deep interest in the planning of houses and his concern to seek protection against the destructive noise of the modern world. Powers notes that Chermayeff was among the first to use the word 'ecology' in an architectural context and, as a civilised European, he deplored the degeneration of the American city and the decline of public transport. 'Technology, industry and the family car have degraded cities, transforming them from havens for wealthy residents into ghettos for the new poor,' he wrote in 1974, He also deplored the loss of the idealism that once motivated modern architects: 'I hate architects en masse,' he remarked. 'They're a dreary bunch, just like doctors.' I warm to him.

The exhibition at Kettle's Yard does this elegant, complicated visionary belated justice and there are examples of his furniture and of the wireless sets he designed on display to confirm what a stylish designer he was. Yet there seemed to me something melancholy about it all. That may be because of the fragile poignancy of the giant blow-up of the Dell & Wainwright photograph of Barbara Chermayeff sitting on the terrace at Bentley Wood — surely one of the very few British buildings of its time that deserves full restoration. But knowledge of the subsequent vulgar mutilation of that house merely contributes to a wider sense of loss and tragedy which Chermayeffs extraordinary itinerant career across two continents and two world wars emphasises.

It was the exhibition at the Hayward Gallery in 1987 that described Le Corbusier as the 'Architect of the Century', but perhaps that title is more appropriately applied to Serge Chermayeff. Born at the very beginning of the 20th century, he almost saw it out and in his long and tortuous journey from Grozny to Cape Cod he was touched by its many horrors and stupidities as well as motivated by its optimism and the search for something new and better.