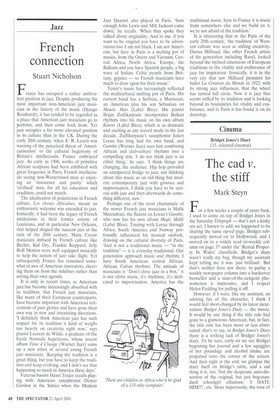 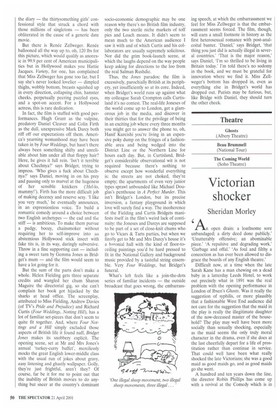 For a few weeks a couple of years back, I used to come on top of Bridget Jones in the Saturday Telegraph — that's not a kinky sex act, I hasten to add; we happened to be sharing the same op-ed page. Bridget subsequently moved on to Hollywood, and I moved on to a widely read tri-weekly column on page 37 under the 'Rental Property In Wales' classifieds. Bridget's diary wasn't really my bag, though my assistant kept telling me it was 'just brilliant'. But that's neither here nor there: to parlay a weekly newspaper column into a hardcover bestseller and a state-of-the-zeitgeist phenomenon is impressive, and I respect Helen Fielding for pulling it off.

However, if I were, like my assistant, an adoring fan of the character, I think I would feel short-changed by its latest incarnation: Bridget Jones's Diary — the movie. It would be one thing if the title role had gone to a glamorous American, but, in fact, the title role has been more or less eliminated: that's to say, in Bridget Jones's Diary there is a striking lack of Bridget Jones's diary. To be sure, early on we see Bridget beginning her journal and a few squiggles of her poundage and alcohol intake are projected onto the corner of the screen. And then right at the end, we glimpse the diary itself on Bridge's table, and a sad thing it is, too. Not the desperate auto-dissection of the original, but just bog-standard schoolgirl effusions: 'I HATE HIM!!!', etc. More importantly, the tone of

the diary — the thirtysomething girls' confessional style that struck a chord with those millions of singletons — has been obliterated in the cause of a generic date movie.

But there is Renee Zellweger. Renee ballooned all the way up to, oh, 120 lbs for this picture, which would qualify as anorexic in 99.9 per cent of American municipalities but in Hollywood makes you Hattie Jacques. Variety, for one, has complained that Miss Zellweger has gone too far, but I say she's never looked lovelier — dimpled thighs, wobbly bottom, breasts squished up in every direction, collapsing chin, hamster cheeks, perpetually peering puzzled eyes, and a spot-on accent. For a Hollywood actress, this is rare dedication.

In fact, the film is stuffed with good performances. Hugh Grant as the vulpine, predatory Daniel Cleaver and Cohn Firth as the dull, unexpressive Mark Darcy both riff off our expectations off them. America's yearning womanhood may have been taken in by Four Weddings, but hasn't there always been something shifty and unreliable about him under all that floppy hair? Here, he gives it full rein. 'Isn't it terrible about Chechnya?' says Bridget, trying to impress. 'Who gives a fuck about Chechnya?' says Daniel, moving in on his prey and pausing only to marvel at the hugeness of her sensible knickers mummy!'). Firth has the more difficult job of making decency and reserve sexy. 'I like you very much,' he eventually announces, in an expressionless voice. To build a romantic comedy around a choice between two English archetypes — the cad and the stiff — is ambitious. To make them pursue a pudgy, boozy, chainsmoker without requiring her to self-improve into an abstemious Hollywood stick insect with fake tits is, in its way, daringly subversive. Throw in a fine supporting cast — including a sweet turn by Gemma Jones as Bridget's mum — and the film would seem to have a lot going for it.

But the sum of the parts don't make a whole. Helen Fielding gets three separate credits and wangled her chum Sharon Maguire the directorial gig, so she can't complain her book got hijacked by the sharks at head office. The screenplay, attributed to Miss Fielding, Andrew Davies (of TV's Pride and Prejudice) and Richard Curtis (Four Weddings, Notting Hill), has a lot of familiar set-pieces that don't seem to quite fit together. And, where Four Nottings and a Hill simply excluded those aspects of British life it found naff. Bridget Jones makes its snobbery explicit. The opening scene, set at Mr and Mrs Jones's annual 'turkey-curry buffet', mercilessly mocks the great English lower-middle class with the usual run of jokes about gravy, easy listening and ghastly wallpaper. Golly, they're just frightful, aren't they? Of course, far be it for me to point out that the inability of British movies to do anything but sneer at the country's dominant socio-economic demographic may be one reason why there's no British film industry, only the two sterile niche markets of toff pies and Loach moans. It didn't seem to mean much to the American audience I saw it with and of which Curtis and his collaborators are usually supremely solicitous. Nor did the grim book-launch scene, at which the laughs depend on the way people keep asking for directions to the loo from the real Salman Rushdie.

Thus, the Jones paradox: the film is excessively, parochially British at its periphery, yet insufficiently so at its core. Indeed, when Bridget's world runs up against what my colleague Sarah Crompton calls Curtisland it's no contest. The real-life Joneses of the world come up to London, get a glamorous job in the media, and discover in their thirties that for the privilege of being in an exciting job where every three months you might get to answer the phone to, oh, Hanif Kureishi you're living in an expensive poky dump on the fringes of a fashionable area and being wedged into the District Line or the Northern Line for hours each day. But, in Curtisland, Bridget's considerable observational wit is not required because there's nothing to observe except how wonderful everything is: the streets are not choked, they're empty; the apartments of even very junior types sprawl unbounded like Michael Douglas's penthouse in A Perfect Murder. This isn't Bridget's London, but its precise inversion, a fantasy playground in which love will surely find a way. The incoherence of the Fielding and Curtis Bridgets manifests itself in the film's weird lack of continuity: the Joneses and Darcys are supposed to be part of a set of close-knit chums who go to Vicars & Tarts parties, but when we finally get to Mr and Mrs Darcy's house it's a baronial hall with the kind of floor-toceiling paintings you'd be hard pressed to fit in the National Gallery and background music provided by a tasteful string ensemble. Very Four Weddings, but Bridget's funeral.

What's left feels like a join-the-dots series of familiar incidents — the outside broadcast that goes wrong, the embarrass

ing speech, at which the embarrassment we feel for Miss Zellweger is that the embarrassment seems forced. The film, though, will earn a small footnote in history as the first heterosexual romance with post-analcoital banter. 'Daniel,' says Bridget, 'that thing you just did is actually illegal in several countries.' That is the major reason,' says Daniel, 'I'm so thrilled to be living in Britain today.' I'm told there's no sodomy in the book, and we must be grateful for innovation where we find it. Miss Zellweger's bottom has dropped in, even as everything else in Bridget's world has dropped out. Purists may be furious, but, like Bridge with Daniel, they should turn the other cheek.