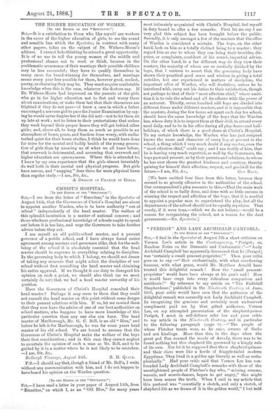 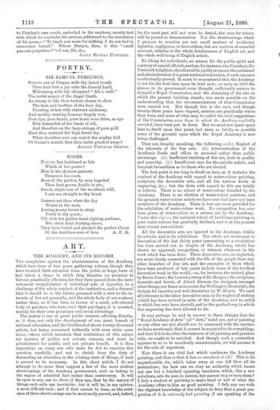 SIR,—I find in the Spectator of August 7th a short criticism on Vernon Lee's article in the Contemporary, " Perigot ; or, Random Notes on the Dramatic and Undramatic :"—" Lady Archibald Campbell has apparently discovered that he [Perigot] was certainly a small peasant-proprietor.' " Then your critic) goes on to say :—" How enchantingly, with what overflowing humour, with what grace, would Mr. Matthew Arnold have treated this delightful remark ! How the ' small peasant- proprietor' would have been always at his pen's end ! How it would have crept into every ridiculous comparison and antithesis !" By reference to my article on " The Faithful' Shepherdesse," published in the Nineteenth Century of June, 1885, your critic would hive seen that the authoress of the delightful remark was assuredly not Lady Archibald Campbell. In recognising the gracious and certainly most undeserved compliment paid me by that gifted authoress, Vernon Lee, on my attempted presentation of the shepherd-prince Perigot, I must in self-defence refer her and your critic to my article in the Nineteenth Century, and in particular to the following paragraph (page 6):—" The people of whom Fletcher treats were, as he says, owners of flocks and not hirelings. More than this, in the days when the great god Pan roamed the woods of Arcady, there was to be found nothing but this shepherd•life governed by a kingly rule of its own. Nor let it be snpposei that these shepherd-princes and their clans were like a horde of draggle-tailed modern Egyptians. They lived in a golden age literally as well as meta- phorically." Had your critic said that Vernon Lee has con- founded Lady Archibald Campbell's remarks with those of the unenlightened people of Fletcher's day who, " missing creams, weasels, and morris-dances, began to get angry," this might have been nearer the truth. When I said in my article that this pastoral was " essentially a sketch, and only a sketch, of shepherd-life as we dream of it in the golden world," I bat held

to Fletcher's own words, embodied in the cautious, caustic text with which he concludes his preface, addressed to the murderers of his poem,—" To teach you more for nothing I do not feel in conscience bound." Whose Perigot, then, is this " small peasant-proprietor ?"—I am, Sir, &c., JANEY SEVILLA CAMPBELL.