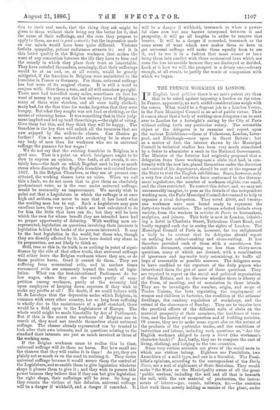 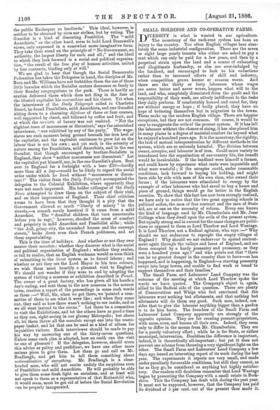 THE FRENCH WORKMEN IN LONDON.

IN English local politics there is no more potent cry than that to be raised against imposing a burden on the rates. In France, apparently, no such sordid considerations weigh with the voters. What would be a flagrant job in a London Vestry, in the Paris Municipal Council is an act of public virtue. Thus it comes about that a body of working-men delegates can be sent over to London for a fortnight's outing by the City of Paris without calling forth any particular outcry. The ostensible object of the delegates is to examine and report upon the various Exhibitions—those of Folkestone, London, Liver- pool, and Edinburgh—now open in Great Britain ; but as a matter of fact, the interest shown by the Municipal Council in technical studies has been very much stimulated by a desire to administer a snub to the National Government. The Minister of the Interior had originally proposed that a delegation from those working-men's clubs that had, in con- formity with the new law, placed themselves under the direction and control of his department, should be sent at the expense of the State to visit the English exhibitions. Since, however, only a very few clubs and societies have conformed to the Govern- ment regulations, the number of workmen eligible was small, and the class restricted. To correct this defect, and, we may not unreasonably imagine, to pose as the friends of the independent working men, the Paris Municipal Council determined to help to organise a rival delegation. They voted £600, and twenty- one workmen were soon found ready to represent the forty-two trade societies. The artisans selected include every variety, from the workers in articles de Paris to bootmakers, sculptors, and joiners. This body is now in London, inhabit- ing a hotel in Charlotte Street, Tottenham Court Road, and busily engaged each day in seeing the sights of London. The Municipal Council of Paris is, however, far too enlightened a body to be content that its delegates should report on nothing but cabinet-making and stone-cutting. It has therefore provided each of them with a Inandat,—a for- midable document, containing no less than thirty-seven questions, many of which are devised, with a combination of ignorance and ingenuity truly astonishing, to baffle all hope of reasonable or possible answers. The delegates seem to have confided to the reporters of the daily papers who interviewed them the gist of most of these questions. They are required to report on the social and political organisation of Great Britain, and to discover whether there is liberty of the Press, of meeting, and of association in these islands. They are to investigate the number, origin, and scope of Trades Unions, the laws regulating the employment of women and children in factories, the condition of the artisans' dwellings, the sanitary regulation of workshops, and the extent of the observance of Sunday. They are to inquire into the practical effects of the different sorts of clubs on the material prosperity of their members, the incidence of taxa- tion, and the history of oo-operation and of building societies. Of course, they are to make some report also on the nature of the products of the particular trades, and the conditions of instruction and labour, including such questions as, "Are the English workmen obliged to carry a hunt (the workman's character-book) ?" And, lastly, they are to compare the cost of living, clothing, and lodging in the two countries.

Some very curious accounts are given of the social sects to which our visitors belong. Eighteen are Possibilists, two Anarchists of a mild type, and one is a Guesdist. The Possi- bilist's opinions, according to the correspondent of the Daily News, are a sort of nightmare of State Socialism. They would make "the State or the Municipality owner of all the great ' public services,' including the soil and all that is beneath the soil, with the raw material of production, the instru- ments of labour—gas, canals, railways, &c.—the societies that work them merely holding as renters of the plant, under the public Exchequer as landlords." This ideal, however, is neither to be obtained by riots nor strikes, but by voting. The Guesdist is a kind of dissenting Possibilist. The " mild Anarchists," on the other hand, seem to hold Lord Bramwell's views, only expressed in a somewhat more imaginative form. They take their stand on the principle of " No Government, no authority, the largest liberty for each and all ;" and the ideal to which they look forward is a social and political organisa- tion, " the result of the free play of human activities, united by free contracts, binding only at will." We are glad to hear that though the Social Democratic Federation has taken the Delegates in hand, the disciples of Mr.

Burn and Mr. Williams have not forbidden them the use of those little luxuries which the Socialist orators denounce so freely to their Sunday congregations in the park. There is hardly an oration delivered there which does not fling in the face of the bloated capitalist his maraschino and his claret. Yet when the interviewer of the Daily Telegraph called in Charlotte Street, he found Possibilists, mild Anarchists, and one Guesdiet sitting down to a charming de:joiner of three or four courses, well supported by claret, and followed by coffee and fruit, and at which the serviette of luxury was not omitted. "Not the slightest trace of moroseness or discontent," says the astonished interviewer, " was exhibited by any of the party." The wage- slaves are each moment being ground beneath the iron heel of the capitalist, and the capitalist continues to grow fat on the labour that is not his own ; and yet such is the serenity of nature among the Possibilists, mild Anarchists, and in the one Guesdist, that though encouraged by brother-Socialists in England, they show " neither moroseness nor discontent." Let the capitalist put himself, say, in the one Guesdist's place. Sent over to England for a fortnight with a bare £30—hardly more than £2 a day—would he be likely to regard the social order under which he lived without " moroseness or discon- tent ?" The visitor from the Daily Telegraph accompanied the delegates to the Colonial Exhibition, where apparently they were not much impressed. His bolder colleague of the Daily News attempted to draw them on the subject of their visit, and on their impressions of England. Their chief criticism seems to have been that they thought it a pity that the Government allowed so much "liberty of misery " in the streets,—a remark surely heretical if it came from a mild Anarchist. The " dreadful children that turn somersaults before you in rage," however, shocked the sense of comfort and propriety in mild Anarchist and Possibilist alike ; while "the dull, grimy city, the unwashed houses and the unswept streets," broke down even their French politeness, and set them expostulating. This is the time of holidays. And whether or not they ever master their mandats; whether they discover what is the social and political organisation of England ; whether they realise, or fail to realise, that an English workman would as soon think of submitting to the livret system as to forced labour ; and whether or not they see the Lord Mayor in his true colours, we wish them most heartily a pleasant visit to England. We should not wonder if they were to end by adopting the system of visiting a museum or exhibition described in Punch. The owner of a great factory, who has given all his hands a day's outing, and sent them to the new museum in the nearest town, receives a report of the proceedings in some such words as these :—" Well, Sir, when we got there, we 'pointed a com- mittee of three to see what it were like ; and when they come out, they said as how there wasn't nothing to see inside, and so we all went instead to the circus." Let there be a committee to visit the Exhibitions, and let the others have as good a time as they can, sight-seeing in our gloomy Metropolis ; but above all, let them throw all the mandats except one into the waste- paper basket, and let that one be used as a kind of album for inquisitive visitors. Each interviewer should be made to pay his way by answering one of the thirty-seven questions. Unless some such plan is adopted, how on earth can the visit be one of pleasure ? If the delegates, however, should scorn this advice as paltry and perfidious, we have one other more serious piece to give them. Let them go and call on Mr. Bradlaugh, and get him to tell them something about nationalisation of everything. Mr. Bradlaugh is a clear- headed man, who will not excite unduly the suspicions even of Possibilists and mild Anarchists. He will probably be able to give them some fresh light on socialism, and at least will not speak to them as a representative of that Rothschild who, it would seem, must be got rid of before the Social Revolution can be properly inaugurated.