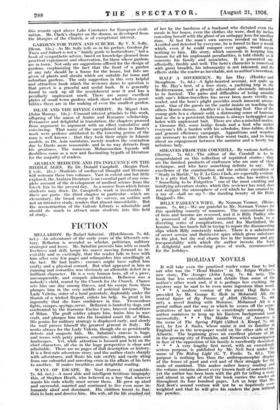 It will take even the practised reader some time to find out who was the "Head Hunter" in Mr. Edgar Wallace's new story, The Avenger (John Long. 7s. 6d. net). The book has less convolutions and details than some of the author's other work and, if it is .perhaps less exciting, the mystery may be said to be even more ingenious than usual. *, * * A modern version of the great Haji Baba is provided by Mr.- George E. Holt in Mohamed Ali, the central figure of By Favour of Allah (Melrose, 7s. 6d. net), a nover dealing with Morocco.- Mdhamed Ali is a genial ruffian and the way in which he scores off the repre- sentatives of law and order is exceedingly- amusing. The author contrives to keep up his EaStern background most successfully. * * * The Middle West of America Is the scene of The Spring Flight (Alfred A. Knopf, .7s. a net), by Lee J. Smit,s, whose natne-._ is not so familiar in England as in the newspaper world on the other side of the Atlantic. The beginning gives an excellent picture of life in the growing city of Franklin, and Kenneth's emancipation in face of the opposition of his family is excellently described. * * A very lengthy first novel, with an exceedingly serious purpose, is published by Mr. Neil Scot under the name of The Riding Light (G. T. Foulis. 7s. 6d.). This purpose is nothing less than the anthropomorphic display of the forces of good and evil and of their struggle for the souls of- mankind. This makes rather heavy reading and the volume contains almost every known fault of construction, yet the author has been born with the gift for telling a story and almost in spite of itself the book carries the reader on throughout its four hundred pages. Let us hope that Me. Neil Scot's second venture will not be so hopelessly over- weighted and .that -he will give his readers the jam without