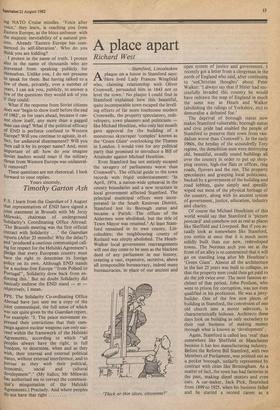 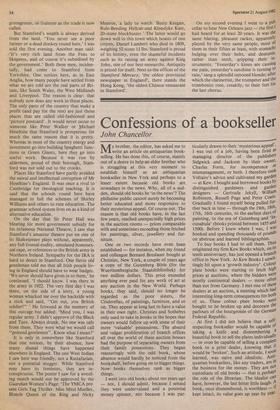 Aplaque on a house in Stamford says: 'Here lived Lady Frances Wingfield who, claiming relationship with Oliver Cromwell, persuaded him in 1643 not to level the town.' No plaque I could find in Stamford explained how this beautiful, quite incomparable town escaped the levell- ing efforts of far more loathsome modern Cromwells, the property speculators, rede- velopers, town planners and politicians like Michael Heseltine, who only last month gave approval for the building of a monstrous skyscraper 'complex' known as the 'Green Giant' overlooking the Thames in London. I would vote for any political party that promised to introduce a Bill of Attainder against Michael Heseltine.

Even Stamford has not entirely escaped the savagery of parliaments worse than Cromwell's. The official guide to the town records with frigid understatement: 'In April, 1974, a nation-wide upheaval in the county boundaries and a new structure in local government affected Stamford. The principal municipal offices were incor- porated in the South Kesteven District, Stamford lost its Borough status and became a Parish. The offices of the Aldermen were abolished, but the title of Town Mayor was retained.' At least Stam- ford remained in its own county, Lin- colnshire; the neighbouring county of Rutland was simply abolished. The Heath- Walker local government rearrangements will one day come to be seen as the blackest deed of any parliament in our history, creating a vast, expensive, secretive, above all irresponsible bureaucracy, indeed many bureaucracies, in place of our ancient and

open system of justice and government. I recently got a letter from a clergyman in the north of England who said, after confessing to 'unChristian thoughts' about Peter Walker: 'I always say that if Hitler had suc- cessfully invaded this country he would have redrawn the map of England in much the same way as Heath and Walker (abolishing the ridings of Yorkshire, etc) to demoralise a defeated foe.'

The deprival of borough status now makes Stamford vulnerable; borough status and civic pride had enabled the people of Stamford to preserve their town from van- dalism worse than Cromwell's. In the early 1960s, the heyday of the scoundrelly Tory regime, the demolition men were destroying old, beautiful, usually sound buildings all over the country in order to put up shop- ping centres, high-rise flats or offices, ring roads, flyovers and the rest. The property speculators and grasping local politicians, backed by a government of the building and road lobbies, quite simply and speedily wiped out most of the physical heritage of the country, along with its ancient system of government, justice, education, industry and charity.

Of course the Michael Heseltines of this world would say that Stamford is 'picture postcard' and somehow not as real as places like Sheffield and Liverpool. But if you ac- tually look at somewhere like Stamford, you notice at once that it is much more solidly built than our new, redeveloped towns. The Norman arch you see at the front of an alley is so constructed that it will go on standing long after Mr Heseltine's 'Green Giant'. Almost all the architecture in the last 25 years was built to collapse, so that the property men could then get paid to do the job twice over. The most famous ar- chitect of that period, John Poulson, who went to prison for corruption, was not even qualified in his profession. He was a jerry- builder. One of the few new pieces of building in Stamford, the conversion of one old church into a motor saleroom, is characteristically hideous. Architects these days look on building as only secondary to their real business of making money through what is known as 'development'.

Again, Stamford is called less 'real' than somewhere like Sheffield or Manchester because it has less manufacturing industry. Before the Reform Bill Stamford, with two Members of Parliament, was pointed out as a pocket borough, unfairly represented by contrast with cities like Birmingham. As a matter of fact, the town has had factories in the past, making diesel motors and even cars. A car-maker, Jack Pick, flourished from 1899 to 1925, when his business failed and he started a second career as a greengrocer, or fruiterer as the trade is now called.

But Stamford's wealth is always derived from the land. 'You never see a poor farmer or a dead donkey round here,' I was told the first evening. Another man said: .`It's very rich land from the Fens to Skegness, and of course it's subsidised by the government.' Both these men, inciden- tally, had come to Stamford from Yorkshire. One notices here, as in East Anglia, how many people have settled from what we are told are the real parts of Bri- tain, like South Wales, the West Midlands and Liverpool. The reason is clear: that nobody now does any work in those places. The only parts of the country that make a profit (and pay for the rest) are just those places that are called old-fashioned and `picture postcard'. It would never occur to someone like Peter Walker or Michael Heseltine that Stamford is prosperous for much the same reason that it is pretty. Whereas in most of the country energy and investment go into building Spaghetti Junc- tions or Green Giants, here they go into useful work. Because it was run by aldermen, proud of their borough, Stam- ford was not sold out to the crooks.

Places like Stamford have partly avoided the moral and intellectual corruption of Mr Heseltine's England. It was once a rival to Cambridge for theological teaching. It is said that the schools round here have managed to foil the schemes of Shirley Williams and others to ruin education. The grammar school system lives on as a kind of alternative education.

On the day that Sir Peter Hall was bleating for more government subsidy for his infamous National Theatre, I saw that Stamford's amateur theatre put on one of its Shakespeare plays without, apparently, any full-frontal nudity, simulated homosex- ual rape, or references to the British army in Northern Ireland. Sympathy for the IRA is hard to detect in Stamford. One fierce old gentleman told me that all Irish people liv- ing in England should have to wear badges. `We never should have given in to them,' he continued. 'I should know. I was there in the army in 1922. The very first day I was there, on the side of a lorry, a young woman whacked me over the back-side with a stick and said, "Get out, you British soldier!" ' He frowned at the memory of this outrage but added: 'Mind you, I was regular army. I didn't approve of the Black and Tans. Always drunk. No one was safe from them. They were what we would call "pretend gentlemen". Know what I mean?'

It is only in somewhere like Stamford that one notices, by their absence, how many dismal things have happened elsewhere in England. The one West Indian I saw here was friendly, not a Rastafarian, nor a potential mugger. While Stamford may have its feminists, they are in- conspicuous. The poster I saw for a wrestl- ing match would not be approved by the Guardian Women's Page: 'The YMCA pre- sent Girls Tag Thriller. Miss Mitzi Mueller, Blonde Queen of the Ring and Nicky Monroe, a lady to watch. Busty Keegan, Rule-Bending Hellcat and Klondyke Kate, 20-stone blockbuster.' -The latter would go down well in this town which boasts of one citizen, Daniel Lambert who died in 1809, weighing 52 stone 11 lbs. Stamford is proud of its history, even the shameful incidents such as its raising an army against King John, one of our best monarchs. Antiquity is prized for itself. Next to the offices of the Stamford Mercury, 'the oldest provincial newspaper in England', there stands the Hong Kong, 'the oldest Chinese restaurant in Stamford'. On my second evening I went to a pub cellar to hear New Orleans jazz — the first I had heard for at least 20 years. It was the same blaring, pleasant racket, apparently played by the very same people, most of them in their fifties at least, with stomachs bulging over their belts, and dentures, rather than teeth, gripping their In- struments. 'Yesterday's kisses are causing me pain, yesterday's sunshine is turning to rain,' sang a splendid tattooed blonde; after which the clarinettist, the trumpeter and the trombonist rose, creakily, to their feet for the last chorus.