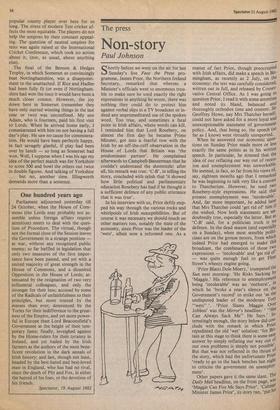 Parliament adjourned yesterday till 24 October, when the House of Com- mons (the Lords may probably not as- semble unless foreign affairs require attention) meets to deal with the ques- tion of Procedure. The virtual, though not the formal close of the Session leaves the Government in a strange position at war, without any recognised public enemy; so far baffled in legislation that only two measures of the first impor- tance have been passed, and yet with a united majority of great strength in the House of Commons, and a disunited Opposition in the House of Lords; at- tenuated by the resignation of two very influential colleagues, and only the stronger for their loss; accused by some of the Radicals of unfaithfulness to their principles, but more trusted by the masses than ever; denounced by the Tories for their indifference to the great- ness of the Empire, and yet more power- ful in Europe than Lord Beaconsfield's Government at the height of their tem- porary fame; finally, inveighed against by the Home-rulers for their tyranny in Ireland, and yet hailed by the Irish farmers as the authors of the most bene- ficent revolution in the dark annals of Irish history; and last, though not least, headed by the best-hated and best-loved man in England, who has had no rival, since the death of Pitt and Fox, in either the hatred of his foes, or the devotion of his friends.