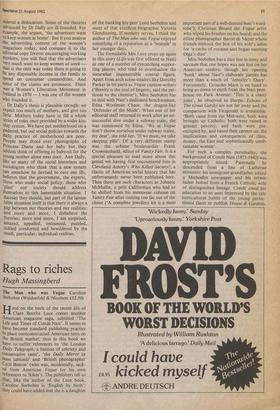 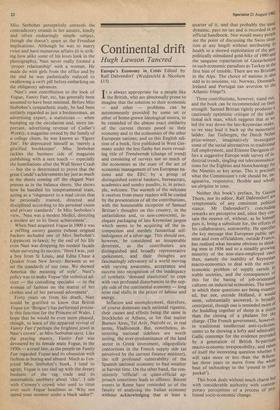 The Man who was Vogue Caroline Seebohm (Weidenfeld & Nicolson £12.50)

Hard on the heels of the recent life of Clare Boothe Luce comes another American magazine saga, subtitled 'The Life and Times of Conde Nast'. It seems to have become standard publishing practice to place unreconstructed American texts on the British market; thus in this book we have to suffer references to 'the London Daily Telegraph, a bastion of sobriety and Conservative taste', 'the Daily Mirror (a Mass tabloid)' and 'British photographer Cecil Beaton' (who was, incidentally, sack- ed from American Vogue for his own references to `kikes'). The publishers tell us that, like the author of the Luce book, Caroline Seebohm is 'English by birth'; they could have added that she is a daughter of the banking life peer Lord Seebohm and sister of that excellent biographer Victoria Glendinning. If memory serves, I think the author of The Man who was Vogue enjoyed something of a reputation as a 'beatnik' in her younger days.

The formidable Mrs Luce crops up again in this story (Life was first offered to Nast) as one of a number of eyecatching suppor- ting players who tend to overshadow the somewhat impenetrable central figure. Apart from arch scene-stealers like Dorothy Parker in bit parts as Vogue caption-writers (`Brevity is the soul of lingerie, said the pet- ticoat to the chemise'), Miss Seebohm has to deal with Nast's dedicated henchwoman, Edna Woolman Chase, the dragon-like `Defender of the Mode'. When one of her editorial staff returned to work after an un- successful dive under a subway train, she was summoned by Edna. 'We at Vogue don't throw ourselves under subway trains, my dear', she told her. 'If we must, we take sleeping pills'. Of a very different stamp was the urbane boulevardier Frank Crowninshield, editor of Vanity Fair. It is a special pleasure to read more about this genial wit having first encountered him in Cleveland Amory's Who Killed Society?, a classic of American social history that has unfortunately never been published here. Then there are such characters as Johnnie McMullin, a petit Californian who had to be shifted from his menswear column on Vanity Fair after coming too far out of the closet ('A complete jewellery kit is a most important part of a well-dressed man's ward- robe'); Christian Berard the Vogue artist who wiped his brushes on his beard; and the effete photographer Baron de Meyer whose friends mistook the box of his wife's ashes for 'a cache of cocaine and began snorting Olga's dust'.

Miss Seebohm has a nice line in irony and sarcasm that one hopes was not lost on her American readers, though her opening `hook' about Nast's elaborate parties has more than a touch of 'Jennifer's Diary'. Fortunately, Groucho Marx is on hand to bring us down to earth from the Nast pent- house on Park Avenue: 'This is a classy joint', he observed to Harpo. Echoes of The Great Gatsby are not far away and the comparison with Fitzgerald is irresistible: `Both came from the Mid-west, both were brought up Catholic; both were raised in genteel poverty; and both were pre- occupied by, and based their careers on, the implications and consequences of class, money, the East and sophisticatedly unob- tainable women'.

For such a complex personality, the background of Conde Nast (1873-1942) was appropriately mixed. Paternally he descended from a line of Lutheran ministers; his immigrant grandfather edited a Methodist newspaper and his erratic father bolted from a French Catholic wife of distinguished lineage. Conde owed his education to an aunt impressed by the tidy horticultural habits of the young perfec- tionist (later to publish House & Garden).

Miss Seebohm perceptively unravels the contradictory strands in her austere, kindly and often endearingly simple subject, though she doesn't spare us the Freudian implications. Although he was to marry twice and have numerous affairs (it is strik: ing how alike some of his loves look in the photographs), Nast never really formed a 'proper relationship' with a woman. He made do with girls from the office and by the end he was pathetically reduced to swallowing a swift pill before embarking on the obligatory advances.

Nast's own contribution to the look of Vogue, Vanity Fair, etc, has generally been assumed to have been minimal. Before Miss Seebohm's sympathetic study, he had been unfairly regarded as just a businessman, an advertising expert, a statistician — when bumping up the circulation and, more im- portant, advertising revenue of Collier's Weekly, a magazine owned by the family of a college chum, he was known as 'Figure Jim'. He deprecated himself as 'merely a glorified bookkeeper'. Miss Seebohm tackles the business side of magazine publishing with a sure touch — especially the humiliations after the Wall Street Crash — but she is determined to prove that the great Conde's achievements lay just as much in the sheets coming off the elegant Nast presses as in the balance sheets. She shows how he handled his temperamental team, acting as a 'ringmaster to a mad circus that he personally trained, directed and disciplined according to his personal vision and private standards'. In Miss Seebohm's view, 'Nast was a modest Medici, directing a modest art to its finest achievement'.

When Nast acquired Vogue in 1909 it was a piffling society gazette (whose original backers included one of Miss Seebohm's Lippincott in-laws); by the end of his life even Nast was dropping his modest facade when surveying its success. 'Here I was, just a boy from St Louis, and Edna Chase a Quaker from New Jersey. Between us we set the standards of our time. We showed America the meaning of style'. Nast's policy was to make Vogue 'the technical ad- viser — the consulting specialist — to the woman of fashion on the matter of her clothes and of her personal adornment'.

Forty years on from his death, Nast would be gratified to know that British Vogue (or 'Brogue') has performed precise- ly this function for the Princess of Wales. I hope that he would be even more pleased, though, to learn of the apparent revival of Vanity Fair ('perhaps the brightest jewel in Nast's crown', as Miss Seebohm says). Like the praying mantis, Vanity Fair was devoured by its female mate Vogue, in the 1930s — a cruel fate, as the people on Vanity Fair regarded Vogue and its obsession with fashion as boring and absurd. Much as I en- joyed Miss Seebohm's book, I tend to agree; Vogue is too tied up with the dreary business of the rag trade and its materialistic snobbery about 'chic'. I side with Crowny's crowd who used to titter over such Vogue headlines as 'Why not spend your summer under a black sailor?'