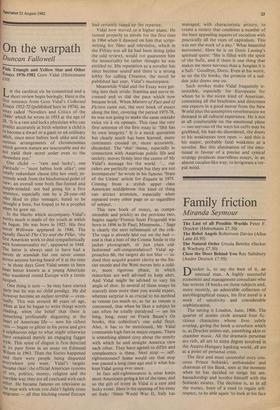 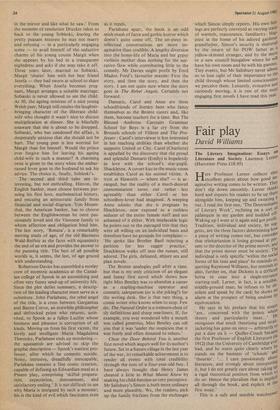 Close the Door Behind You Ray Salisbury (Andre Deutsch £7.95)

Drucker is, to say the least of it, an unusual man. A highly successful economist and management consultant who has written 18 books on those subjects and, more recently, an admirable collection of autobiographical essays, his first novel is a work of sensitivity and considerable sophistication.

The setting is London, June, 1906. The quartet of stories circle around four fic- titious characters whose lives subtly overlap, giving the book a structure which is, as Drucker points out, something akin to chamber music. All the dramatis personae are rich, all are to some degree involved in the Austro-Hungary banking world, all are at a point of personal crisis.

The first and most successful story con- cerns Prince Sobieski, ambassador and chairman of the Bank, seen at the moment when he has decided to resign his am- bassadorship and involve himself with the Sobieski estates. The decision is, as in all the stories, born of a need to regain self- respect, to be able again `to look at his face in the mirror and like what he saw.' From the moment of resolution Drucker takes us back to the young Sobieski, leaving the pretty peasant mistress he may not marry and refusing — in a particularly engaging scene — to avail himself of the seductive charms of his young cousin Margit when she appears by his bed in a transparent nightdress and asks if she may take it off. Three years later, married to Sobieski, Margit 'shares' him with her best friend Josefa — they had sworn at school to share everything. When Josefa becomes preg- nant, Margit arranges a suitable marriage; Sobieski is never allowed to see the child. At 50, the ageing mistress of a nice young Welsh peer, Margit still retains the laughter- bringing character of the illiterate child- wife who thought it wasn't nice to discuss multiplication at dinner. She is blissfully unaware that she is about to be dropped. Sobieski, who has condoned the affair, is desperately anxious that she should not be hurt. The young peer is less worried for Margit than for himself. Would the prince ever forgive him for leaving his ageing child-wife in such a manner? A charming twist is given to the story when the embar- rassed lover goes to the husband to ask his advice. The choice is, finally, Sobieski's.

The second and third tales are in- teresting, but not enthralling. Hinton, the English banker, must choose between pur- suing his first love, mathematical history, and rescuing an aristocratic family from financial and social disgrace. Von Mosen- thal, the American banker, has to choose between the Englishwoman he once pas- sionately loved and the Viennese family to whom affection and obligation bind him. The last story, `Renata', is a remarkably moving study of age, of the old Baroness Wald-Reifniz as she faces with equanimity the end of an era and provides the answer to the punning title. The best of all possible worlds is, it seems, the last, of age graced with understanding.

Robertson Davies has assembled a motley crew of eccentric academics at the Canad- ian college of Spook in an astonishing and often very funny send-up of university life. Since the plot defies summary, a descrip- tion of the leading character must serve as a substitute. John Parlabane, the rebel angel of the title, is a cross between Gargantua and Baron Corvo, an erstwhile philosopher and defrocked priest who returns, unin- vited, to Spook as a fallen Lucifer whose business and pleasure is corruption of all kinds. Moving on from his first victim, the lovely and intelligent Maria Magdalena Theotoky, Parlabane ends up murdering the squeamish are advised to skip the graphic description — Spook's nastiest pro- fessor, after which he commits suicide. Noisy, intrusive, dreadfully inescapable, Parlabane remains a fine comic creation, capable of defining an Edwardian meal as a Pinero play, comprising 'skilful prepara- tidn, expectation, denouement, and satisfactory ending.' It is not difficult to see why Maria is intrigued by such a monster; his is the kind of evil which fascinates even as it repels.

Parlabane apart, the book is an odd mish-mash of farce and gothic horror which doesn't quite come off. The set-piece in- tellectual conversations are more im- aginative than credible. A lengthy diversion into the home-life of Maria and her gypsy violinist mother does nothing for the nar- rative flow while contributing little to the comedy. Mr Davies might profit by Ford Madox Ford's favourite maxim: First the story, and then the story, and then the story. I am not quite sure where the story goes in The Rebel Angels. Certainly not forward.

Damaris, Carol and Anne are three schoolfriends of literary bent who fancy themselves as the Bronte sisters and, like them, become teachers for a time. But The Blessed Ambrose Carstairs Grammar School for Boys is a far cry from the Brussels schools of Villette and The Pro- fessor: Carol's interviewer is less interested in her teaching abilities than whether she supports United or City. Carol (Charlotte) is appalled by the discovery that the proud and splendid Damaris (Emily) is hopelessly in love with the school's star-pupil, Shackleton. A covert kiss in the music room establishes Carol as his second victim. A tryst at Haworth — where else? — is ar- ranged, but the reality of a much-desired consummation turns out rather less agreeably than either Carol or her schoolboy-lover had imagined. A weeping Anne admits that she is pregnant by Shackleton, now exposed as a ruthless seducer of the entire female staff and not ashamed of it either. With implacable logic he points out to the outraged trio that they were all willing on an individual basis and therefore have no grounds for complaint:— 'He spoke like Brother Basil rejecting a petition for less rugger practice.' Shackleton walks off into the sunset, still adored. The girls, defeated, abjure sex and plan novels.

The Bronte analogies pall after a time, but that is my only criticism of an elegant and funny first novel which shows how right Miss Bentley was to abandon a career as a stapling-machine operator and cosmetic salesperson (or is she joking?) for the writing desk. She is that rare thing, a comic writer who knows when to stop. Few do. The Natural Order is a treasure-chest of sly definitions and sharp one-liners. If, for example, you ever wondered why a mouth was called generous, Miss Bentley can tell you that it was 'under the suspicion that it was freely and often donated to others.'

Close the Door Behind You is another first novel which augurs well for its author's future. Set in a Sussex village in the last year of the war, its remarkable achievement is to render all events with total credibility through the eyes of a four-year-old boy. I have always thought that Henry James cheated a little in What Maisie Knew by making his child-heroine so very perceptive. Mr Salisbury's Simon is both more ordinary and more plausible. We, the readers, pick up the family frictions from the exchanges

which Simon simply reports. His own feel- ings are perfectly conveyed as varying states of warmth, reassurance, familiarity. Hap" piest in the home of his adored gardener grandfather, Simon's security is shattered by the return of his POW father as a yellow-skinned stranger, and by the move to a new council bungalow where he will have his own room and be with his parents. Tiny events, but Mr Salisbury never allows us to lose sight of their importance to the child through whose limited consciousness we perceive them. Leisurely, evocative and curiously moving, it is one of the most engaging first novels 1 have read this year.