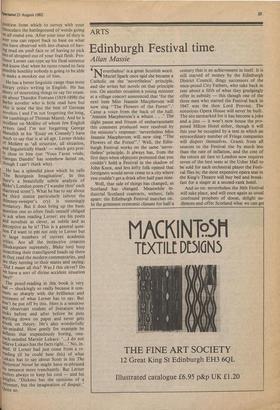 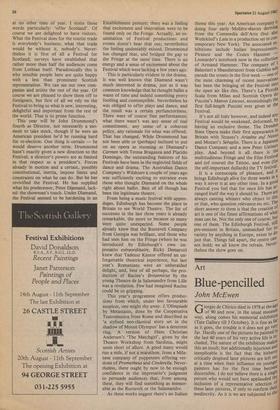 evertheless' is a great Scottish word. Muriel Spark once skid she became a Catholic on the 'nevertheless' principle, and she writes her novels on that principle too. On another occasion a young minister at a village concert announced that 'for the next item Miss Jeannie Macpherson will now sing "The Flowers of the Forest".' Came a voice from the back of the hall: `Jeannie Macpherson's a whure . . .' The slight pause and frisson of embarrassment this comment produced were resolved by the minister's response: 'nevertheless Miss Jeannie Macpherson will now sing "The Flowers of the Forest".' Well, the Edin- burgh Festival works on the same 'never- theless' principle. It always has, from the first days when objectors protested that you couldn't hold a Festival in the shadow of John Knox, and less lofty folk opined that foreigners would never come to a city where you couldn't get a drink after half past nine.

Well, that side of things has changed, as Scotland has changed. Meanwhile in- dustrial Scotland contracts, withers, falls apart: the Edinburgh Festival marches on. In the grimmest economic climate for half a

century that is an achievement in itself. It is still starved of money by the Edinburgh District Council, dingy successors of the once-proud City Fathers, who take back in rent about a fifth of what they grudgingly offer in subsidy — this though one of the three men who started the Festival back in 1947 was the then Lord Provost. The notorious Opera House will never be built. The site earmarked for it has become a joke and a jinx — it won't now house the pro- posed Hilton Hotel either, though it will this year be occupied by a tent in which an extraordinary number of Fringe companies will disport themselves. Grants from all sources to the Festival rise by much less than the rate of inflation, and the cost of the return air fare to London now requires seven of the best seats at the Usher Hall to be sold for each orchestral player the Festi- val flies in; the most expensive opera seat in the King's Theatre will buy bed and break- fast for a singer at a second-rank hotel.

And so on: nevertheless the 36th Festival will take place, and will once again as usual confound prophets of doom, delight au- diences and offer Scotland what we can get

at no other time of year. I stress those words particularly: 'offer Scotland'. Of course we are delighted to have visitors. What the Festival does for the tourist trade is everybody's business; what that trade would be without it, nobody's. Never- theless it is first of all a Festival for Scotland; surveys have established that rather more than half the audiences come from Lothian itself. Paradoxically this is why sensible people here are quite happy with a less than prominent Scottish representation. We can see our own com- panies and artists the rest of the year. Of course we are pleased to show them off to foreigners, but first of all we rely on the Festival to bring us what is new, interesting, delightful and important from the rest of the world. That is its prime function.

This year will be John Drummond's fourth as Director, not necessarily a mo- ment to take stock, though if he were an American president he'd be running hard for re-election. One thing is certain — he would deserve another term. Drummond hasn't exactly given a new direction to the Festival; a director's powers are as limited in that respect as a president's. Forces already in motion and a certain, possibly constitutional, inertia, impose limits and constraints on what he can do. But he has revivified the Festival. He has supplied what his predecessor, Peter Di,amand, lack- ed: the showman's touch. Under Diamand, the Festival seemed to be hardening in an

Establishment posture; there was a feeling that excitement and innovation were to be found only on the Fringe. Actually, an ex- amination of Festival productions and events doesn't bear that out; nevertheless the feeling undeniably existed. Drummond has changed that, and bridged the gap to the Fringe at the same time. There is an energy and a sense of excitement about the Festival which were lacking a few years ago.

This is particularly evident in the drama. It was well known that Diamand wasn't much interested in drama, just as it was common knowledge that he thought ballet a waste of time and indeed something pretty footling and contemptible. Nevertheless he was obliged to offer plays and dance, and the result was a certain perfunctoriness. There were of course fine performances; what there wasn't was any sense of real commitment, any sense of a coherent policy, any rationale for what was offered. That has changed. While Drummond has not been able or (perhaps) inclined to put on an opera as stunning as Diamand's Carmen with Teresa Braganza and Placido Domingo, the outstanding features of his Festivals have been in the neglected fields of dance and drama. The Australian Dance Company's Wildstars a couple of years ago was sufficiently exciting to entrance even those who thought Diamand on the whole right about ballet. Best of all though has been the legitimate theatre.

From being a music festival with appen- dages, Edinburgh has become the place in Britain to see World Theatre. The list of successes in the last three years is already remarkable, the more so because so many were quite unexpected. Some people already knew that the Rustaveli Company from Georgia was brilliant, and those who had seen him on the Fringe (where he was introduced by Edinburgh's own im- presario extraordinaire, Ricky Demarco) knew that Tadeusz Kantor offered an un- forgettable theatrical experience, but last year's Romanians were an unheralded delight, and, best of all perhaps, the pro- duction of Racine's Britannicus by the young Theatre de la Salamandre from Lille was a revelation. Few had imagined Racine could be so gripping.

This year's programme offers produc- tions from which, under less favourable auspices, one might shy away. L'Olimpiade by Metastasio, done by the Cooperativa Teatromusica from Rome and described as 'a stylised neo-classical story set in the shadow of Mount Olympus' has a deterrent ring. A version of Hans Christian Andersen's 'The Matchgirl', given by the Theatre Workshop from Sardinia, might seem short of allure. A good many would run a mile, if not a marathon, from a Mila- nese company of puppeteers offering ver- sions of Prometheus and Cinderella. Never- theless, there ought by now to be enough confidence in the impresario's judgment to persuade audiences that, from among these, they will find something as memor- able as the Rustaveli or the Salamandre.

As these works suggest there's an Italian

theme this year. An American company is doing four early Moliere %farces deriving from the Commedia dell'Arte (but also Wedekind's Lulu in a production set in con- temporary New York). The associated ex' hibitions include Italian Impressionists, Piranesi and the Codex Hammer Leonardo's notebook now in the collection of Armand Hammer. The company of.1 Balestieri e Sbandieratori from Gubbio parade the streets in the first week — one of the most charming of recent innovations has been the bringing of the Festival into the open air like this. There's La Piccolo Scala from Milan and Scottish Opera do Puccini's Manon Lescaut, astonishinglY the first full-length Puccini ever given at the Festival.

It's not all Italy however, and indeed anY Festival would be weakened, deformed, by having an exclusive theme. The Dresden State Opera make their first appearance ID Britain with Strauss's Ariadne auf islax°c and Mozart's Seraglio. There is a Japanese Dance Company and a new Peter Ustinov play. And beyond it all there is the, multitudinous Fringe and the Film Festival and (of course) the Tattoo, and even (Or the self-important dullards) the TV festival. It is a cornucopia of pleasure, and It brings Edinburgh alive for three weeks in a way it never is at any other time. In a god Festival you feel that for once life has ar- ranged itself the way it should be. There are always canting whiners who object to this or that, who question relevance etc etc. The, short answer to them is that the creation of art is one of the finest affirmations of what man can be. Not the only one of course, but one of them. The Edinburgh Festival, still pre-eminent in Britain, unmatched for Its variety by anything in Europe, exists to do just that. Things fall apart, the centre can' not hold; we all know the refrain. Never- theless the show goes on.