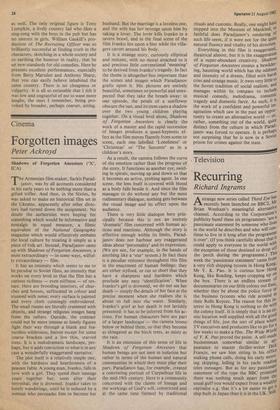 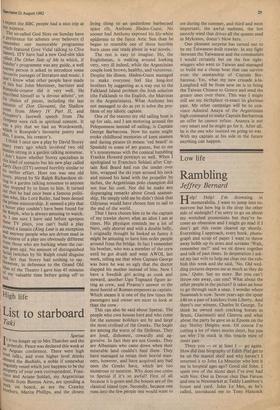 Astrange new series called Third Eye has recently been launched on BBC2, Mr Brian Wenham's meaningful alternative channel. According to the Corporation s publicity bumf these six programmes `are 3 passionate statement by someone who lives in the world he describes and who will con' tinue to live in it long after the programroe is over'. (If you think carefully about that it could apply to everyone in the world with the exception of those destined to drop oft, the perch during the programme.) This week the 'passionate statement' came from a very rich shipping tycoon in Hong Kong, Mr Y. K. Pao. It is curious how Hong Kong, like Reading, keeps cropping uP on the box. There is an endless stream of documentaries on our little colony out East, whether they be about the police force or the business tycoons who ride around 10

their Rolls Royces. The reason for this n' terest in Hong Kong is nothing to do With the colony itself. It is simply that it is an e%" otic location well supplied with all the good things of life, just the sort of place where TV executives and producers like to go for a few weeks to make a film. The Wide world of Y. K. Pao proved the point. A self-made businessman somewhat similar in aP,- pearance to master thriller-writer Die" Francis, we saw him sitting in his office making phone calls, doing his early morn- ing skipping, lolling in his yacht reading telex messages. But as for any passionate, statement of the type the BBC promised there was nothing much apart from the usual guff you would expect from a wealthy capitalist e.g. that it's a lot easier to get a ship built in Japan than it is in the UK. Still, I expect the BBC people had a nice trip at oUr expense. The so-called God Slots on Sunday have a preference for atheists over believers (I remember one memorable programme Which featured Gore Vidal talking to Clive James). ITV have had a new God-slot idea called The Other Side of Me in which, if Sunday's programme was any guide, a well kr,nown person is asked to introduce some Favourite passages of literature and music. I don't know what other people have made of this but John Mortimer, barrister and RuntPole-creator did it very well. He described himself as 'a devout atheist', yet his choice of pieces, including the last Minutes of Don Giovanni, the Shallow scene from Henry IV Part II, and Prospero's farewell speech from The Tempest were rich in spiritual content. It wa,.s a pity that we had no Wordsworth, Which is Rumpole's favourite poetry and also, I guess, his creator's. I think I once saw a play by David Storey many years ago which involved two old loonies sitting in a garden talking nonsense. I don't know whether Storey specialises in this kind of scenario but his new play called his Days (ITV) seemed horribly similar to ins earlier effort. Here too was one old °IV, played by Sir Ralph Richardson sit- tin in a garden talking nonsense to anyone Who stopped by to listen to him. It turned out that he had once been a famous politi- cian who, like Lord Butler, had been denied the Prime ministership. It seemed a pity that a.better play couldn't have been sin found for Sir Ralph, who is always amug to watch. 4,s I am sure I have said before apropos 'ese TV plays, you can't build a play around a lunatic (King Lear is an exception 4,11c1 anyway people who are driven mad in the course of a play are obviously different trout those who are barking when the cur- 'fain goes up). No amount of distinguished the twitches by Sir Ralph could disguise 4-te fact that Storey had nothing to say. owever, in deference to the Grand Old 1,11 of the Theatre I gave him 45 minutes 0ed.

rnY valuable time before going off to o