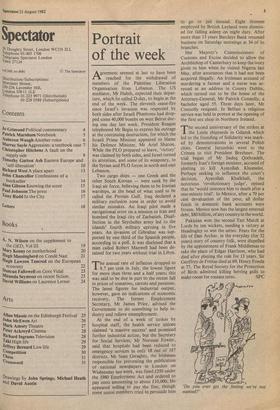 Agreement seemed at last to have been reached for the withdrawal of members of the Palestine Liberation Organisation from Lebanon. The US mediator, Mr Habib, expected their depar- ture, which he called D-day, to begin at the end of the week. The eleventh cease-fire since Israel's invasion was respected by both sides after Israeli Phantoms had drop- ped some 40,000 bombs on west Beirut dur- ing one day last week. President Reagan telephoned Mr Begin to express his outrage at the continuing destruction, for which the Israeli Prime Minister appeared to blame his Defence Minister, Mr Ariel Sharon. While the PLO prepared to leave, 'victory' was claimed by both sides, and Israel turned its attention, and some of its weaponry, to the Syrian and PLO forces in north and east Lebanon.

Two cargo ships — one Greek and the other South Korean — were sunk by the Iraqi air force, believing them to be Iranian warships, at the head of what used to be called the Persian Gulf. Iraq declared a military exclusion zone in order to avoid similar mistakes. An Iraqi pilot made a navigational error on a mission to Iran and bombed the Iraqi city of Zarbatieh. Disaf- fection in the Seychelles army led to the islands' fourth military uprising in five years. An invasion of Gibraltar was sup- ported by one third of the Spanish people, according to a poll. It was disclosed that a man called Robert Maxwell had been de- tained for two years without trial in Libya.

The annual rate of inflation dropped to 8.7 per cent in July, the lowest figure for more than three and a half years; this was said to be due in part to the recent fall in prices of tomatoes, carrots and potatoes. The latest figures for industrial output, however, gave no indications of economic recovery. The former Employment Secretary, Mr James Prior, advised the Government to do something to help in- dustry and relieve unemployment.

At the end of a week of strikes by hospital staff, the health service unions claimed 'a massive success' and promised further industrial action, but the Secretary for Social Services, Mr Norman Fowler, said that hospitals had been reduced to emergency services in only 18 out of 187 districts. Mr Sean Geraghty, the Irishman responsible for preventing the publication of national newspapers in London on Wednesday last week, was fined £350 under the 1980 Employment Act and ordered to pay costs amounting to about £10,000. He appeared willing to pay the fine, though some union members tried to persuade him to go to jail instead. Eight firemen employed by British Leyland were dismiss- ed for falling asleep on night duty. After more than 13 years Barclays Bank resumed business on Saturday mornings at 34 of its branches.

Her Majesty's Commissioners of Customs and Excise decided to allow the Archbishop of Canterbury to keep the ivory given to him when he visited Nigeria last May, after assurances that it had not been acquired illegally. An Irishman accused of murdering a farmer and a nurse was ar- rested at an address in County Dublin, which turned out to be the home of the Attorney-General, Mr Patrick Connolly, a bachelor aged 55. Three days later, Mr Connolly resigned. In Belfast a religious service was held in protest at the opening of the first sex shop in Northern Ireland.

The second anniversary of the strikes at the Lenin shipyards in Gdansk which led to the founding of Solidarity was mark- ed by demonstrations in several Polish cities. General Jaruzelski went to the Crimea to visit President Brezhnev. The trial began of Mr Sadeq Qotbzadeh, formerly Iran's foreign minister, accused of plotting to kill Ayatollah Khomeini. Perhaps seeking to influence the court's decision, Ayatollah Khalkhali, the notorious 'revolutionary judge', opined that he 'would sentence him to death after a one-minute trial'. In Mexico, after a 70 per cent devaluation of the peso, all dollar funds in domestic bank accounts were frozen. Mexico now has the largest external debt, $80 billion, of any country in the world.

Pakistan won the second Test Match at Lords by ten wickets, needing a victory at Headingley to win the series. Fears for the life of Dan Archer, in the everyday (for 32 years) story of country folk, were dispelled by the appointment of Frank Middlemas to take the place of Edgar Harrison, who had died after playing the role for 13 years. Sir Geoffrey de Freitas died at 69, Henry Fonda at 77. The Royal Society for the Protection of Birds admitted killing herring gulls to make room for roseate terns. SPC

Do you ever get the feeling we're not wanted?'