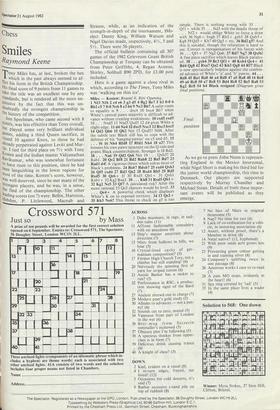 Tony Miles has, at last, broken the hex Which in the past always seemed to af- flict his form in the British Championship. His final score of 9 points from 11 games to take the title was an excellent one by any standards, but is rendered all the more im- Pressive by the fact that this was un- doubtedly the strongest championship in the history of the competition. Jon Speelman, who came second with 8 Points, was less effective than Tony overall, but played some very brilliant individual games, adding a third Queen sacrifice, in round 10 against Knox, to those he had already perpetrated against Levitt and Mar- tin. I tied for third place on 71/2 with Tony Kosten and the Indian master Vidyanathan Ravikumar, who was somewhat fortunate to have risen to this position, since he had been languishing in the lower regions for Most of the time. Kosten's score, however, was well deserved, since he met many of the strongest players, and he was, in a sense, ,the find of the championship. The other leading scores (on 7) were: Bellin, Hartston, Hebden P. Littlewood, Macnab and

Strauss, while, as an indication of the strength-in-depth of the tournament, IMs- elect Danny King, William Watson and Nigel Davies made, respectively, 41/2, 5 and 5 1/2. There were 56 players.

The official bulletin containing all 307 games of the 1982 Grieveson Grant British Championship at Torquay can be obtained from Peter Griffiths, 4, Regan Avenue, Shirley, Solihull B90 2PD, for £3.00 post included.

Here is a game against a close rival in which, according to The Times, Tony Miles was 'walking on thin ice'.

As we go to press John Nunn is represen- ting England in the Mexico Interzonal, while Nigel Short is making his third bid for the junior world championship, this time in Denmark. Our players are supported respectively by Murray Chandler and Michael Stean. Details of both these impor- tant events will be published as they emerge.