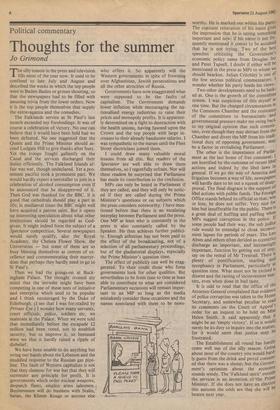 Thoughts for the summer

The silly season in the press and television fills most of the year now. It used to be confined to late July and August and described the weeks in which the top people were in Baden-Baden or grouse shooting, so that the newspapers had to be filled with amusing trivia from the lower orders. Now it is the top people themselves that supply the extravaganza and the comedies.

The Falklands service at St Paul's last month exceeded my forebodings. It was of course a celebration of victory. No one can believe that it would have been held had we been defeated. No one suggested that the Queen and the Prime Minister should as- cend Ludgate Hill to give thanks after Suez. Yet the troops fought gallantly on the Canal and the services discharged their duties efficiently. The Falkland Islands af- fair was war, though undeclared. Yet a pro- minent pacifist took a prominent part. We would hardly expect a teetotaller to join in a celebration of alcohol consumption even if he announced that he disapproved of it. Then God was thanked for the BBC. It is good that cathedrals should play a part in life; in mediaeval times the BBC might well have acquired a patron saint. But it opens up interesting speculation about what other institutions should be regarded as God- given. It might indeed form the subject of a Spectator competition. Several newspapers would surely qualify, also the Royal Academy, the Chelsea Flower Show, the Universities — but some of them are so busy blessing themselves as centres of ex- cellence and commemorating their martyr- dom that perhaps they hardly need to go to St Paul's.

Then we had the goings-on at Buck- ingham Palace. The thought crossed my mind that the intruder might have been competing in one of those tests of initiative and enterprise which used to be popular and I think encouraged by the Duke of Edinburgh. (I see that I was for:stalled by Private Eye.) I wonder how many servants, court officials, police, soldiers etc. we maintain at the Palace. When we were told that immediately before the escapade £2 million had been voted, not to establish security, but to improve it, so bemused were we that it hardly raised a ripple of disbelief.

We have been unable to do anything but wring our hands about the Lebanon and the muddled response to the Russian gas pipe- line. The fault of Western capitalists is not that they clamour for war but that they will surrender any principle for profit. It is governments which order nuclear weapons, despatch fleets, employ arms salesmen. Businessmen will do business with Stalin, Satan, the Khmer Rouge or anyone else, who offers it. So apparently will the Western governments in spite of frowning over Afghanistan, Jewish persecutions and all the other atrocities of Russia.

Governments have now exaggerated what were supposed to be the faults of capitalism. The Government demands lower inflation while encouraging the na- tionalised energy industries to raise their prices and monopoly profits. It is apparent- ly determined on a fight to destruction with the health unions, having fawned upon the Crown and the top people with large in- creases to their already handsome salaries. I was sympathetic to the nurses until the Fleet Street electricians joined them.

I could draw many valuable moral lessons from all this. But readers of the Spectator are well able to draw them themselves, so I regretfully refrain. Nor will these readers be surprised that Parliament has made its contribution to the confusion.

MPs can only be heard in Parliament if they are called, and they will only be notic- ed if they are called during the Prime Minister's questions or on subjects which the press considers noteworthy. I have men- tioned before that there is an escalating interplay between Parliament and the press. One MP at least who is constantly in the press is also constantly called by the Speaker. He then achieves further publici- ty. Enough atfention has not been paid to the effect of the broadcasting, not of a selection of all parliamentary proceedings, but of the gladiatorial displays, especially the Prime Minister's question time.

The effect of publicity can well be exag- gerated. To their credit those who form governments look for other qualities. But nevertheless to be from time to time at least able to contribute to what are considered Parliamentary occasions will remain impor- tant to an MP so long as the media mistakenly consider these occasions and the names associated with them to be news-

worthy. He is marked out within his party. The constant reiteration of his name gives the impression that he is saying something important and new: if his name is not fre- quently mentioned it comes to be assumed that he is not trying. Two of the best speeches criticising the Government's economic policy came from Douglas Jay and Peter Tapsell. I doubt if either will be mentioned in the press as MPs to whom we should hearken. Julian Critchley is one of the few serious political commentators. I wonder whether his party heeds his views. Two other developments need to be look- ed at. One is the growth of the committee system. I was suspicious of this myself at one time. But the changed circumstances in the Commons Chamber and the resistance of the committees to bureaucratic and governmental pressure make me swing back to my original opinion that such commit- tees, even though they may detract from the Chamber and divert the MP from his tradi- tional duty of opposing government, may be a factor in revitalising Parliament. The other is the importance of Parlia- ment as the last home of free comment. I am horrified by the outcome of recent Ube actions and indeed by the libel laws in general. If we go the way of America and litigation becomes a way of life, newspapers will hardly dare to let out a squeak of disap- proval. The final disgrace is the support of libel actions with public funds. The Foreign Office stands behind its official so that, wilt or lose, he does not suffer. Very nice for him but insufferable for the public. There is a great deal of huffing and puffing when MPs suggest corruption in the police. If some people had their way, the sub judice rule would be extended to cloak inconve- nient lapses for periods of years. The Leo Abses and others often derided as eccentrics discharge an important, and increasinglY important, function by getting out of step, say on the retiral of Mr Trestrail. There is plenty of pontification, snarling and sycophancy in Parliament, particularly at question time. What must not be excised is dissent and the raising of inconvenient mat- ters, even when done in bad taste. It is odd to read that the office of the Attorney-General complained that evidence of police corruption was taken to the Horne Secretary, and somewhat peculiar to read its comments on the Court of Appeal's order for an inquest to be held on Miss Helen Smith. It said apparently that It might be an `empty victory'. If so it would surely be its duty to inquire into the matter, for it would seem that justice may be frustrated.

The Establishment all round has hardlY come well out of the silly season. Going about most of the country you would hard" ly guess from the drink and petrol consunl" ed that there was a slump; but the Govern- ment's optimism about the economy sounds windy. The 'Falkland spirit' outside the services is an invention of the Prime Minister. If she does not have an election this autumn the odds are that she will be beaten next year.