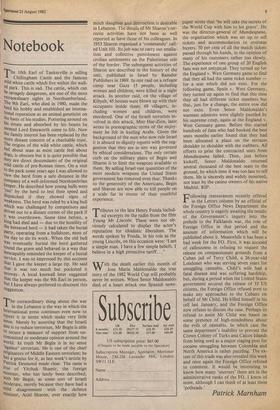 The 10th Earl of Tankerville is selling Chillingham Castle and the famous Wild white cattle which live within the wall- ed park. This is sad. The cattle, which can be savagely dangerous, are one of the most extraordinary sights in Northumberland. The 9th Earl, who died in 1980, made the herd his hobby and established an interna- tional reputation as an animal geneticist on the basis of his studies. Pottering around on his estate and absorbed by his beasts he seemed Lord Emsworth come to life. Now the family interest has been replaced by the More distant concern of a charitable trust. The origins of the wild white cattle, which feel about man as most cattle feel about dogs, is obscure but it is quite possible that they are direct descendants of the original wild cattle of pre-Roman times. On a visit to the park some years ago I was allowed to view the herd from a safe distance in the company of a well-informed Northumbrian keeper. He described how young bulls were run' by the herd to test their speed and dispatched if they showed signs of Weakness. The herd was ruled by a king bull which was challenged by competitors and driven out to a distant corner of the park if it was overthrown. Some time before, a king had died and — due to the hostility of the bereaved herd — it had taken the burial Party, operating from a bulldozer, most of the day to do its work. When the old bull was eventually buried the herd gathered round the grave and behaved in a way that inescapably reminded the keeper of a burial service. I was so impressed by this account that I gave the keeper a large tip. He said that it was too much but pocketed it anyway. A local knowall later suggested that the keeper was the 9th Earl in person, but I have always preferred to discount this suggestion.

1.1 he extraordinary thing about the war in the Lebanon is the way in which the international press continues even now to report it in terms which make very little sense. Merely by asserting that the Israeli aim is to reduce terrorism, Mr Begin is able to secure a measure of support from un- committed or moderate opinion around the World. In truth Mr Begin is in no sense against' terrorism. He is one of the chief originators of Middle Eastern terrorism; he ,has a genius for it, as last week's article by Patrick Desmond made clear. The same is true of Yitzhak Shamir, the foreign Minister, who has lately been described, With Mr Begin, as some sort of Israeli moderate, merely because they have had a mild disagreement with the defence minister, Ariel Sharon, over exactly how

much slaughter and destruction is desirable in Lebanon. The details of Mr Sharon's ter- rorist activities have not been as well reported as have those of his colleagues. In 1953 Sharon organised a 'commando' call- ed Unit 101. Its job was to carry out retalia- tion and collective punishment against civilian settlements on the Palestinian side of the border. The subsequent activities of Sharon are described in the history of the unit, published in Israel by Ramdor Publishers in 1969. In one raid on a refugee camp near Gaza 15 people, including women and children, were killed in a night attack. In another raid, on the village of Kibyeh, 45 houses were blown up with their occupants inside them; 69 villagers, in- cluding women and children, were murdered. One of the Israeli terrorists in- volved in this attack, Meir Har-Zion, later wrote in pornographic terms of the enjoy- ment he felt in knifing Arabs. Given the background of the men who now rule Israel it is absurd to dignify reports with the sug- gestion that they are in any way governed by ethical considerations. The only certain curb on the military plans of Begin and Sharon is to limit the weapons available to them. By selling Israel vast quantities of the most modern weapons the United States government has removed even that. Thanks to the generosity of the Americans, Begin and Sharon are now able to kill people on a scale far in excess of their youthful experience.

1ed excerpts on the radio from the film Young Mr Lincoln. These were not ob- viously calculated to display the actor's reputation for idealistic liberalism. The words spoken by Fonda, in his role as the young Lincoln, on this occasion were: 'I am a simple man. I have a few simple beliefs. I believe in a high protective tariff...'

With the death earlier this month of Jose Maria Maldonaldo the true story of the 1982 World Cup will probably never be written. When Senor Maldonaldo died of a heart attack one Spanish news- paper wrote that 'he will take the secrets of the World Cup with him to his grave'. He was the director-general of Mundiespana, the organisation which was set up to sell tickets and accommodation to overseas buyers. 50 per cent of all the match tickets passed through his hands, in the opinion of many of his customers rather too slowly. The experience of one group of 20 English fans was not untypical. They turned up for the England v. West Germany game to find that they all had the same ticket number for a seat which did not exist. For the following game, Spain v. West Germany, they turned up again to find that this time they all had different ticket numbers but that, just for a change, the entire row did not exist. Even Senor Maldonaldo's warmest admirers were slightly puzzled by his supreme coup, again at the England v. West Germany game. Before this started hundreds of fans who had booked the best seats months earlier found that they had been allocated a place on the terraces shoulder to shoulder with the stabbers. All efforts to prise the contracted seats from Mundiespana failed. Then, just before kickoff, Senor Maldonaldo returned several thousand of the best seats to the ground, by which time it was too late to sell them. He is sincerely and widely mourned, not least by the casino owners of his native Madrid. RIP. .

ollowing reassurances recently offered F in the Letters column by an official of the Foreign Office News Department the whole country is eagerly awaiting the results of the Government's inquiry into the prelude to the Falklands war, the role of Foreign Office in that period and the amount of information which will be published about it. Meanwhile it has been a bad week for the FO. First, it was accused of callousness in refusing to request the release on compassionate grounds from a Cuban jail of Terry Child, a 26-year-old Londoner who was serving seven years for smuggling cannabis. Child's wife had a fatal disease and was suffering hardship, but, during a period when the United States government secured the release of 33 US citizens, the Foreign Office refused even to make any approaches to the Cubans on behalf of Mr Child. He killed himself in his cell last January, and the Foreign Office now refuses to discuss the case. Perhaps its refusal to assist Mr Child was based on some pretence of high-mindedness about the evils of cannabis. In which case the same department's inability to prevent the Crown Colony of Turks and Caicos Islands from being used as a major staging post for cocaine smuggling between Colombia and North America is rather puzzling. The ex- tent of this trade was also revealed this week and once again the Foreign Office refused to comment. It would be interesting to know how many 'snorters' there are in the administrative ranks of the FO. I know of none, although I can think of at least three `potheads.'