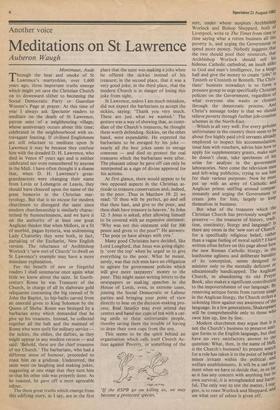 A uberon Waugh Montmaur, Aude Through the heat and smoke of St Lawrence's martyrdom, over 1,600 years ago, three important truths emerge which might yet save the Christian Church on its downward slither to becoming the Social Democratic Party or Guardian Women's Page at prayer. At this time of year I always ask Spectator readers to meditate on the death of St Lawrence, patron saint of a neighbouring village, whose anniversary occurs about this time, celebrated in the neighbourhood with ex- travagant feasting. If civilised Englishmen are still reluctant to meditate upon St Lawrence it may be because they confuse him with the dreaded D. H. Lawrence, who died in Vence 47 years ago and is neither celebrated nor even remembered by anyone in the Midi. I have often thought it a shame that, when D. H. Lawrence's great- grandparents were changing their name from Levin or Lohengrin or Leavis, they should have chanced upon the name of the great humorist in the Christian mar- tyrology. But that is no excuse for modern churchmen to disregard the saint since modern churchmanship is similarly charac- terised by humourlessness, and we have it on the authority of at least one great Anglican thinker that when Mellors, in a fit of morbid, pagan hysteria, was sodomising Lady Chatterley they were both, in fact, partaking of the Eucharist, New English version. The reluctance of Archbishop Worlock's 'new sort of Church' to dwell on St Lawrence's example may have a more mundane explanation.

For the benefit of new or forgetful readers I shall summarise once again what little we know about the saint. In fourth- century Rome he was Treasurer of the Church, in charge of all its elaborate gold reliquaries containing the big toenail of St John the Baptist, its hip-baths carved from an emerald given to King Solomon by the Queen of Sheba. Rome was besieged by a barbarian army which demanded that he give up his treasures. Instead, he collected together all the halt and the maimed of Rome who were unfit for military service the sickies, the oldies, the dafties, as they might appear in any modern version — and said: 'Behold, these are the chief treasures of my Church.' The barbarians, who had a different sense of humour, proceeded to roast him on a gridiron. Undeterred, the saint went on laughing and making jokes, suggesting at one stage that they turn him so that his other side was properly done. As he roasted, he gave off a most agreeable odour.

The three great truths which emerge from this edifying story, as I say, are in the first place that the saint was making a joke when he offered the sickies instead of his treasure; in the second place, that it was a very good joke; in the third place, that the modern Church is in danger of losing this joke from sight.

St Lawrence, unless I am much mistaken, did not expect the barbarians to accept the sickies, saying: 'Thank you very much. These are just what we wanted.' The gesture was a way of showing that, as custo- dian of the Church's treasures, he thought them worth defending. Sickies, on the other hand, were expendable. He expected the barbarians to be enraged by his joke nearly all the best jokes seem to enrage someone — and died to protect the real treasures which the barbarians were after. The pleasant odour he gave off can only be interpreted as a sign of divine approval for his actions.

At first glance, there would appear to be two opposed aspects in the Christian at- titude to treasure conservation and, indeed, to the poor. Thus in Matthew 19: 21 we read: 'If thou wilt be perfect, go and sell that thou hast, and give to the poor, and thou shalt have treasure in heaven.' In John 12: 5 Jesus is asked, after allowing himself to be covered with an expensive ointment: 'Why was not this ointment sold for 300 pence and given to the poor?' He answers: 'The poor ye have always with you.'

Many good Christians have decided, like Lord Longford, that Jesus was going slight- ly 'over the top' when he urged us to give everything to the poor. What he meant, surely, was that rich men have an obligation to agitate for government policies which will give more taxpayers' money to the poor. This might mean writing letters to the newspapers or making speeches in the House of Lords, even, in extreme cases, joining the Social Democratic or Labour parties . and bringing your point of view directly to bear on the decision-making pro- cess. Real fanatics may even attend day centres and hand out cups of tea with a car- ing smile to these unfortunate people, thereby saving them the trouble of having to draw their own cups from the urn.

This seems to be the spirit behind an organisation which calls itself Church Ac- tion against Poverty, or something of the 'If the RSPB go on killing us, we may become a protected species.' sort, under whose auspices Archbishop Worlock and Bishop Sheppard, both of Liverpool, write to The Times from time to time saying what a rotten business all this poverty is, and urging the Government to spend more money. Nobody suggests that the two should pool their resources, that Archbishop Worlock should sell his hideous Catholic cathedral, an insult alike to God and man's intelligence, for a bingo hall and give the money to create 'jobs' in Toxteth or Croxteth or Boxteth. The Chris- tians' business nowadays is to form a pressure group to urge specifically Christian policies on the Government, regardless of what everyone else wants or chooses through the democratic process. And Christ's message today is that we should relieve poverty through further job-creation schemes in the North-East. Which is all very well. For every genuine unfortunate in the country there seem to be about five highly paid civil servants already employed to inspect his accommodation, issue him with vouchers, advise him how to apply for supplementary grants, make sure he doesn't cheat, take specimens of his urine for analysis in the government laboratories. Next come the television men and left-wing publicists, trying to use him for their various purposes. Now he must put up with an army of Catholic and Anglican priests sniffing around comPas- sionately and urging the Government to create jobs for him, largely to keep themselves in business.

But what of the treasures which the Christian Church has previously sought to preserve — the treasures of history, tradi- tion, continuity, liturgy and language? Is there any room in the 'new sort of Church for a specifically religious belief, rather than a vague feeling of moral uplift? I have written often before on this page about how the new Roman Catholic liturgy, in the loathsome ugliness and deliberate banality of its conception, seems designed to minister only to the mentally deficient or educationally handicapped. The Anglican Church, in abandoning its old Prayer Book, also makes a significant contribution to the impoverishment of our language. BY removing antique forms from current usage in the Anglican liturgy, the Church strikes a sickening blow against our awareness of the language. In a few generations, Shakespeare will be comprehensible only to those who swot him up, line by line. Modern churchmen may argue that it is not the Church's business to preserve anti- que forms in the English language, but they have no very satisfactory answer to the question: What, then, in the name of Hell, is the Church's business? Its present search for a role has taken it to the point of being a minor irritant within the political and welfare establishments. It will be a sad mo- ment when we have to decide that, in so far as it has any concern with anything but its own survival, it is wrongheaded and harry' ful. The only way to test the matter, 1 sug,' gest, is to roast Worlock and Sheppard, and see what sort of odour is given off.