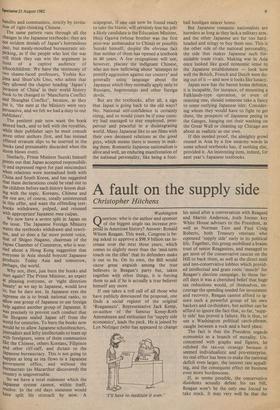 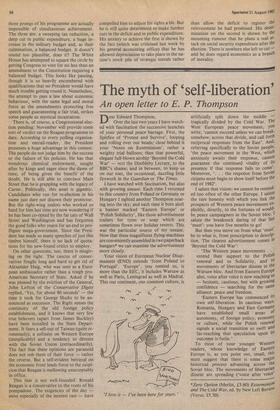 A fault on the supply side

Question: who is the author and sponsor of the biggest single tax increase pro- posal in American history? Answer: Ronald Wilson Reagan. This week, Congress is be- ing asked to approve a $98.9 billion tax in- crease over the next three years, which comes to slightly more than the 'mid-term touch on the tiller' that its defenders make it out to be. On its own, the Bill would cause great anguish among the true believers in Reagan's party but, taken together with other things, it is forcing them to ask if he is actually a true believer himself any more.

If one takes a roll call of all those who have publicly denounced the proposal, one finds a social register of the original `Reaganauts'. Representative Jack Kemp, co-author ' of the famous Kemp-Roth Amendment and enthusiast for 'supply side economics', leads the pack. He is joined by Lyn Nofziger (who has appeared to change

`I'll have to meditate it over.'

his mind after a conversation with Reagan) and Martin Anderson, both former key White House advisers to the President, as well as Norman Ture and Paul Craig Roberts, both Treasury veterans who espoused 'supply side' early in its political life. Together, this group mobilised a brains trust of senior Reaganites, and managed to get most of the conservative caucus on the Hill to back them, as well as the direct mail and neo-conservative lobbies which provid- ed intellectual and grass roots 'muscle' for Reagan's election campaign. In those far- off days it was a cherished belief that huge tax reductions would, of themselves, en- courage the spending needed for investment and recovery. Reagan cannot afford to ig- nore such a powerful group of his own backers and co-thinkers, but neither can he afford to ignore the fact that, so far, 'supp- ly side' has proved a failure. He is thus, to use a Washington political catch-phrase, caught between a rock and a hard place.

The fact is that the President regards economics as a branch of morality. Un- concerned with graphs and figures, he relished the tax-cut strategy because it seemed individualistic and pro-enterprise. Its real effect has been to make the national deficit even larger, the interest rate appall- ing, and the consequent effect on business even more burdensome.

If, as seems possible, the conservative dissidents actually defeat his tax bill, Reagan won't be the only one forced to take stock. It may very well be that the three prongs of his programme are actually impossible of simultaneous achievement. The three are: a sweeping tax reduction, a deep cut in public expenditure, a huge in- crease in the military budget and, as their culmination, a balanced budget. It doesn't sound too plausible, does it? The White House has attempted to square the circle by getting Congress to vote for no less than an amendment to the Constitution requiring a balanced budget. This looks like passing, though it is so heavily encumbered with qualifications that no President would have much trouble getting round it. Nonetheless, the attempt to pass a law about economic behaviour, with the same legal and moral force as the amendments protecting free speech and guaranteeing a fair trial, strikes some people as mystical incantation.

There is, of course, a Congressional elec- tion pending: November will provide some sort of verdict on the Reagan programme to date. According to every polling organisa- tion and entrail-reader, the President possesses a huge advantage in this contest. The people do not judge him by the success or the failure of his policies. He has that wondrous chemical endowment, sought after by kings and sages since the dawn of time, of being given the benefit of the doubt. He is still able to convince Main Street that he is grappling with the legacy of Carter. Politically, this asset is gigantic. Candidates who run for re-election in his name just dare not disown their protector. But the right-wing zealots who worked so hard for him last time are now wondering if he has been co-opted by the fat cats of Wall Street and Washington and has forgotten the good folks who yearn for an end to pro- fligate mega-government. Since the Presi- dent has made so many speeches of just this timbre himself, there is no lack of quota- tions for his new-found critics to employ.

On other questions, too, there is misgiv- ing on the right. The caucus of conser- vatives fought long and hard to get rid of Alexander Haig, who was seen as a Euro- pean ambassador rather than a tough pro- American Secretary of State. Asked if he was pleased by the eviction of the General, John Lofton of the Conservative Digest replied, 'Yes, for about 80 seconds' — the time it took for George Shultz to be an- nounced as successor. The Right senses the continuity of the old foreign policy establishment, and it knows that very few true believers (apart from James Buckley) have been installed in the State Depart- ment. It fears a sell-out of Taiwan (quite er- roneously), a softness on Western Europe (inexplicably) and a tendency to détente with the Soviet Union (extraordinarily). The fact that these opinions are paranoid does not rob them of their force — rather the reverse. But a self-evident betrayal on the economic front lends force to the suspi- cion that Reagan is mellowing unacceptably in office.

This fear is not well-founded. Ronald Reagan is a conservative to the roots of his pompadour. The exigencies of the day most especially of the interest rate — have compelled him to adjust his sights a bit. But he is still quite determined to make further cuts in the deficit and in public expenditure. His anxiety to achieve the first is shown by the fact (which was criticised last week by his general accounting office) that he has allowed depreciation to take place in the na- tion's stock pile of strategic metals rather

than allow the deficit to register the reinvestment he had promised. His deter- mination on the second is shown by the mounting rumour that he plans a real at- tack on social security expenditure after the election. There is nowhere else left to cut and he does regard economics as a branch of morality.