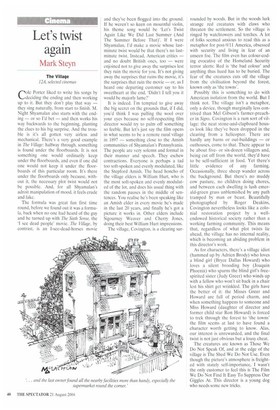 The Village 114, selected cinemas Cole Porter liked to write his songs by .....deciding the ending and then working up to it. But they don't play that way — they sing naturally, from start to finish. M. Night Shyamalan also starts with the ending — or so I'd bet — and then works his way backwards to the beginning, planting the clues to his big surprise. And the trouble is it's all gotten very airless and mechanical. There's a very good example in The Village: halfway through, something is found under the floorboards. It is not something one would ordinarily keep under the floorboards, and even if one did one would not keep it under the floorboards of this particular room. It's there under the floorboards only because, without it, the necessary plot twist would not be possible. And, for all Shyamalan's adroit manipulation of mood, it feels crude and fake.

The formula was great fun first time round, before we found out it was a formula, back when no one had heard of the guy and he turned up with The Sixth Sense, the 'I see dead people' movie. The Village, by contrast, is an I-see-dead-horses movie

and they've been flogged into the ground. If he weren't so keen on mournful violin, his theme song would be 'Let's Twist Again Like We Did Last Summer (And The Summer Before That)'. If I were Shyamalan, I'd make a movie whose lastminute twist would be that there's no lastminute twist. Instead, American critics — and no doubt British ones, too — were enjoined not to give away the surprises lest they ruin the movie for you. It's not giving away the surprises that ruins the movie, it's the surprises that ruin the movie — or, as I heard one departing customer say to his sweetheart at the end, 'Didn't I tell you it would be majorly lame?'

It is indeed. I'm tempted to give away the big secret on the grounds that, if I did, you'd think I was pulling the wool over your eyes because no self-respecting film director would try to palm off something so feeble. But let's just say the film opens in what seems to be a remote rural village in 1897 — something close to the Amish communities of Shyamalan's Pennsylvania. The people are very solemn and formal in their manner and speech. They eschew contractions. Everyone is perhaps a tad too soft-spoken and evenly modulated, like the Stepford Amish. The head honcho of the village elders is William Hurt, who is the most soft-spoken and evenly modulated of the lot, and does his usual thing with the random pauses in the middle of sentences. You realise he's been speaking like an Amish elder in every movie he's made in the last 20 years, and finally he's got a picture it works in. Other elders include Sigourney Weaver and Cherry Jones, doing their best William Hurt impressions.

The village, Covington, is a clearing sur

rounded by woods. But in the woods lurk strange red creatures with claws who threaten the settlement. So the village is ringed by watchtowers and torches. A lot of folks seemed anxious to read this as a metaphor for post-9/11 America, obsessed with security and living in fear of an unseen foe. The film even has colour-coding evocative of the Homeland Security terror alerts: Red is 'the bad colour' and anything thus hued has to be buried. The fear of the creatures cuts off the village from the civilisation beyond the forest, known only as 'the towns'.

Possibly this is something to do with American isolation from the world. But I think not, The village isn't a metaphor, only a device, though marginally less contrived than Mel Gibson's farmer-preacher in Signs. Covington is a rum sort of village: the neat stone-and-clapboard houses look like they've been dropped in the clearing from a helicopter. There are hardly any barns or out-buildings — or outhouses, come to that. There appear to be about fiveor six-dozen villagers and, being cut off from the world, they'd have to be self-sufficient in food. Yet there's little evidence of any farming. Occasionally, three sheep wander across the background. But there's no muddy cow pasture, no children doing chores, and between each dwelling is lush emerald-green grass unblemished by any path tramped by man or beast. Beautifully photographed by Roger Deakins, Covington nevertheless looks like a colonial restoration project by a wellendowed historical society rather than a working farming community. This means that, regardless of what plot twists lie ahead, the village has no internal reality, which is becoming an abiding problem in this director's work.

As for characters, there's a village idiot (hammed up by Adrien Brody) who loves a blind girl (Bryce Dallas Howard) who loves a silent brooding boy (Joaquin Phoenix) who spurns the blind girl's freespirited sister (Judy Greer) who winds up with a fellow who won't sit back in a chair lest his shirt get wrinkled. The girls have the better of it: the Misses Greer and Howard are full of period charm., and when something happens to someone and Miss Howard (daughter of director and former child star Ron Howard) is forced to trek through the forest to 'the towns' the film seems at last to have found a character worth getting to know. Alas, our interest is unrewarded, and the final twist is not just obvious but a lousy cheat.

The creatures are known as Those We Do Not Speak Of, and at the edge of the village is The Shed We Do Not Use. Even though the picture's atmosphere is freighted with stately self-importance, I wasn't the only customer to feel this is The Film We Do Not Find It Easy To Suppress Our Giggles At. This director is a young dog who needs some new tricks.