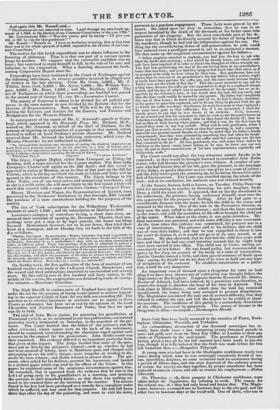 Page 5, 21 December 1833 — The High Sheriffs in various parts of England have opened
Close

The High Sheriffs in various parts of England have opened

Courts under the act for the purpose of trying issues joined in actions depend- ing in the superior Courts of Law, for any debt not exceeding 20/. The question as to whether barristers or attornies are to appear in these Courts as advocates, has been set at rest by the opinion of the Lord Chancellor and Justices Bosanquet and Parke, that they are open equ ally to both.

The trial of John Bode junior, for poisoning his .grandfather, at Plumstead (which, as we mentioned in our last publication, commenced yesterday week), terminated on Saturday, in the acquittal of the pri- soner. The Court decided that the father of the prisoner, and the other witnesses whose names were on the back of the indictment, should be examined, notwithstanding the objections urged against such a course by the counsel for the prosecution. John Bodle senior was then examined. His evidence differed in no important particular from that given at the inquest. The Judge decided that some of the ques- tions put to him by the prisoner's counsel—such as, whether he had not been accused of felony, been in Maidstone gaol, and charged with attempting to cut his wife's throat—were irregular, as tending to dis- credit his own witness ; and Bodle refused to answer them. The pri- soner, when asked for his defence, asserted his innocence, and handed in a written paper which-was read by the officer of the Court. In this paper, be explained some of the suspicious circumstances against him. He remarked, that it appeared from the evidence that he was in the balit of going early to his grandfather's in a morning, and assisting the servants in their household duties ; so that there was nothing un- usual in his conduct there on the morning of the murder. The arsenic found in his box had been purchased as a remedy for a complaint under which he suffered, and was used for that purpose. He had left home three days after the day of the poisoning, and went to visit his sister, pursuant to a previous engagement. These facts were proved by wit- nesses. He called upon the Jury to remember, that he was in no respect benefited by the death of the deceased, as his father came into possession of the property. Btit the most remarkable part of his de- fence was that in which he directly accused his father of being himself the murderer, though he had laid the information against his son. No- thing but the overwhelming desire of self-preservation, he said, could have induced even a profligate parent to act in so unnatural a manner. He thus sums up the suspicious circumstances against his father- " Before suspicion attached to anybody, you find him the first to ask who filled the kettle that morning ; a fact which he already knew, and which could only have been inquired of in order to direct the thoughts of others towards me. You find him proclaiming the fact of his not having been at may grandfather's house that morning; and you find him lying in bed much later than usual, as if on purpose to be ready to show where he then was. But, gentlemen, how is it shown that he was not at my grandfather's the day beforC, when arsenic might so easily have been put into the coffee-jar, and the more easily because Sophia Taylor was out the whole of that day? This idea never occurred to any one for a long time, because the coffee-jar was supposed to be kept in a cupboard always locked, and the key of which was in possession of the deceased; but on an in- spection by the Coroner's Jury, it was found that the lock did not catch, and that the door could readily, be opened by'any person. My father had completely the run of that house ; he knew every part of it ; he had it clearly, therefore, in his power' to open that cupboard, and to do any thing he pleased with the jar in which the coffee was kept. Gentlemen, he must have gone to that cupboard; he must have gone to that coffee-jar; for, if I am permitted, I shall dis- tinctly prove to you that he was aware of its contents. First, however, let me remind you that his statement is, that he went to the deceased's house on Saturday evening about six o'clock ; that be then found the family ill ; that he had no idea of their having taken poison; - and that it was for the first time he learned they were in any way unwell. What will be said, gentlemen, when I show you that as early as ten o'clock on that fatal morning, he had a conversa- tion with two persons named Jacobs, to whom he stated-that his father's family was poisoned ; that they were poisoned by something they load taken for break- fast, but that it was not the coffee, for the coffee used that morning was the last that remained in the jar? All this, gentlemen, was said many hours before he had been to the house—many hours before, as he says, he kuew any one was even ill, and in direct contradiction of his own representations, repeatedly and deliberately made." The Court would not allow the two witnesses named Jacobs to be examined; as they would be brought forward to contradict John Bodle senior, who had become the prisoner's own witness. A number of per- sons who had known him all his life, gave the prisoner, in the language of the Judge, as good a character as ever was given in a court of justice ; and the Jury interrupted the summing up, by declaring themselves satis- fied of his innocence. The Court was crowded during the whole of the trial ; and at its conclusion, the audience rose and cheered heartily.

A t the Sussex Assizes, held at Lewes, on Tuesday, Philip Demi was tried for attempting to murder, by drowning, his own daughter, Sarah. Dean, a child six years old. It appeared, that on the day mentioned in the indictment, the prisoner, having undressed himself, went into the sea, apparently for the purpose of bathing. After he had gone to a considerable distance into the water, he left the child in the water, and returned to the shore. Or.e of the men in the Preventive Service, on duty near the spot, called to the prisoner; then the latter returned to the water, and with the assistance of the officer brought the child out of the water. When taken to the shore, it was quite senseless. Me- dical assistance was procured, and with some difficulty it was recovered. At the time when this violence was committed, the prisoner was in a state of intoxication. The prisoner said in his defence, that the child was of very dirty habits; and that he was compelled to throw it into the water to cleanse it, as it would not go in of its own accord, or at his desire. He also observed, that he had bad the child five years with him, and that if he had any cruel intention towards her, he might long since have carried it into effect. The child was in Court, smiling un- consciously at her father. He was found guilty, but recommended to mercy by the Jury, on account of his being in a state of intoxication. Justice Gaselee paused a little, and then passed sentence of death upon him ; saying, he should not do his duty if he were to hold out any hope of mitigation of the sentence. To establish intoxication as a pallia- tion, would be very dangerous.

An important case of demand upon a clergyman for rates on land alleged to have been thrown out of cultivation was brought before the Magistrates at Buckingham. It appears that the Reverend Mr. Baines, Rector of Adstock, had been induced, by a pecuniary consideration, to permit his tenant to abandon the lease of his farm in Adstock. This took place at Michaelmas; since which time the land has remained uncultivated, the Louse being only occupied to prevent dilapidation. The Magistrates considered the case one of so much difficulty, that they refused to enforce the rate, and left the dispute to be settled at Quar- ter-sessions. The condition of this parish is a melancholy illustration of the effects produced by pauperism. The source of income to the clergyman is almost nestroyed.—Northampton Herald.