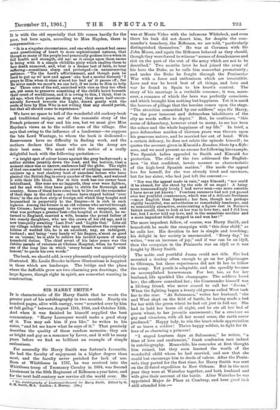 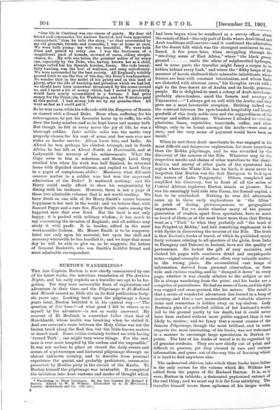 SIR HARRY SMITH.* IT is characteristic of Sir Harry Smith

that he wrote the greater part of his autobiography in two months. Nearly six hundred pages, alive with energy, were "scrawled over by him at full gallop" between August 11th, 1844, and October 15th. And when it was finished he himself supplied the best commentary. "Harry Lorrequer would make a good story of it. You may ask him if you like," he writes to his sister, "and let me know what he says of it." That precisely describes the quality of these random memoirs; they are as bright and gay as a romance by Lever, and it will be many years before we find so brilliant an example of simple enthusiasm.

For assuredly Sir Harry Smith was fortune's favourite. He had the faculty of enjoyment in a higher degree than most, and the faculty never perished for lack of use. Born at Whittlesea in 1787, he was received into the Whittlesea troop of Yeomanry Cavalry in 1804, was Second Lieutenant in the 95th Regiment of Riflemen a year later, and for the next half-century saw service all the world over. He • The Autobiography of Lieutenant-General Sir Harry Smith. Edited by G. C. N. Smith, M.A. London: J. Murray. [Sta.]

was at Monte Video with the infamous Whitelock, and even there his luck did not desert him, for despite the com- mander's treachery, the Riflemen, we are told, "particularly distinguished themselves." He was at Corunna with Sir John Moore, and again the Riflemen behaved as they should, though they were forced to witness" scenes of drunkenness and riot on the part of the rest of the army which are not to be described." Two months later he had joined the army of his hero the Duke, as he calls him somewhat prematurely; and under the Duke he fought through the Peninsular War with a force and enthusiasm which are irresistible.

Love and war he loved best of all things, and love and war he found in Spain to his heart's content. The story of his marriage is a veritable romance; it was, more- over, a romance of which the hero was perfectly conscious, and which brought him nothing but happiness. Yet it is amid the horrors of pillage that the heroine comes upon the stage.

"The atrocities committed by our soldiers," says Sir Harry, "on the poor innocent and defenceless inhabitants of the

city no words suffice to depict." But, he continues, "this scene of debauchery, however cruel to many, to me has been the solace and the whole happiness of my life." In brief, a poor defenceless maiden of thirteen years was thrown upon

his generous nature, and he married her out of hand. With a certain delicacy, he does not relate the episode himself; he quotes the account given in Kincaid's Random Shots by a Rifle- man, and we need present no excuse for following his example. Two Spanish ladies appealed to Smith and Kincaid. for protection. The elder of the two addressed the English- men "in that confident, heroic manner so characteristic of the high-bred Spanish maiden." She made the appeal less for herself, for she was already tired and careworn, but for her sister, who had just left the convent:—

" Nor was the appeal made in vain," says Kincaid ; " nor could it be abused, for she stood by the side of an angel ! A. being more transcondingly lovely I had never seen—one more amiable I have never yet known ! Fourteen summers had not yet passed over her youthful countenance, which was of a delicate freshness —more English than Spanish ; her face, though not perhaps rigidly beautiful, was nevertheless so remarkably handsome, and so irresistibly attractive, surmounting a figure cast in Nature's fairest mould, that to look at her was to love her; and I did love her, but I never told my love, and in the meantime another and a more impudent fellow stepped in and won her ! "

The more impudent fellow, of course, was Harry Smith, and henceforth he made the campaign with "this dear child," as

he calls her. His devotion to her is simple and touching; his delight in her society is unconcealed. "Every day," he writes, "was an increase of joy," and if war can be an idyll, then the campaign in the Peninsula was an idyll as it was fought by Harry Smith.

The noble and youthful Juana could not ride. She had mounted a donkey often enough to go on her pilgrimages to Olivenca, but these experiences did not fit her to follow the army. Yet youth is adaptable, and she speedily became an accomplished horsewoman. For her, too, as for her husband, life sparkled like champagne. The soldiers loved her; the officers consulted her; the Commander himself was

a lifelong friend, who never ceased to call her "Juana." When the fighting began a trusty old groom called West took

her to the rear. "At Salamanca," writes her husband, "she and West slept on the field of battle, he having made a bed

for her with the green wheat he had cut just in full ear. She had to hold her horse all night, and he ate all her bed of green wheat, to her juvenile amusement ; for a creature so gay and vivacious, with all her sound sense, the earth never produced." Happy lady, to win the heart-whole appreciation of so brave a soldier! Thrice happy soldier, to fight for th love of so charming a princess!

"I stayed fourteen days at Salamanca," he writes, "a time of love and excitement," frank confession rare indeed in autobiography. Meanwhile, his comrades at first thought him ruined, but they soon learned the worth of the wonderful child whom he had married, and saw that she could but encourage him to deeds of valour. After the Penin- sula', they parted for the first time, for Harry Smith was sent on the ill-fated expedition to New Orleans. But in the next year they were at Waterloo together, and both husband and wife give their account of the battle. After Waterloo be was appointed Major de Place at Cambray, and here good luck still attended him "Our life in Cambray was one excess of gaiety. My dear old friend and commander, Sir Andrew Barnard, had been appointed commandant," thus he tells the story, "so that surrounded by my old generals, friends, and comrades, I was at home at once. We were both young: my wife was beautiful. We were both feted and petted by every one. I was the huntsman of a magnificent pack of hounds, steward of races, riding steeple- chases, &c. My wife was taken the greatest notice of by every one, especially by the Duke, who, having known her as a child, always called her his Spanish heroine, Juana. She rode beauti- fully hunting, was the best of waltzers, and sung melodiously. We were surrounded by the best society. All England's nobility poured forth to see the lion of the day, the Duke's headquarters. No wonder that in the midst of his gaiety and in this land of plenty, after the life of hardship and privation which we had led, we should have been somewhat intoxicated by the scene around 'us, and I spent a lot of money which, had I saved it prudently, would have nearly accumulated to a fortune. I had prize money for the Peninsula, for Washington, and for Waterloo paid at this period. I had money left me by my grandmother. All went as fast as I could get it."

So he won races, while his wife rode with the Emperor of Russia or danced with a Grand Duke. Even when, suffering for his extravagance, he put his favourite horse up to raffle, his wife drew the lucky number, and so he kept horse and money both. But though he felt at every nerve the joy of life, he was a thorough soldier. Inter milites miles was the motto very properly chosen for his coat of arms, and few men ever saw wider or harder service. Africa knew him, and India. At

_Aliwal- he• won perhaps his chiefest triumph, and in South Africa he has left at Aliwal North, at Harrismith, and at Ladysmith the memory of his achievements. What the Cape owes to him is notorious, and though Lord Grey rebelled him when his work was half finished, he returned home -with dignified cheerfulness, and replied to Lord Grey

in a paper of conspicuous ability. Moreover, what did such censure matter to a soldier who had won the expressed admiration of the Duke? It mattered nothing; and Sir Harry could easily afford to stow his magnanimity by dining with his traducer. However, there is not a page of these two admirable volumes that is not worth reading. We have dwelt on one side of Sir Harry Smith's career because happiness is too rare in the world; and we believe that, with Samuel Pepys and a rare few, Harry Smith ranks among the happiest men that ever lived. But the book is not only happy ; it is packed with military wisdom; it has much to say concerning the invasion of England; and all soldiers may study it with profit. It is, besides, edited in the most workmanlike fashion. Mr. Moore Smith is to be congratu- ]ated not only upon his material, but upon the skill and accuracy wherewith he has handled it; and we hope that some day he will be able to give us, as he suggests, the letters of General Beckwith, who was Smith's faithful friend and most admirable correspondent.