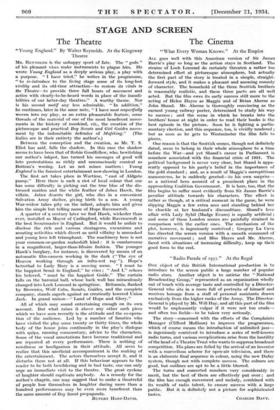 "What Every Woman Knows." At the Empire ALL goes well with this American version of Sir James Barrie's play so long as the action stays in Scotland. The strains of Loch Lomond do certainly threaten a rather too determined effort at picturesque atmosphere, but actually the first part of the story is treated in a simple, straight- forward style, and it makes a pleasant and amusing comedy of character. The household of the three Scottish brothers is reasonably realistic, and these three parts are all well acted. But the film owes its early success still more to the acting of Helen Hayes as Maggie and of Brian Aherne as John Shand. Mr. Aherne is thoroughly convincing as the earnest young railway porter, determined to study his way to success ; and the scene in which he breaks into the brothers' house at night in order to read their books is the best episode in the picture. Soon he is fighting a parlia- mentary election, and this sequence, too, is vividly rendered ; but as soon as he gets to Westminster the film falls to pieces.

One reason is that the Scottish scenes, though not definitely dated, seem to belong in their whole atmosphere to a time before the War—and yet Shand's career in Parliament is somehow associated with the financial crisis of 1931. The political background is never very clear, but Shand is appa- rently opposed to his party's belief in the importance of the gold standard ; and, as a result of Maggie's surreptitious manoeuvres, he is suddenly greeted—to his own surprise— as a national hero assured of a prominent place in the approaching Coalition Government. It is here, too, that the film begins to suffer most evidently from Sir James Barrie's peculiar attitude towards his characters. The effect is rather as though, at 'a critical moment in the game, he were slipping Maggie a few extra aces and standing behind her to chuckle at her husband's discomfiture. Shand's love affair with Lady Sybil (Madge Evans) is equally artificial ; and some of these London scenes are painfully strained in comparison with the earlier ones. The mechanism of the plot, however, is ingeniously contrived ; Gregory La Cava has directed the screen version with a smooth command{ of narrative movement ; and Miss Hayes and Mr. Aherne, faced with situations of increasing difficulty, keep up their good form to the end.