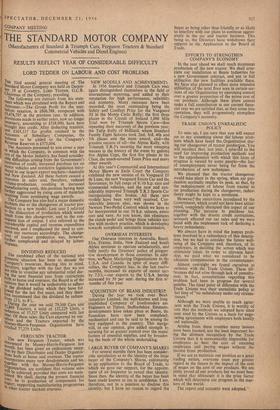 (Manufacturers of Standard & Triumph Cars, Ferguson Tractors & Standard Commercial Vehicles and Diesel Engines) RESULTS REFLECT YEAR OF CONSIDERABLE DIFFICULTY LORD TEDDER ON LABOUR AND COST PROBLEMS The 53rd annual general meeting of The Standard Motor Company was held on Decem- Der 19 at Coventry, LORD TEDDER, G.C.B.. Chairman of the Company, presiding. The following are extracts from his state- 'tent which was circulated with the Report and Accounts ; —The Group Profit for the year, before taxation, is £806,788, compared with 0,474,797 in the previous year. In addition, Provisions made in earlier years, now no longer ,1ecessary, amounting to £518,000, have been Drought into credit. After deducting taxation, and £105,117 for profits retained in the Accounts of Subsidiary Companies, the balance to be added to the Company's Revenue Reserves is £573,004. The Accounts presented to you cover a year 'n which the Company, in common with the rest of the Motor Industry, has faced consider- able difficulties arising from the Government's limitation of credit, increased purchase tax on Tutor vehicles and restrictive legislation intro- 'weed in our largest export markets—Australia and New Zealand. All these factors caused a recession in sales and, therefore, reduced \'°111me-production, resulting in increased tnanufacturing costs, thissposition having been further aggravated by rising costs of materials resulting from continuing wage awards. The Company has also had a major domestic .I;roblem due to the changeover of tractor pro- duction to a new model. Last year I referred

the dislocation of production which would result from this changeover, and to the con- sequent loss of output. I also referred to the Fonsiderable capital and revenue expenditure involved, and I emphasised the need to con- serve our resources accordingly. The change- rer of tractor production was, however, eraser complicated and delayed by labour disPutes,

, The combined effect of the national and .,101nestic situation has been to denude the therefore resources. Bearing this in mind. 'erefore, together with the fact that we are not able to visualise any substantial relief dur- It1:11 the next financial year from restricons both at home and overseas, the Board is of the °Pillion that it would be undesirable to adhere !0 the dividend policy which they have fol 1,0Wed for the last five years, and they there fore recommend that the dividend be reduce( 'rem 12% to 8%. snburing the year we sold 79,360 Cars and r4,869 Tractors, a total of 132,229 Units, a veduction of 37,327 Units compared with last seep. Of these sales, the Cars exported by our selves and the Tractors exported by the 1,,asseY-Harris-Ferguson Organization have '‘alled 77,279 Units.

The new Ferguson Tractor, which was announced by Massey-Harris-Ferguson last irut,11, has been given' an enthusiastic recep- ,.'n ng their Distributor and Dealer Organize- ;Ions oth at home and overseas. The tractor ,nicorporates many new developments and we, together with the Massey-Harris-Ferguson rganization, are confident that volume sales will be achieved, provided that costs are main- tained. We shall, during the present financial Year, be in production of components for export, supporting manufacturing programmes

other tractor markets overseas. NEW MODELS AND ACHIEVEMENTS In 1956 Standard and Triumph Cars once again diqinguished themselves in the field of international motoring, and added to their reputation for high performance, reliability and economy. Many successes have been recorded, the most outstanding being the Safety and Comfort Prize for the Vanguard 111 in the Monte Carlo Rally; the first three places in the Circuit of Ireland 1,000 Mile Trial won by Triumph Sports Cars—thus repeating their successes of the previous year; the Tulip Rally of Holland, where Standard Family Eight Saloons took 2nd, 3rd, 4th and 5th places and the team award, and—the greatest success of all—the Alpine Rally, with Triumph T.R.3's securing the most sweeping success in the history of the event by gaining five Alpine Cups, the first five places in the Class, the much-coveted Team Prize and many other awards.

At this year's Commercial and International Motor Shows at Earls Court the Company exhibited the new version of its Vanguard 111 de Luxe; the new Vanguard Estate Car and the Sportsman; its full range of 8/10 h.p. cars and commercial vehicles, and the new and con- siderably improved Triumph T.R.3 Sports Car incorporating disc brakes. All these new models have been very well received. Con- siderable interest also, was shown in the Newton Two-Pedal Control which we have so far incorporated in our 10 h.p. saloons, estate cars and vans, As you know, this eliminates the clutch pedal and brings those vehicles into line with modern practice, which is developing towards completely automatic transmission.

Our Overseas interests in Australia, Brazil. Eire, France, India, New Zealand and South Africa continue to operate satisfactorily, and fullyjustify the Directors' policy of progres- sive development in those countries. In addi- tion, wehave Marketing Organizations in the U.S.A. and Canada. In spite of many diffi- culties, the Company has, in the last twelve months, increased its exports of motor cars by 7.3%—our exports to the U.S.A. having increased by 50 per cent. during the first si• months of this year.

ACQUISITION OF BEANS INDUSTRIM. During the year we took over Bean industries Limited, the well-known and long established Company of Ironfounders am Engineers at Tipton, Staffordshire. Extensive developments have taken place at Beans, the Foundries have now been completely mechanized and can be said to be among the best equipped in the country. This merger will, in our opinion, give added strength by securing for us greater control over the manu facture of essential supplies, and by broaden ing the basis of the whole undertaking.

For several months there has been consider• able speculation as to the identity of the large buyer of the Company's Shares, culminating in an application to the Board of Trade, to which we gave our support, for the appoint- ment of an Inspector to reveal, that identity. Since then, the identity of the buyer has been been made known to me in confidence. I am, therefore, not in a position to disclose this identity, but I have no reason to regard the

buyer as being other than friendly or as likely to interfere with our plans to continue aggres- sively in the car and tractor business. This being so, the Directors have withdrawn their support to the Application to the Board of Trade.

EFFORTS TO STRENGTHEN COMPANY'S ECONOMY In the year ahead we shall reach maximum production of the new tractor. We shall com- plete our installation at Beans Industries for a new Government contract, and put to full utilisation the new facilities available there. We have also planned to effect more intensive utilisation of the total floor area in certain sec- tions of our Organization by exercising control over a greater proportion of the prime cost of our products. Although these plans cannot make a full contribution in our current finan- cial year we are satisfied that, as they come into operation, they will progressively strengthen the Company's economy.

TRADE UNION'S UNREALISTIC • POLICY To sum up, I am sure that you will expect

me to say something about the labour prob- lems which have faced the. Organization dur- ing our changeover of tractor production. You will recollect that, last year, I referred to the need for improving production methods and to the apprehension with which this form of i progress is viewed by some people—the fear of unemployment never being far from the introduction of new techniques.

We planned that the tractor changeover

would take place in the spring, when car pro- duction normally reaches its peak, so that, by the redeployment of labour from tractor to car production during the changeover, redun-. dancy might be kept to a minimum.

However!. the restrictions introduced by the Government, which could not have been antici- pated, completely. disrupted this aspect of our planning. The increase in purchase tax, together with the drastic credit restrictions, seriously affected our car sales and we were faced with the unpleasant task of declaring a heavy redundancy.

We always have in mind the human prob-

lems involved in a redundancy of this descrip- tion, but we had to consider the future well- being of the Company and, therefore, of its employees, in deciding the action which was ultimately taken. In order to alleviate hard- ship, we paid what we considered to be adequate compensation in the circumstances.

Almost overnight we found ourselves at variance with the Trade Unions. These dif- ferences did not arise through lack of consulta- tion; in fact, consultations regarding this problem had been in progress for several months. The focal point of difference with the Trade Unions was their unrealistic policy at hat time of "no redundancy under any circum- lances."

Although we were unable to reach agree-

nent with the Trade Unions, it is worthy of cote that the methods we adopted have since been used by the Unions as a basis for nego- ,iating agreements with employers both locally ind nationally.

Arising from these troubles many lessons have been learned, not the least important be- ing the ultimate recognition by the Trade Unions that it is economically impossible for employers to bear the cost of retaining employees and paying wages without the income from production.

If we are to maintain our position as a great

trading nation, everyone must pay greater regard in the future to the impact of the cost of wages on the cost of our products. We are iustly proud of our products but we must bear in mind that ultimately it is the price factor which will determine our progress in the mar- kets of the world.

The report and accounts were adopted,