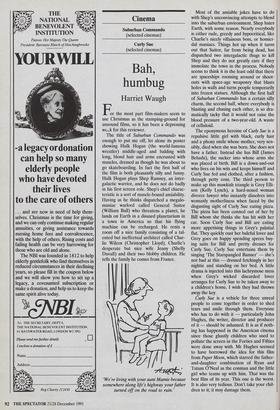 For the most part film-makers seem to use Christmas as the stamping-ground for unsound films, so it has been a depressing wc,,k for this reviewer.

The title of Suburban Commando was enough to put me off, let alone its poster showing Hulk Hogan (the world-famous wrestler) middle-aged and balding with long, blond hair and arms encrusted with muscles, dressed as though he was about to go skateboarding. In fact the first half of the film is both pleasantly silly and funny. Hulk Hogan plays Shep Ramsey, an inter- galactic warrior, and he does not do badly in his first screen role. Shep's chief charac- teristic is a sort of muscle-bound amiability. Having as he thinks dispatched a megalo- maniac warlord called General Suitor (William Ball) who threatens a planet, he lands on Earth in a disused planetarium in a town in America so that his flying machine can be recharged. He rents a room off a nice family consisting of a tal- ented but ineffectual architect called Char- lie Wilcox (Christopher Lloyd), Charlie's desperate but nice wife Jenny (Shelly Duvall) and their two blobby children. He tells the family he comes from France.

`We're living with your aunt Mamie because somewhere along life's highway your father turned off on the road to ruin.' Most of the amiable jokes have to do with Shep's unconvincing attempts to blend into the suburban environment. Shep hates Earth, with some reason. Nearly everybody is either rude, greedy and hypocritical, like Charlie's nicely villainous boss, or homici- dal maniacs. Things hot up when it turns out that Suitor, far from being dead, has dispatched two intergalactic thugs to kill Shep and they do not greatly care if they immolate the town in the process. Nobody seems to think it in the least odd that there are spaceships zooming around or shoot- outs with space-age weaponry that blasts holes in walls and turns people temporarily into frozen statues. Although the first half of Suburban Commando has a certain silly charm, the second half, where everybody is blasting and chasing each other, is so dra- matically tacky that it would not raise the blood pressure of a two-year-old. A waste of celluloid.

The eponymous heroine of Curly Sue is a repulsive little girl with black, curly hair and a phony smile whose mother, very sen- sibly, died when she was born. She does not have a father. Instead she has Bill (James Belushi), the sucker into whose arms she was placed at birth. Bill is a down-and-out who lives on his wits and keeps himself and Curly Sue fed and clothed, after a fashion, through petty cons. The third person to make up this mawkish triangle is Grey Elli- son (Kelly Lynch), a hard-nosed woman divorce lawyer who instantly dissolves into womanly motherliness when faced by the disgusting sight of Curly Sue eating pizza. The pizza has been conned out of her by Bill whom she thinks she has hit with her car. Soon Curly Sue and Bill are eating more appetising things in Grey's palatial flat. They quickly oust her baleful lover and Grey goes on happy spending sprees buy- ing suits for Bill and pretty dresses for Curly Sue. Curly Sue entertains them by singing 'The Starspangled Banner' — she's not bad at this — dressed fetchingly in her nightie and standing on her bed. A little drama is injected into this lachrymose mess when Grey's wicked discarded lover arranges for Curly Sue to be taken away to a children's home. I wish they had thrown away the key. curly Sue is a vehicle for three unreal people to come together in order to shed tears and smile through them. Everyone who has to do with it — particularly John Hughes, the writer, director and producer of it — should be ashamed. It is as if noth- ing has happened in the American cinema since those ghastly children who used to pollute the screen in the Forties and Fifties were done away with. Mr Hughes seemed to have borrowed the idea for this film from Paper Moon, which starred the father- and-daughter combination of Ryan and Tatum O'Neal as the conman and the little girl who teams up with him. That was the best film of its year. This one is the worst. It is also very tedious. Don't take your chil- dren to it; it may damage them.