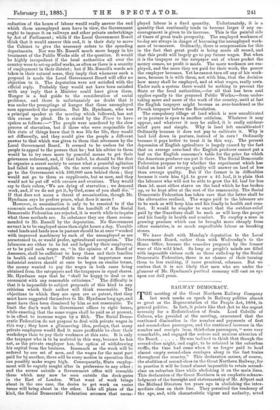 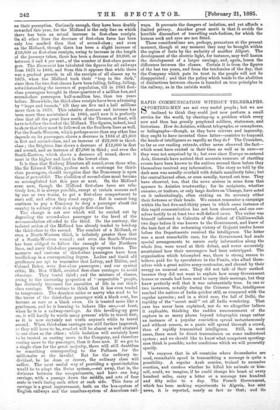 THE meeting of the Great Northern Railway Company last week marks an epoch in Railway politics almost as great as the Representation of the People Act, 1884, in general politics. In fact, it points like that Act to the urgent

necessity for a Redistribution of Seats. Lord Colville of Culross, who presided at the meeting, announced that the continued diminution in the number and payments of first and second-class passengers, and the continued increase in the number and receipts from third-class passengers, " were very remarkable, and engaged the serious and anxious attention of

the Board He was inclined to think that though the second-class might, and ought, to be retained in the suburban traffic, the time had come when it no longer paid to haul almost empty second-class carriages along in the fast trains throughout the country." This declaration means, of course, the abolition of second-class on the Great Northern Railway, for in practice it will be found almost impossible to retain secondclass on suburban lines while abolishing it on the main lines. This declaration of the Great Northern is an emphatic acknowledgment of the foresight and statesmanship of Mr. Allpert and the Midland Directors ten years ago in abolishing the intermediate class on their line. They perceived the tendency of the age, and, with characteristic vigour and audacity, acted on their perception. Curiously enough, they have been doubly rewarded this year, for the Midland is the only line on which there has been an actual increase in first-class receipts. On all other lines the decrease of first-class fares has been only less marked than that of second-class ; and even on the Midland, though there has been a slight increase of £10,000 on first-class receipts, owing to increase in the length of the journeys taken, there has been a decrease of 30,000, or between 3 and 4 per cent., of the number of first-class passengers. The Economist has tabulated the figures for all railways from 1873 to 1883, and from this it appears that while there was a gradual growth in all the receipts of all classes up to 1875, when the Midland took their " leap in the dark," since then the two first classes have been falling, falling, falling, notwithstanding the increase of population, till in 1883 firstclass passengers brought in three-quarters of a million less, and second-class passengers half-a-million less, than ten years before. Meanwhile, the third-class receipts have been advancing

• by "leaps and bounds," till they are five and a half millions more than in 1873. This relative decrease and increase has been more than maintained in 1884, until now it is perfectly clear that all the great lines north of the Thames, at least, will have to fellow the lead of the Midland. The figures, indeed, tend to show that they must be followed on the Southern lines as well. For the South-Western, which perhaps more than any other line depends on its passengers, shows a decrease in 1884 of £1,600 in first and second-class, and an increase of £22,000 in thirdclass ; the Brighton line shows a decrease of £12,000 in first and second, and an increase of £7,000 in third ; and even the South-Eastern, which shows a decrease all round, shows it most in the higher and least in the lowest class.

It is time that Railway Directors all round, even those who, like Sir Edward Watkin, profess such a contempt for thirdclass passengers, should recognise that the Democracy is upon them et prn'valebit. The abolition of second-class must become an accomplished fact this year or next. On the Midland even now, though the Midland first-class fares are relatively low, it is always possible, except at certain seasons and by one or two trains, to get a first-class compartment to one's self, and often they stand empty. But it cannot long continue to pay a Company to drag a passenger about the country in solitary state at a simple first-class fare.

The change is not one which will be carried out by degrading the second-class passenger to the level of the accommodation afforded to the third. On the contrary, the isolated action of the Midland has already tended to level-up the third-class to the second. The comfort of a Midland, or even a North-Western third, is infinitely greater than that of a South-Western second ; and even the South-Western has been obliged to follow the example of the Northern lines, and carry third-class passengers by express trains. The manners and customs of third-class passengers have been levelled-up in a corresponding degree. Ladies and timid old gentlemen are apt to remember that Lefroy, and Muller, and

• Colonel Baker, were first-class passengers ; and our cynical critic, Mr. Max O'Rell, avoided first-class carriages to avoid chantage. They travel third ; and the mixture of classes, owing to the increasing proportion of " respectable " people, has distinctly increased the amenities of life in our thirdclass carriage. We venture to think that it has even tended to temperance. The drunken sailor or navvy who used to be the terror of the third-class passenger with a black coat, has become as rare as a black swan. He is treated more like a gentleman, and he is learning to behave like one,—at least, when he is in a railway-carriage. As this levelling-up goes on, it will hardly be worth many persons' while to travel first, as it is now certainly not worth anyone's while to travel second. When third-class carriages are still further improved, al they will have to be, comfort will be almost as well attained in one class as the other ; while isolation will certainly have to be treated as costing more to the Company, and therefore costing more to the passenger, than it does now. If we get to a single class for the great majority, there will still doubtless be something corresponding to the Pullman for the millionaire or the invalid. But for the ordinary individual, be he dean or drover, the ordinary class will

• suffice. The most useful way of providing a quasi-isolation would be to adopt the Swiss system,—cut away, that is, the divisions between the compartments, and have one long carriage, with a passage down the middle, and sets of four seats in two's facing each other at each side. This form of carriage is a great improvement, both on the box-system of English railways and the omnibus-system of American rail ways. It prevents the dangers of isolation, and yet affords a limited privacy. Another great merit is that it avoids the horrible discomfort of travelling crab-fashion, for which the human neck and eyes are not fitted.

These considerations are, perhaps, premature at the present moment, though at any moment they may be brought within the region of facts by the audacity of another Allport. The development of the electric light, for instance, may well hasten the development of a larger carriage, and, again, lessen the difference between the classes. Certain it is from the figures of the last ten years, and from the tendencies of the day, that the Company which puts its trust in the people will not be disappointed ; and that the policy which tends to the abolition of distinctions between classes is founded on true principles in the railway, as in the outside world.