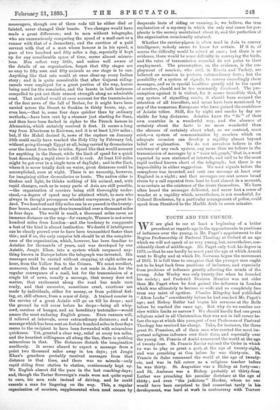 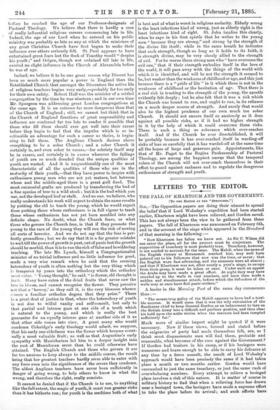 YOUTH AND THE CHURCH.

WE are glad to see at least a beginning of a better precedent as regards age in the appointments to positions of influence over the young, in Mr. Paget's appointment to the Regius Professorship of Pastoral Theology at Oxford at an age which we will not speak of as very young, but, nevertheless, considerably short of middle-age. Mr. Paget only took his degree in 1873, so that he can hardly be much past the age at which Arnold went to Rugby and at which Dr. Newman began the movement of 1833. It is full time to recognise that the younger men ought not to be kept back from positions of influence, and especially from positions of influence greatly affecting the minds of the young. John Wesley was only twenty-five when he founded his society ; and Frederick Denison Maurice was not older than Mr. Paget when he first gained the influence in London which was ultimately to become so wide and so completely free from any taint of egotism. Charles Kingsley had published " Alton Locke" considerably before he had reached Mr. Paget's age ; and Bishop Butler had begun his sermons at the Rolls before he reached the same age. But why do we confine our view within limits so narrow P We should hardly find one great religious mind in all Christendom that was not in full career before the age at which this youngest of our Professors of Pastoral Theology has received his charge. Take, for instance, the three great St. Francises, all of them men who exerted the most important religions influence over their time, and especially over the young. St. Francis of Assisi renounced the world at the age of twenty-four. St. Francis Xavier entered the Order in which he was to play so great a part, at the age of twenty-eight, and was preaching at Goa before he was thirty-six. St. Francis de Sales renounced the world at the age of twenty-six, and was in full career as a religious teacher before he was thirty. St. Augustine was a Bishop at forty-one ; and St. Ambrose was a Bishop probably at thirty-four. Luther was preaching his peculiar doctrines at the age of thirty ; and even "the judicious" Hooker, whom no one would have been surprised to find somewhat tardy in his development, was hard at work in controversy with Travers

before ho reached the age of our Professor-designate of Pastoral Theology. We believe that there is hardly a case of really influential religious careers commencing late in life. Indeed, the age of our Lord when he entered on his public ministry was probably as late as any at which the ministers of any great Christian Church have first begun to make their influence over others seriously felt. St. Paul appears to have entertained great fears lest the flock of Timothy would " despise his youth ;" and Origen, though not ordained till late in life, exerted no slight influence in the Church of Alexandria before ho was of age.

Indeed, we believe it to be one great reason why Dissent has been so much more popular a power in England than the Established Church that amongst the Dissenters the active life of religions teachers begins very early,—probably far too early for their own safety. Robert Hall was the minister of a settled congregation by the time he was nineteen ; and in our own time Mr. Spurgeon was addressing great London congregations at the same age. It is an extreme far more dangerous than that of the Church of England ; still, we cannot but think that in the Church of England functions of great responsibility and influence are conferred far too late to render it possible that those who fill them should ever get well into their career before they begin to feel that the impulse which is so inestimable an advantage for such a career as theirs, is beginning to fail them. The Anglican Church desires above everything to be a sober Church ; and a sober Church it certainly is, and even sober to excess,—for sobriety itself may be in excess, and certainly is in excess wherever the failings of youth are so much dreaded that the unique qualities of youth are wasted. And it is unquestionably one of the most characteristic of all the qualities of those who are in the maturity of their youth,—that they have power to inspire with enthusiasm young men who are not yet mature, but between whom and the middle-aged there is a great gulf fixed. The most successful grafts are produced by transferring the bud of a fine species of tree to a wild stock ; but it is the bud which you use, not the developed leaf or stalk. And no one, we believe, who really understands his work will expect to obtain the same results by putting the old to teach the young, which he would expect from putting those whose enthusiasm is in full vigour to teach those whose enthusiasm has not yet been moulded into any definite shape. No doubt, what the Church fears, or what those who govern the Church fear, is that if they promote the young to the care of the young they will run the risk of sowing all sorts of heresies. And we do not say that the fear is perfeotly groundless ; but we do say that it is a far greater mistake to wait till the power of growth is past, out of panic lest the growth should be morbid, than it is to run the risk of false and bewildering teaching. The late Mr. Lynch, himself a Congregationalist minister of no trivial influence and no little influence for good, made a very wise remark when he said that the seeming heterodoxy of youth is often nothing but the very thing which tempered by years into the orthodoxy which the orthodox most value. '• Young thought," he said, " is flower, old thought is fruit. Many have eaten of the dried fruits that never saw the tree in bloom, and cannot recognise the flower. They perceive not that a heresy,' as they call it, is the very blossom whence comes a familiar orthodox dogma that they prize." There is a great deal of justice in that, where the heterodoxy of youth is not due to wilful vanity and self-conceit, but only to that partial and intense gaze at one side of a truth which is natural to the young, and which is really the best guarantee for an equally intense gaze at another side of it as that other side comes into view. A great many who would condemn Coleridge's early theology would admit, we suppose, that his early one-sidedness was the flower which became eventually a most valuable fruit; as well as that Augustine's early sympathy with Manichmism led him to a deeper insight into the root of Manichtean error than he could otherwise have attained. The English Church and those who govern it are far too anxious to keep always to the middle course, the result being that her greatest teachers hardly seem able to enter with any force even into the significance of the errors they condemn. The ablest Anglican teachers have never been sufficiently in danger of going wrong, to help others to know in what the wrong, and therefore the right, really consists.

It cannot be denied that if the Church is to use, to anything like the fall extent, the magic of youth, it mast run greater risks than it has hitherto ran; for youth is the seedtime both of what is best and of what is worst in religions audacity. Elderly wrong is the least infections kind of wrong, just as elderly right is the least infectious kind of right. St. John implies this clearly, when he says in his first epistle that he writes to the young men " because they are strong," and strong by the strength of the divine life itself ; while in the same breath he indicates that such strength, though so long as it holds to its faith, it is strength divine, may be very closely allied to the strength of evil. For he warns these strong men who " have overcome the evil one," that if their strength embodies itself in the love of the world, it will pass away with the things of the world with which it is identified, and will be not the strength it seemed to be, but weaker than the weakness of childhood or age, and this just because there is a " pride of life " in it which there is not in the weakness of childhood or the hesitation of age. That there is a real risk in trusting to the strength of the young, the apostle evidently felt deeply ; but he also felt that it was a risk which the Church was bound to run, and ought to run, in its reliance on a much deeper source of strength. And surely that would also be the highest prudence of our own much too sober Church. It should not ensure itself so anxiously as it does against all possible risks, as if it had no higher strength in it by the help of which it could overcome these risks. There is such a thing as soberness which over-reaches itself. And if the Church be ever disestablished, it will be probably because it has over-reached itself in warding-off risks of loss so carefully that it has warded-off at the same time all the hopes of large and generous gain. Appointments, like that of Mr. Paget to the Regina Professorship of Pastoral Theology, are among the happiest omens that the temporal rulers of the Church will not over-reach themselves in their effort to guard against rashness and to regulate the dangerous enthusiasm of strength and youth.