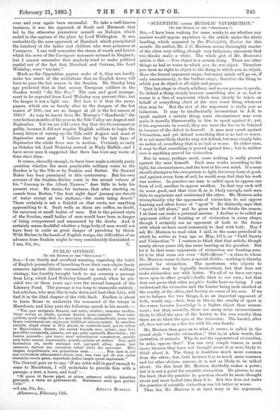 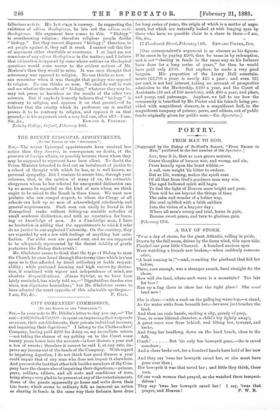 [To THE EDITOR OP THE " SPECTATO/L."J

Sin,—I have been waiting for some weeks to see whether any answer would appear anywhere to the article under the above heading, which appeared in the Fortnightly Review for this month. Its author, Mr. J. C. Morison, seems thoroughly master of the often very telling, though very fallacious, argument that two blacks make a white. The whole gist of Mr. Morison's article is this :—You object to a certain thing. There are other things as bad or worse to which you do not object. Therefore you have no right to object to the thing to which you do object. Here the formal argument stops ; but many minds will go on, if only unconsciously, to the further stage ; therefore the thing to which you do object is all right and proper.

This last stage is clearly a fallacy, and no one presses it openly. To defend a thing simply because something else is as bad or worse is a line of argument which may clearly be taken on behalf of everything short of the very worst thing, whatever that may be. But the rest of the argument is really just as fallacious. It may be intellectually inconsistent in A.B. to speak against a certain thing, some circumstance may even make it morally blameworthy in him to speak against it ; yet, if his arguments be sound, they are none the less to be listened to because of the defect in himself. A man may speak against Vivisection, and yet defend something that is as bad or worse. It is yet more likely that he may not defend, but may simply take no notice of, something that is as bad or worse. In either case, it may be that something is proved against him ; but in neither case is anything proved for vivisection.

But in many, perhaps most, cases nothing is really proved against the man himself. Each man works according to his light, his circumstances, and the bent of his own mind. If a man should attempt in his own person to fight for every form of good, and against every form of evil, he would soon find that his work was useless. In practice one man is called upon to oppose one form of evil, another to oppose another. In that way each will do some good, and that even if, as is likely enough, each man fails to appreciate and understand the other. Mr. Morison asks triumphantly why the opponents of vivisection do not oppose hunting and other forme of " sport "? He distinctly says that " sport is left alone," and he gives what he thinks the reason. I at least can make a personal answer. I decline to be called an opponent either of hunting or of vivisection in every shape, though I certainly am an opponent of both in the forms with which we have most commonly to deal with both. May I ask Mr. Morison to read what I said, in the same periodical in which he writes, as long ago as May, 1874, on " Field Sports and Vivisection "? I venture to think that that article, though nearly eleven years old, has some bearing on his question. But let it be that some opponents of vivisection are hunting-men, let it be that some are even " field-officers "—a class to whom Mr. Morison seems to have a special dislike—nothing is thereby proved for vivisection. The sportsman who objects to vivisection may be logically inconsistent, but that does not make vivisection one whit better. We all of us have our eyes more open to other people's faults than to our own ; but that does not prove that other people's faults have no being. I can understand the vivisector and the hunter being each shocked at the cruelty of the other, and having no sense of his own. If we are to balance the two things, I, as an impartial opponent of both, would say,—first, that in theory the cruelty of sport the worse, because knowledge is a higher object than amusement; but that, secondly, there are many more circumstances likely to blind the eyes of the hunter to his own cruelty than there are to blind the eyes of the vivisector. The hunter, after all, does not cut up a live fox with his own hands.

Mr. Morison then goes on to what, it seems, is called in the grand style " bucolic vivisection ;" that is, in plain words, the castration of animals. Why do not the opponents of vivisection, be asks, oppose that? For one very simple reason, in most cases, because they have not thought about it or were likely to think about it. The thing is doubtless much more common than the other ; but, both because it is so much more common and for other obvious reasons, it is not so likely to be talked about. On this head Mr. Morison decidedly makes a point ; but it is not a point for scientific vivisection. He proves, to say the least, that the practice in question should be more thought about and more looked into than it ie. But this does not make the practice of scientific vivisection one bit better or worse.

Thus far, Mr. Morison is at least wary in his argument, fallacious as it is. His last siege is unwary. In suggesting the existence of odium theologicum, he lets out the odium antiiheologicum. His argument here comes to this. " Biology " is overthrowing religion ; therefore religions people dislike "biology." But they cannot disprove " biology ;" therefore, to set people against it, they call it cruel. I cannot call this line of argument either charitable or courteous. I at least am not conscious of any odium theologicum in the matter ; and I believe that vivisection is opposed by some whose notions on theological questions would come nearer to the evident notions of Mr. Morison's than they would to mine. It was once thought that astronomy was opposed to religion. No one thinks so now. I can remember when it was thought that geology was opposed to religion. No one thinks so now. We shall do well to wait and see whether the results of " biology," whatever they may be, may not prove as harmless as the results of the other two sciences. But if anybody honestly believes that " biology " is contrary to religion, and opposes it on that ground,—if he believes that the cruelty which its professors say is needful proves it to be contrary to religion, and opposes it on that ground,—is his argument such a very bad one, after all ?—I am,