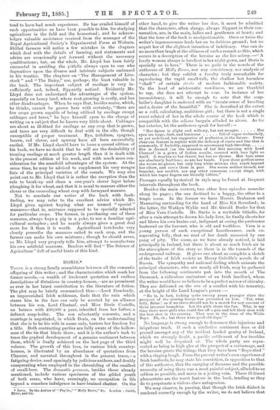 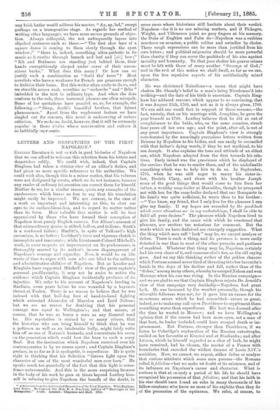 Toms is a strong family resemblance between all the romantic offspring of this writer ; and the characteristics which mark her former novels,—a wealth of irrelevant quotation and endless descriptions of flirtations in country-houses,—are as prominent as ever in her latest contribution to the literature of fiction. The plot may be briefly summarised thus : —Lord Dundeady, an impoverished Irish nobleman, finds that the ruin which stares him in the face can only be averted by an alliance between his son, Lord Clontarf, and Miss Doris Costello, an heiress with £40,000 a year, inherited from her father, a defunct soap-boiler. The son reluctantly consents, and a marriage is negotiated, in which Doris, on the understanding that she is to be his wife in name only, barters her freedom for a title. Both contracting parties are fully aware of the hollowness of the tie that binds them ; and it is the author's task to trace the gradual development of a genuine sentiment between them, which* is finally achieved on the last page of the third volume. The growth of this love, in various Irish countryhouses, is illustrated by an abundance of quotations from Chaucer, and narrated throughout in the present tense,—a fatiguing device, used sparingly by judicious authors, and doubly exasperating when employed in the chronicling of the smallest of small-beer. The dramatis parsons, besides those already mentioned, include various specimens of the gilded youth of both sexes, who have, seemingly, no occupation in life beyond a ceaseless indulgence in bare-brained chatter. On the

other hand, to give the writer her due, it must be admitted that the characters, often slangy, always flippant in their conversation, are, in the main, ladies and gentlemen at heart; and that the tone of the book is unobjectionable. Once or twice the writer's ingenuousness leads her on to dubious ground ; but we acquit her of the slightest intention of indelicacy. One can do no more than laugh at the silliness of such a remark as this, which occurs in a description of the heroine as she lies asleep :—" A lovely woman always is loveliest in her night-gown, and Doris is

specially so in hers." There is no guile in the novels of the authoress of Molly Bawn, nor any consistency, nor analysis of character ; but they exhibit a faculty truly remarkable for reproducing the vapid small-talk, the shallow but harmless " chaff " of certain strata of modern fashionable society. To the level of aristocratic rowdiness, we are thankful

to say, she does not attempt to soar. In instance of hes inconsistency, it will be enough to note that the soapboiler's daughter is endowed with an "innate sense of breeding and a desire of the beautiful." She is described at the outset as a cold, calculating, ambitious girl ; but there is not a single event related of her in the whole course of the book which is compatible with the odious bargain alluded to above. As for her exterior, let the authoress speak for herself : —

" Her figure is slight and willowy, but not meagre Her

eyes are large, dark, and luminous full of vague melancholy,

as yet undefined, but suggestive of perfection in the future. Every clear-cut feature is replete with the delicacy of curve and line that is commonly, if foolishly, supposed to accompany high-breeding. ..... She is dressed [on the occasion of her first meeting with Lord Clontarf] in a gown of Indian muslin, covered with lace light as itself. It reaches to her throat, but has no sleeves. Her bare arms are absolutely faultless ; so are her hands. Upon these perfect arms she wears no gloves, but only long white mittens that roach beyond her elbow, and cover them in part. She wears neither brooch, nor bracelet, nor necklet, nor any other ornament except rings, with which her taper fingers are literally hidden."

Passages equally hysterical in style may be found at frequent intervals throughout the book.

Besides the main current, two other love episodes meander along its pages ; the one destined to a happy, the other to a tragic issue. In the former we have Messrs. Brabazon and Mannering contending for the hand of Miss Kit Beresford ; in the latter, Sir Watkyn Wylde and Mr. (Jerald Burke for that of Miss Vera Costello. Mr. Burke is a veritable Othello, for

after a vain attempt to drown his lady-love, he finally shoots her and blows his own brains out, indignant at seeing the preference bestowed on the baronet, who is old and toothless. Vera is a young person of such exceptional heartlessness, such ex

asperating folly, that we read of her death unmoved by one pang of pity. The scene, as we have already noticed, is laid principally in Ireland, but there is about as much Irish air in the atmosphere of the story as there is in the tunnels of the underground railway. It gives one about as complete a sketch of the traits of Irish society as Henry Greville's novels do of Russia. The sympathy and national feeling which animate the principal characters, who are nearly all Irish, may be gathered from the following sentiments put into the mouth of The Desmond, a ridiculous caricature of an Irish landlord, whom the writer would have us believe to be a perfect mirror of chivalry.

They are delivered on the eve of a conflict with his tenantry, at the height of the Land League's power :

" Ho is, in fact., looking quite twenty years younger since the prospect of the coming fracas was presented to him. Tut, what folly, Brian ! as if we three should not be a match for any amount of these ignorant bumpkins. Let the girls share the fun. Why, in my time there were girls who could fire off a gun and kill their man with the best shot in the country. That was in the time of the White Boys. Eh, eh ; but those were good old days.' " No language is strong enough to denounce this injurious and iniquitous trash. if such a vindictive sentiment does or did prevail amongst any of the resident landed gentry of Ireland, which we strongly doubt, a pacific settlement of her troubles

might well be despaired of. The whole party are represented as being in high glee at the prospect of a scrimmage, and the heroine greets the tidings that they have been " Boycotted " with a ringing laugh. From the present writer's own experience of Irish landlords, he may state his conviction, in opposition to that of this authoress, that the carrying of firearms and the possible necessity of using them was a most painful subject, alluded to as seldom as possible, and never in a jesting vein. These ill-timed pleasantries are the worst feature in the book, tending as they do to perpetuate a vicious class antagonism.

We may observe, in passing, that though the Irish dialect is rendered correctly enough by the writer, we do not believe that. any Irish butler would address his master, "Ay, ay, lad," except perhaps on a transpontine stage. As regards her method of writing other languages, we have more secure grounds of objection. Always colloquial, she not infrequently lapses into slipshod sentences such as these :—" The first slow bars of a square dance is coming to them slowly through the open window ;" " there is, indeed, something ultra-pathetic in its music as it rustles through branch and leaf and [sic] how ;" 4' Kit and Brabazon are standing just behind them, their bands surreptitiously clasped under cover of their unconscious backs." What does this mean ? Or how can we justify such a combination as "florid tho' terse "? Most novelists who have a weakness for French are generous enough to italicise their loans. But this writer often omits to do so, and we stumble across such novelties as " recherche " and " Bebe " imbedded in the text in ordinary type. And when she does conform to the rule, these borrowed phrases are often misspelt. Some of her quotations have puzzled us, as, for example, the -following :—" Sleep, death's beautiful brother, that fairest phenomenon." Apart from the unpleasant feature we have singled out for censure, this novel is undeserving of serious criticism. We make no doubt, however, that it will be extremely popular in those cis ales whose conversation and culture it so faithfully represents.